Transport is at the core of any travel experience for me. If you can’t get to a place, then you can’t see it. And beyond a bit of culture shock the biggest hassles of traveling is the transport, so it is good to know how to get around. This is as important at the macro level (long distance trains and airports) as the micro level (taxis and how to cross the street). Every region has differences at the local level. Tuk-tuks are a common site in Thailand (and Cambodia), but here is a bit about the other forms of local transport we ran into in our weeks in southern Thailand. 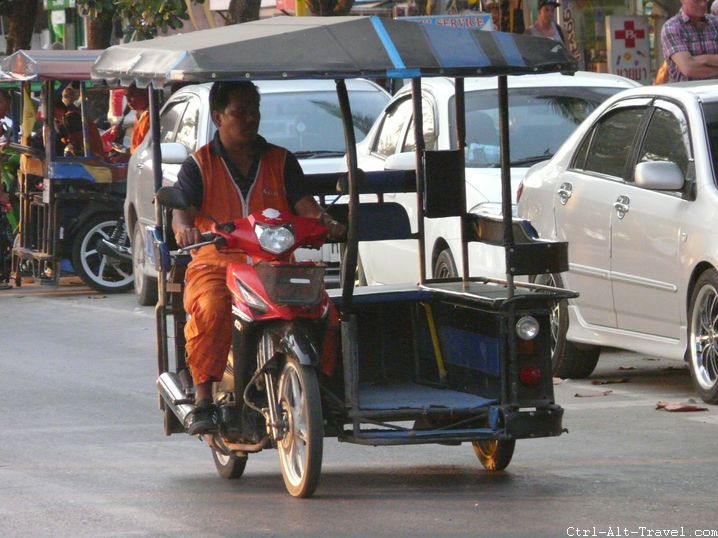 A “standard” tuktuk is essentially a motorcycle with seats attached somehow. In Ao Nang near Krabi, the motorcycle had a set of seats bolted to the side. In Cambodia, the motorcycle pulled a trailer with the seats seats. They were both covered, but had open side.s

These are common and decent for short-distance transport. Haggle with the driver for the fare before getting in and hang onto your hat/purse/bag as you go. Not only due to the wind, but while we didn’t have any issues at all we heard stories of thieves pulling things from moving tuktuks. If you are sensitive to dust/car exahust, bring a scarf to cover your nose.

There is pretty much no way to avoid seeing or using these in the region. They may seem unsafe, but they really don’t go that fast. 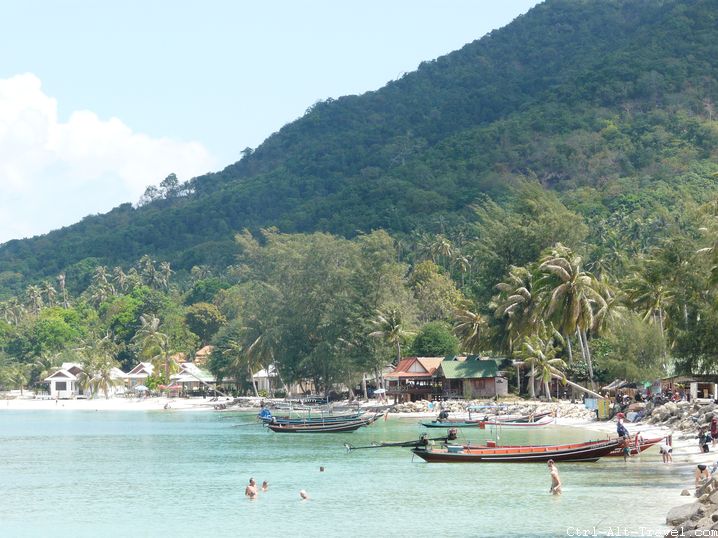 The tuk-tuk is apparently so named due to the distinctive put-put-put sound that the ubiquitous two-stroke motor makes. So when you strap one of these motors to the back of a boat and put Ali and I into it, we of course call it a Boat-Tuk. I’ve not been to the beaches of Northern Thailand, but we saw them everywhere around Krabi/Ao Nang as well as along the the island chain on the east.

The real name of these boats is “Longtail” due to the propeller sticking so far behind the boat. They sit anywhere between 6 and 20 people depending on boat size and how packed you want to get them. They are commonly used for island tours, but don’t discount them as simple point-to-point water transport. Use them to get between islands and around the inaccessible parts of the rocky coast.

Like with a land tuktuk talk to the driver about price. You can often rent the entire boat if you have a specific destination, but if it is a common destination you can get a cheap ticket with a bunch of other people. The downfall is sometimes you have to wait until the driver finds enough to fill his boat.

And then we come to Songthaew’s. Songthaew apparently means “two benches” in Thai and describe the vehicle well. It is usually a pickup truck similar to anything you would find in the US, though with the bed replaced by a pair of wooden benches and covered by a high arching cover. These seem to be used for longer distance travel than a tuk-tuk, often it seemed with regular routes.

The interesting thing was that there seemed to be no limit to the number of people that could be crammed into one. Maybe four on each bench, then a few crouched in between and then the hanging began. People standing off the back hanging on were super common.

We started off calling these things Truck-Tuks, because we had already mentally established local transport as being a “tuk” regardless of the actual motor(no put put sounds, these were normal car engines) and the things are converted pickup trucks. However we switched to calling them Bus-Tuks due to the number of people that could be transported.

We also encountered Moto-Taxis one night in Krabi. Pretty much it is a guy on a motor bike with an “official” looking jacket on. We had a restaurant owner talk to them in Thai and hoped they understood our destination. We all agreed on a price and then Ali and I each got on the back of a motorcycle and off we went. I held onto this stranger without any safety gear and closed my eyes hoping we made it back to our hotel safely. That was the end of a super crazy night and fit, but I’m not sure I would use them commonly.

Don’t let this post make you think of Thailand as only rustic. We definitely sat in vans and big air-conditioned buses as well as jetboats. Transport in our time in Thailand was pretty good. We always got where we were going even if it wasn’t necessarily on the time frame we expected.

So we live most of the time in Germany and are very used to timetables and everything running to them. Thailand doesn’t do this at all.

That isn’t to say that the transport isn’t reliable. We never got forgotten completely. Timing just isn’t an important quality it seems. Flexibility and adaptability is a crucial trait for the traveler. We often had tours booked with a specific time to be picked up. In standard German form, we were early on the curb and then got stressed when the truck didn’t come by for half an hour. The thing is, even them picking us up late didn’t mean much. There was plenty of time before the actual tour and we were fine.

Songthaews even on “regular” routes didn’t seem to run exactly to time, though closer than most transport. Long distance buses were better, but may stop randomly to let someone in or out on the side of the road. Boat tuks might sit there for an hour waiting for the 8th person or might go early because “hey it is full.”

We really just had to reach into ourselves and work on being more relaxed like the locals. It worked on every occasion to get us where we wanted to go.