I am not a foodie!
Seriously, no. My tastes are base and simple. I often find having to eat annoying and a lot of stuff is way too fancy for me. I would be just as happy with a beer and a waffle as a meal that takes sentences to explain. Despite all of this, I do like the artistic side of food and travel blogging has taught me to take pictures of stuff I eat.

So although I did a big philosophical review of 2012 on Grounded Traveler, here is a look at our year of travels expressed in food. 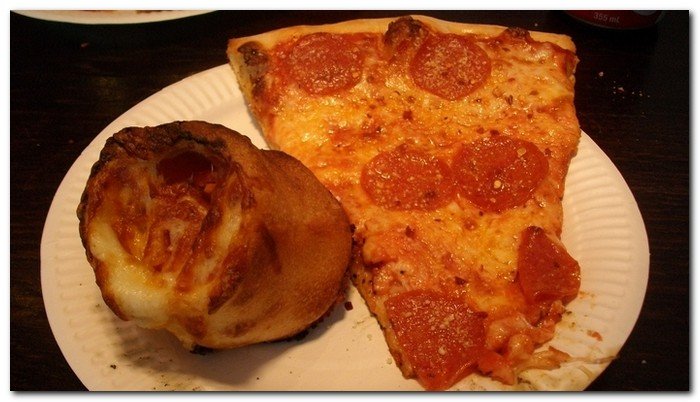 In January we were in New Zealand and had the best pizza since we left the US. Nice greasy New York Style pizza, found on K-Road in Auckland half the world away from home at a place called Sal’s complete with red vinyl booths. Ali and I ate here every day while we were in Auckland it was great. Actually New Zealand was almost like eating back in the States. The places we felt drawn too were simple and not froofy. This reflects a bit of the New Zealander people that I know as well.

We went to Turkey in April for a two week honeymoon trip. Despite not being a foodie, I really quite enjoyed eating here. The food was honest and simple and good. My favorite was the Iskender Doner on the left in the picture. It is made of meat and bread with some fries cooked in a tomato sauce. Baklava, Pide and just the wonderful bread everywhere round out the picture. Though doner’s are common and awesome, there is more than that to the cuisine.

Interacting with the people through food was good as well. We ordered all manner of things in English and hand gestures and pointing. We managed money without language and enjoyed the spicy sprinklings on every table. Street food is where it is at in Turkey.

At Home – Pancakes and Popcorn

We do travel a lot, but we spend even more time at home in Freiburg. We like movie night with popcorn a few times a month and I really miss pancakes, so I made an attempt with the bottle mix you can get in the stores here. Not great, but it was ok and definitely reminded me of a Sunday morning at home. Travel in the mind.

Towards the end of May there is a fantastic European event, the Eurovision Song Contest. This year we decided to invite a bunch of friends over to watch it. We really had no clue how hilarious it would end up being. Having a few people reading twitter feeds helped as did, I am sure, the alcohol. In any case it was a grand night of mirth with friends.

My friend Sara brought a lot of food to represent the countries in the show. It was like travel, with food from far away places as well. 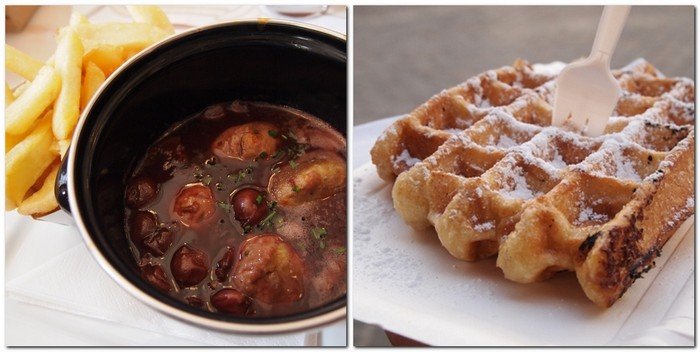 Late summer saw us traveling again. A train trip to Brussels for a short Press Trip and then heading down to Barcelona. Brussels had some great food, more than I had expected. Waffles are definitely one of my favorite foods and they are everywhere in the city. Frites are one of the most well known foods in Brussels and also everywhere. Beyond waffles and frites was one meal with meatballs that was awesome.

On our last day, we were eating in the cafe of the Comic Museum. I ordered meatballs in cherry beer sauce with fries. It was awesome. We had been to some fancy places the past few days which were fine, but this was simple and wonderful. 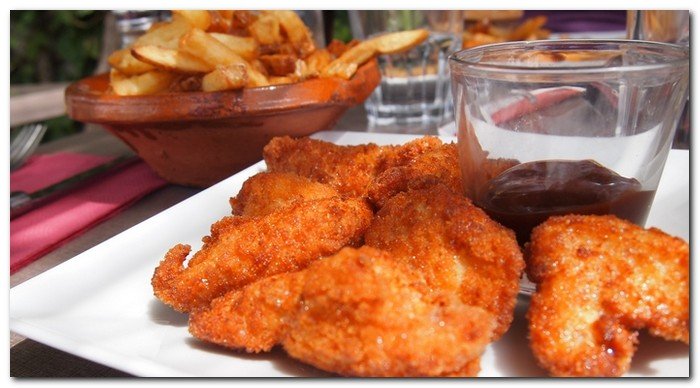 I almost always have a problem eating in France. I have yet to find the trick to finding simple food. Restaurants always seem to be way too fancy and froofy, even the little bistro’s in Paris. Walking around Carcassonne, we found a place that advertised Tapas off in a courtyard next to the keep, which sounded it ok. I ended up ordering what amounts to chicken nuggets with dipping sauce and fries. It was pretty good. Not sure the waiter thought so much of me ordering it, but I was happy. Still a bit on the fancy side, but nice not to have it out of the freezer and into the microwave. 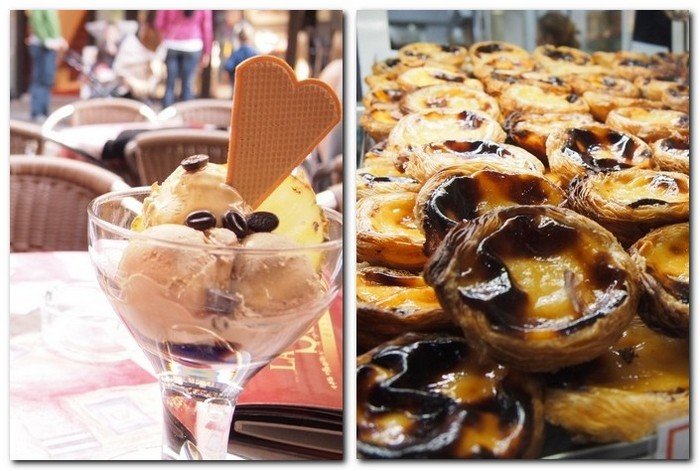 Not every trip is long and we took a number of shorter ones this year as well. March saw us preparing for our Turkey trip with a daytrip to Baden Baden to try out new cameras. Despite being the end of March it was a warm enough day to have the first fancy ice cream of the season.

The end of our summer travels saw us with a single night in Lisbon. Although we were only there a few hours, we both loved it. The traditional pastries that get mentioned in a lot of the brochures were not as common as I had expected as we were walking around. I tried one and they aren’t really my thing. We loved Lisbon and it is on the top of our list to go back.

The last place we went to in the year was Frankfurt for the beginning of the Christmas Market there. We joined a lady at the tourism board for a traditional applewine tavern lunch which was great. Potatoes and green sauce go well with the apple wine. Then we wandered into the market and found that they have hot applewine there as well. It was a busy, nearly overwhelming weekend, but good.

Travel is NOT about the food for me. I like (sometimes overly) sweet stuff and I like simple food. Oh, and I like beer. You start putting too many ingredients or too many vegetables on my plate and you have lost me. Despite which, I need to eat and I do really like seeing other cultures through their food.

Are you a foodie? Do you travel to eat or just eat while traveling?