I make no secret of my interest in doors when traveling. They are one of my favorite subjects to take pictures of. I have hunted doors across Europe from blue doors in Santorini to doors in Spain. What I notice occasionally is that that some doors have really beautiful knockers too.

Most modern doors have given up on knockers for the door bell button. Even if there is a knocker, it is often just a ring set into the door without creativity. Then there are the beautiful knockers. The works of creativity set in stasis on the door.

I found this smug lion knocker in Porto, Portugal. A bit dirty, but still quite neat. Not so fearsome as to scare off visitors, but more of a humorous lion to me. 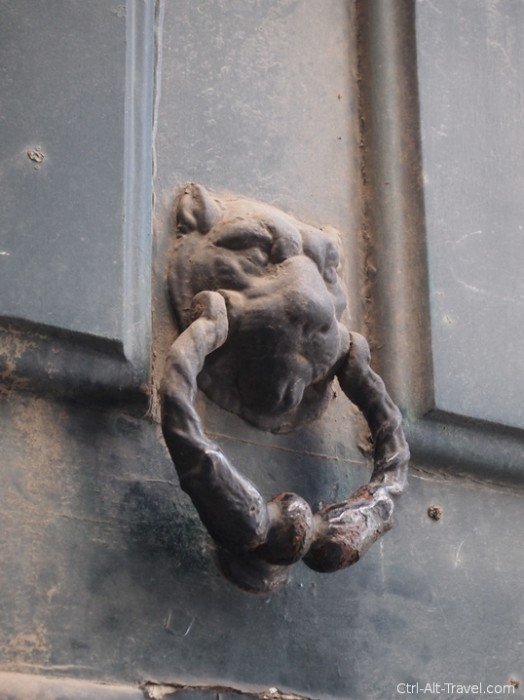 This face found in Bamberg, Germany a few years ago instantly reminds me of a scene from the 80’s movie Labyrinth. Two doors with talking knockers each have rings in different places. One through the ears so was deaf and one like this one in the mouth so he couldn’t talk with it in. 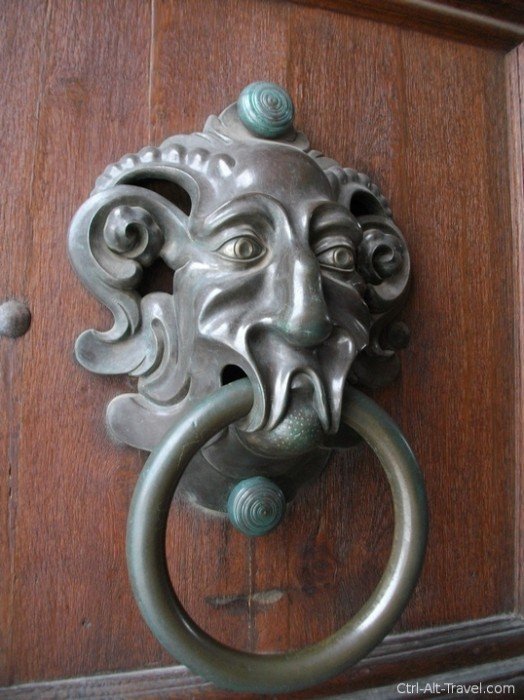 This is one of a pair of knockers in Assisi. Each door had the same face of a woman with the ring through her ears. I picked this one of the pair for the letter slot. I like post boxes as well as doors. The effect of the metal knocker and slot stand out nicely against the wood grain of the door.

While many pretty door knockers are some form of face holding the ring, this one in Brussels is a hand. I like the echoing of what you would door if there was no knocker. This is reality into brass in a way.

I find doors fascinating. Just the simple utilitarian requirement of every building has so many shapes, forms, colors and styles. The architecture of a place is as defined by the doors as by anything else for me. This in itself is a hallmark of Ctrl-Alt-Travel looking at a detail to define the whole. So it is neat to be able to look at details of doors to help define the whole door as well.

And I am not the only one to see beauty in knockers. Check out these and more here, both from the same site and primarily in Italy. Her’s from Lucca looks nearly identical to mine from Assisi and a number of hands similar to the one from Brussels.