I like the small details of things. The little bits that bring something to life and make it more than functional. It is one of the reasons that I like the Art Nouveau period so much. While we were in Brussels, we went through the City Hall to a balcony to get a good view of the flower carpet from above. The City Hall building is a magnificent building all gothic spiky and just covered in statues. Even the little pedestals have small statues on them. This was a building that just screamed “detail” at the top of its architectural lungs.  Here is a brief look to show you what I mean. 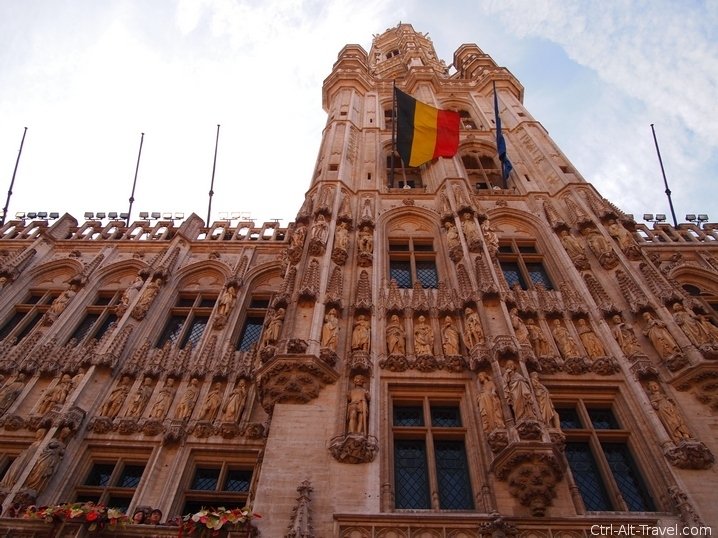 Details really only make sense and are impressive as a part of a whole. This was a grand building with just stacks of statues looking out from every possible surface. And really unless you actually got closer and looked, even the larger statues are lost in the whole not to mention the tiny ones. 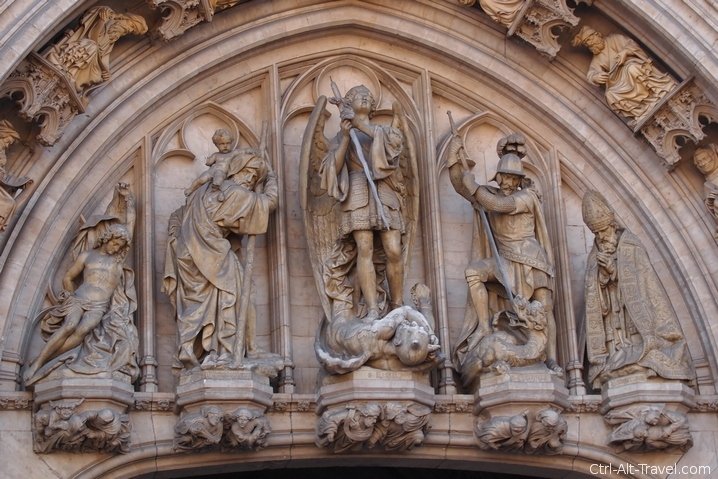 This was over the entryway into the central courtyard. Even this was amazing in the detail and story. Even in the main motif there are at least one angel, two different slayings of things, a bishop and a guy with a staff. Ok, I am sure there are names and stories behind each one, but in my haste to get the shot I can’t read the names underneath. As an example of the detail within the detail, check out the pairs of guys sticking out from beneath each main statue. And this just as you are walking into the place.

Ok, I have a bit of a thing for doors. Ali has started pointing out interesting ones to me as we travel. So when I say this door in the door I had to have it. It is actually a typical thing in places where the main doors are pretty massive. It makes no sense to open them up for a single person to go in or out.

As we were waiting to start our tour of the city hall and head up to the balcony, I caught a shot of this finely detailed door handle. Seriously even the door handles are ornamented in this place.

I quite liked the perspective on this one. Looking up at the next row of statues above us from the balcony this guy was surveying the square. I really have no idea who any of the people sculpted were. I imagine they were prominent citizens at the time the building was put together.

And your little sheep too..

So to get to the detail within the detail here is my best example. Each of the larger statues, like our knight friend above, sit in little alcoves on the side of the building which protrude slightly. What I found so fascinating are the little statues underneath the larger figures. The stone under each alcove had these little figures. While the larger figures seemed to be prominent or noble personages, the little statues were of more menial scenes. Here is a shepherd with slightly creepy eyes and a woman selling fruit.

This is my favorite picture of the lot. Again I have really no idea who any of these people were, but I imagine this one was a queen or noble lady at the time. Being carved in stone does a wonder for the complexion. I have always been fascinated by how stone can be carved to represent the soft folds of cloth even. And even though this is shot in color, the tons are all gray.

So from a massive building in closer to the minute details. A look at the statues of City Hall in Brussels. I really like looking at such things in this kind of detail. According to the Brussels city website, the statues were added in the 19th century on top of the 15th century gothic building.

Balloons in Cappadocia Turkish Food – Beyond the Döner Kebap