One common complaint of beer is that it is too bitter. Have you ever had sour beer though? I hadn’t either until we went to Cantillon brewery in Brussels.

The operation is small and does not look like much from the outside. We even thought it might be closed, but tried the door anyway. It opened and let us into a space at the front of the brewery which was part restaurant-style tables and part store. Casks and wooden crates of bottles can be seen down the long hallway and through the open doors. This was not a separate part to to the brewery, but more of a space carved out of it for the purpose of accommodating guests. We had entered the land of Lambic. 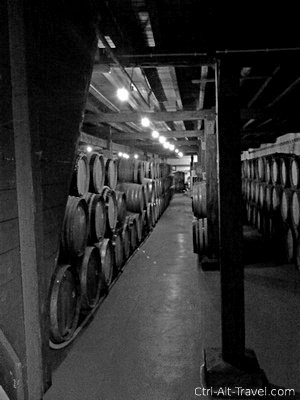 Cantillon is the oldest brewery in Brussels which remains active and specializes in spontaneous fermented beers called Lambic which are quite sour. It was founded in 1900 and is still family run. It still uses the old equipment to produce its beers.

Our visit to Brewery Cantillon was self guided with a brochure from the front desk. After so many guided tours with glass walls between you and what you are seeing, it felt somehow wrong to just be wandering unaccompanied through their business looking for the number plaques to match to the book and arrows to guide us. Wrong in an awesome way though.

We wandered through for about 20minutes and although we could have spent a little longer, I did not feel like I missed anything. It was quite fascinating to see both the modern and old crammed happily next to each other. The smell of the place was great. 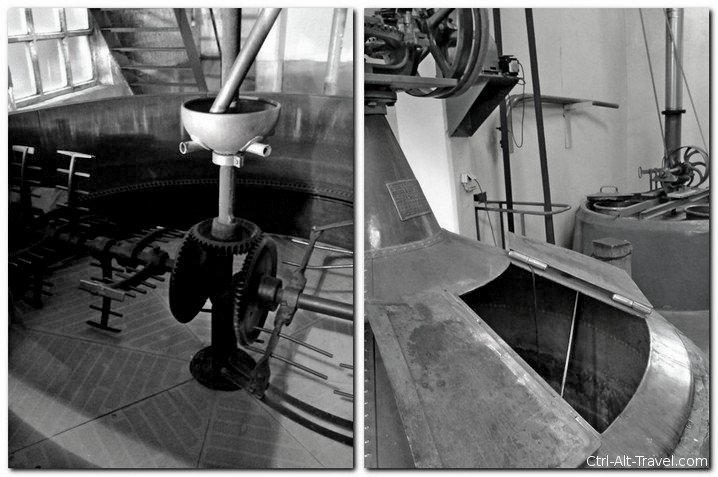 Cantillon makes a specific type of beer, Lambic, and in the traditional manner. From the brochure, the main difference between Lambic and other beers is the yeast. Lambic uses wild yeast to do the fermentation. This means at the point that other beers are getting specific yeasts added, the Lambic is left open to the air in a specific room for the night. It also takes a lot longer to complete, 3 years for full fermentation at which point it is still, not fizzy. The wild yeast also is what makes the beer quite sour. This was a surprise as most beers end up toward the bitter side of things. Lambic is also based on a mix of wheat and barley so in German Beer Language, a form of wheat-beer.

This Lambic is also the base of the rest of their products. Gueze is a blend of 1,2 and 3 year old Lambic. The younger beers are sweeter and still have some fizzy, so the Gueze is sweeter and smoother but still retains that Lambic taste. Kriek is a fruit beer. Fruit is added to 2year old Lambic and allowed to sit. After several months the beer has acquired the taste and color of the fruit. More young Lambic is added for further fermentation and it is bottled. Cantillon does not sweeten it beyond what the fruit provides, so like the others it still retains the sourness.

I had asked about Lambic and Kriek while we were at De Pelgrim brewery in Rotterdam a week before. The brewer there mentioned that the yeasts needed are quite persistent. If you introduce them into a tank, they are difficult to remove and would make other beer sour as well.

As a part of the tour at the end there are samples (of course). We each had a glass of Lambic for our first sample. It might be quite refreshing on a summer afternoon and reminded me of the Applewine we had in Frankfurt, but was indeed quite sour. I tried a Gueze and Ali a cherry Kriek for our second. The Gueze was better and the Kriek was quite drinkable, but I don’t think I could have a lot of it.

As with most traditional processes, there are now modern processes with make product much faster and to mass market tastes, but without the tradition and often to reduced quality. So it is with Lambic and Kriek as well. Industrialized and sweetened products have impacted the smaller breweries leaving Cantillon as one of the few remaining.

I really like Belgium for its beer. I was fascinated by the brewery and the process for making this traditional style of beer. Even the science of how it works with wild yeast was interesting. I am quite happy to have tried the beer, but the sourness that makes it unique was just not my taste for drinking more than a glass. I am probably typical of the people that prefer the more sweetened modern Krieks, but I still hope they are able to survive to show off this unique beer.

Cost: The self guided tour was 6€ each which included the samples at the end.
Opening Times: 9-17M-F and 10-17Saturday. We arrived after 4pm and had to rush our tour before they closed just after 5pm. Try to give yourself more time.
Finding it: It is an odd feeling neighborhood(not unsafe feeling, but definitely not touristy) near the Midi Station in Brussels. The building is also somewhat unassuming and doesn’t really look like a brewery. There is a sign on it though. Check on their website for maps and directions as well.

Castle Gravensteen : A Castle as I Wanted It to Be Rotterdam Boijmans Museum : A Quirky Sort of Place