Castle Gravensteen : A Castle as I Wanted It to Be

Home » Europe » Belgium » Ghent » Castle Gravensteen : A Castle as I Wanted It to Be

On the edge of the center of Ghent is Castle Gravensteen. This was one of the best castles I have ever visited. By best, I mean that is represented what I wanted to see of a castle. How I wanted it to feel.

I have mentioned a few times about traveling as a 12year old. This was one of those days. The experience was geeky, fun and well worth a daytrip from Brussels to Ghent. 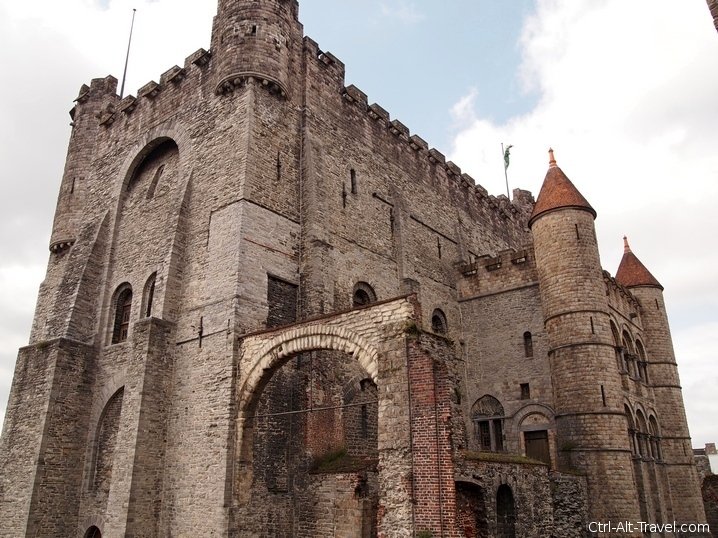 Gravensteen just looks like a proper castle to me. It has an outer wall and a large central keep. There is a moat on one side and the jagged crenelations on every wall and tower. In short, it is what the child’s mind’s eye pictures.

Inside the rooms have been restored, but mostly not over decorated. There are plaques with numbers and descriptions as you walk through the various rooms that compose the tour. Upstairs a few rooms have been turned into a tiny museum of torture instruments and one room was a set of boards showing the history of the place and how it looked at various stages.The kitchen area had a display of what it might have looked like as well.

Mostly I just liked walking around the place and ignored most of the museum aspects. 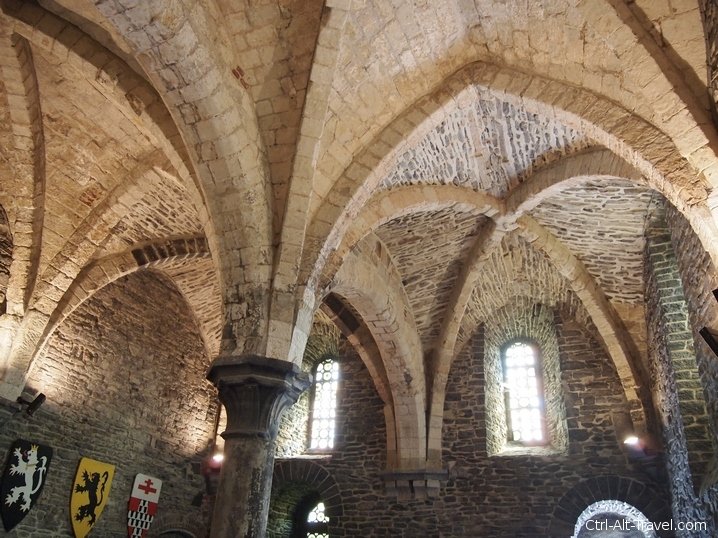 The most interesting part of the castle for me was the armory room. Glass cases scattered about had examples of weapons from several time periods through which the castle was manned. These range from maces and flails to swords and pikes, with some examples of early firearms at the far end. 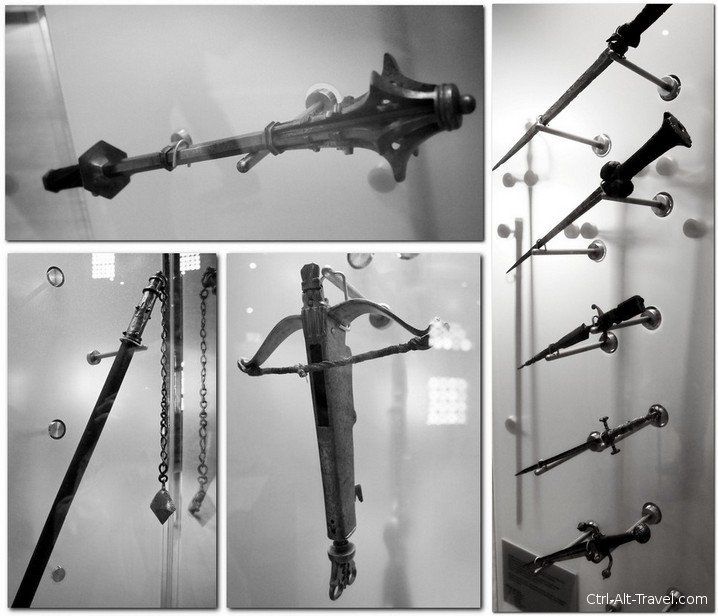 Weaponry, page 45 in your Player’s Guide

This was cool in itself of course, but what made it extra awesome was how they were displayed. A typical case like for the daggers, had several different types and styles all at the same angle with a white background. It looked like a page out of a DnD guide. Seriously, I could imagine text with damage numbers and swing modifiers off to one side.

The labels are all in Dutch though. I did notice that they had a desk where you could borrow a laminated card in other languages which described the cases. I read a little, but didn’t pick one up. I would recommend it though. Especially if you wanted to know more history and were not just geeking out amidst the cool old weaponry and armor. 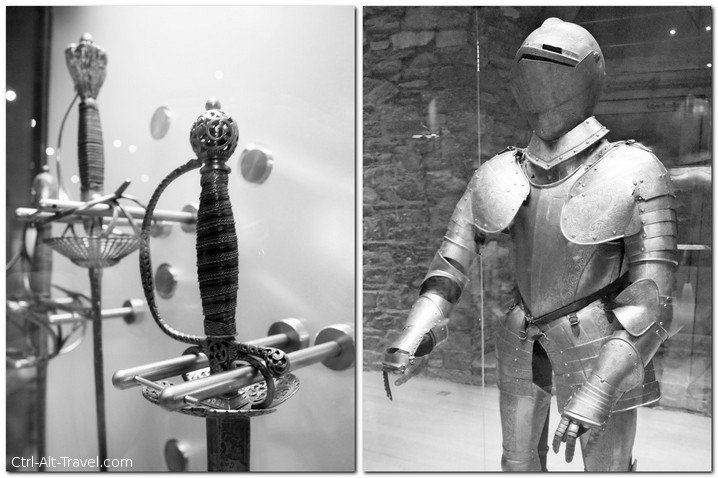 In addition to the armory, you can get all the way to the top of the keep (main central building) and walk the outer walls as well. The day we were there it was very windy, thus not so pleasant to be up there for long, but the view was cool. You can see the rest of Ghent (under construction.. look at the lovely view of the cranes) and down into a little square across the road from the castle. 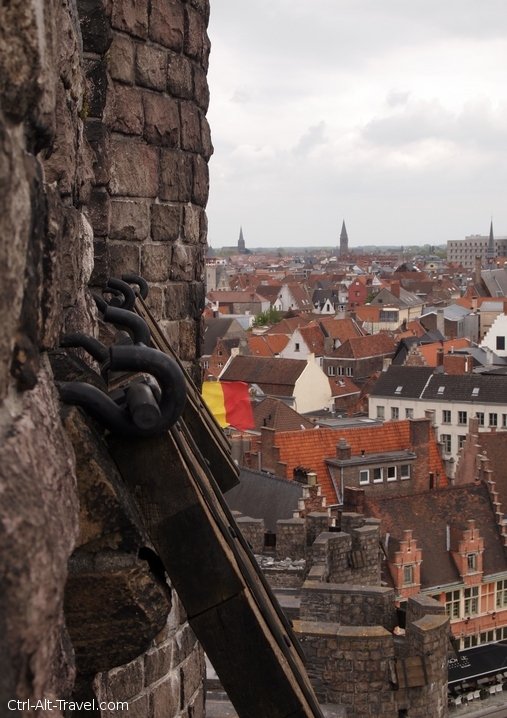 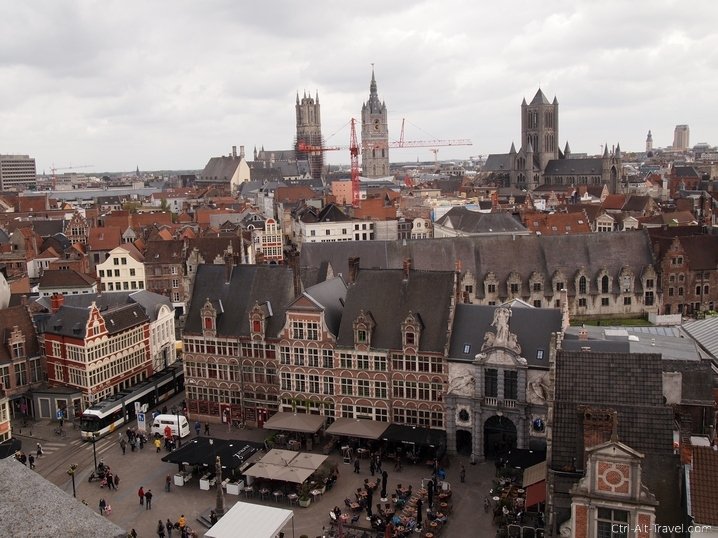 History and the Cool Effect

The castle started as a stone house in the 11th century and was turned into a more fortified building in 1180 by a Count of Flanders. The black lion on a yellow background, the count’s coat of arms, is on flags and shields around the place. Apparently the structure and shape we see today is still the one from then, though through the lens of the late 1800’s restoration team, which is probably why it looks so cool. It thus has that era’s romanticism behind the design. Carcassonne was similar in that respect and looks cooler for it.

The Counts of Flanders used it until the 14th century and then as an administrative center and court of law from the 14th to the 18th century.  Like most castles it has been used for other purposes as well. I saw prison, worker housing and cotton mill listed. In the late 1800s, it was bought by the city and restored. (This history is paraphrased from the plaques I could read and some pictures labeled in Dutch that I could not read.) 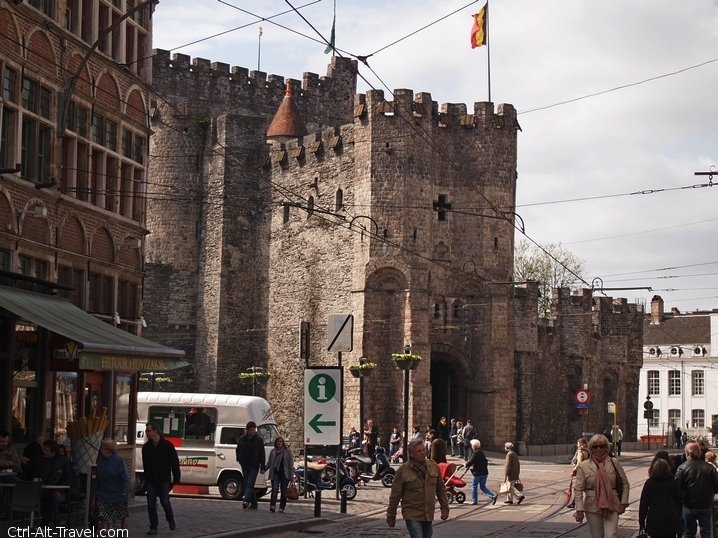 The Castle I Wanted To See

We like castles. Ali and I both had “see castles” as a goal for our summer trip. We started in Vianden, Luxembourg which was ok, but somehow more of a museum than I had hoped. It had been restored a bit too modern for my tastes. We went to Tiefburg near Heidelberg last year. It is also neat, but not restored enough and felt more like ruins.

Ghent’s castle retains that medieval feel and yet felt complete. The craggy violence of its shape just feels better, more like what it should be according my inner child’s eye. The armory helped that impression.

I know history is important and there is a point to restoring things as they were and not as someone thinks they should be, but this was awesome to see. And awesome that they did restore it. Ruins are only so interesting and in the end one pile of rocks looks just like another. I really enjoyed our few hours wandering around. Only hunger and a chill wind kept me from spending more time feeling like a king (err count) in the castle.

Check out Laurence’s post about other things to do in Ghent. We used his post as inspiration for coming out here even though they didn’t make it to the castle. 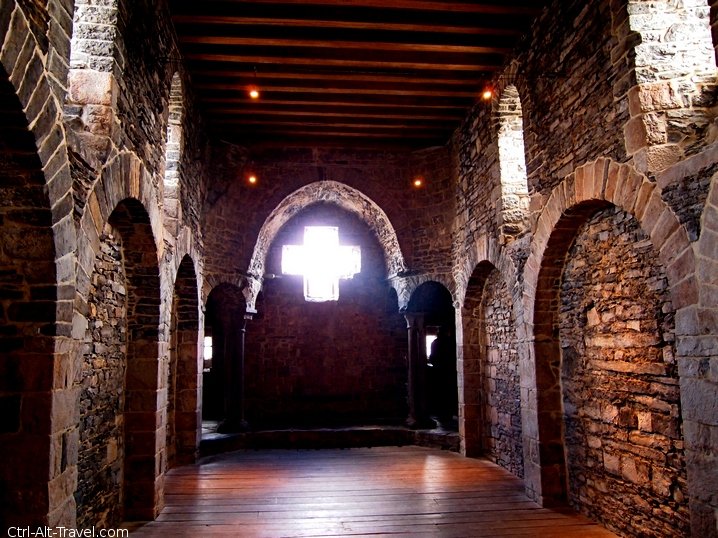 Entrance cost 8€ per adult with various reductions offered for young people.
The tour is just following the numbered signs. There is supposedly a movie guide as well, but I didn’t see how you would get/experience such a thing.
Getting There: We took tram 1 in from the train station. Get off at the castle stop, which is right in front of the walls and quite hard to miss. If you are already in Ghent, the castle is a short walk from the center squares.

And there were Waffles