Dusk is a magical time anywhere. The sky takes on radiant colors. Shadows make buildings look different. The light gets softer. In hot places, it means people start venturing out so even the human landscape is different. This time is especially photogenic for a town as inherently intriguing as Dubrovnik. Fading light often makes photography less reliable, but found enough pictures to show what it is like.

A Time for People Watching

It is the end of the day for some. They are heading back to their buses, hotels and boats either to go to the next destination on their trip or just change clothes and rest up for nightlife. Dusk usually means cool, so for others it is a time to come out of the shade and enjoy the city. So dusk is a wonderful time for people watching, which is one of my favorite activities.

Like many of the cities along the Croatian coast Dubrovnik was built by the Venetians. They liked to use marble as a building material. So it struck me that in so many places here you could walk around in bar feet on the smooth marble streets and feel like you are in the biggest marble bathroom in the world. This shot shows both the people wandering and the reflections of the marble. 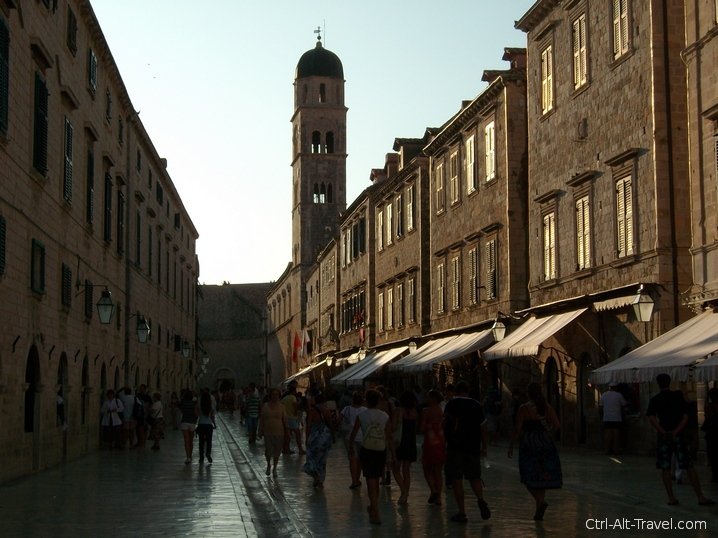 When I was in Dubrovnik, we had two days. Yet one of them were took a daytrip to Montenegro. That was a long day, so we were heading back to Dubrovnik as the sun was getting low. The hills rise steeply around the town so driving in we were way above the town. Thankfully we stopped and I got these shots from above. 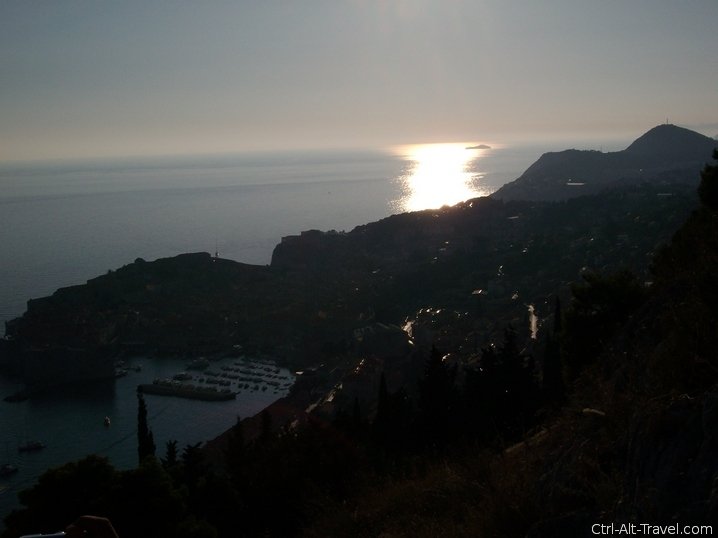 And here one from the same vantage, just zoomed in on the city more. Although it feels a decent size while wandering around in it, the old town is pretty small, huddled in its walls.

Dusk is awesome in that it is transitory. The colors only last a few minutes and darkness closes in. There is an enjoyment in knowing it can’t and won’t last long. Even still, places are often just as pretty in the beginning of the night. Here the walls of Dubrovnik right after dusk has given way to night.

Dusk is a time for some of the best colors in the sky. The reds and oranges vary every day. Sunsets also cast a lot of things into silhouette like the tower. This seen from the harbor as we were walking around. I really like this picture. So much so that I put it up as a postcard on Grounded Traveler a few weeks ago.