Nice Castle Hill : Looking Down on the Riviera From Above

Home » Europe » France » Nice » Nice Castle Hill : Looking Down on the Riviera From Above

Nice is one of the most well known towns on the French Riviera. It is a beach town between Cannes and Monaco. Watching the people and reading the menus, you definitely get the feel of it as being a high style and touristed place, though Nice has a historical aspect too.

If you happen to come to Nice for just the beach and the warm, take some time to look around. Looming above the old town is Castle Hill, the site of the castle that was. Just like in Freiburg there is no longer a castle, but it is a great place to wander around. And if you are not up for the stairs, check out the elevator near the beach. 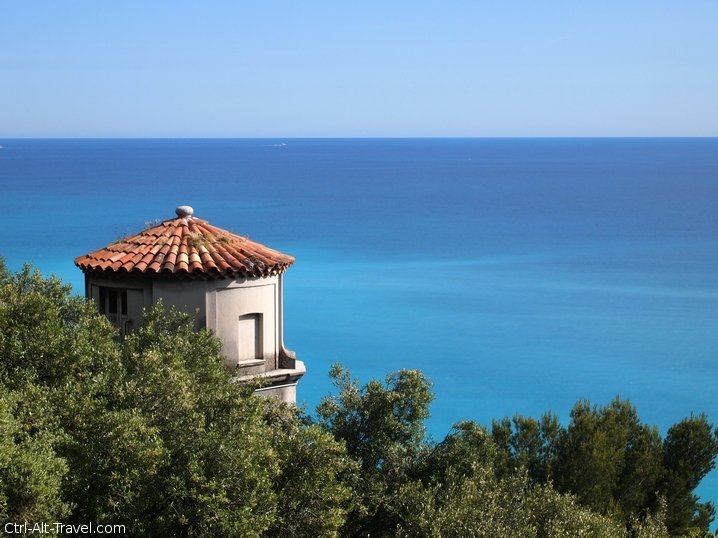 Views of Old Nice from Above

There are a couple of snack bars and shops up top. One section has of archeological interest, another a playground and there is a waterfall as well, but mostly you go to the top of castle hill in Nice for the views. The views of the town and the water, even the view up toward the coastal mountains. And seriously, what great views they are. There are a few look out points along the paths and on top of the waterfall that look out over the city and region. 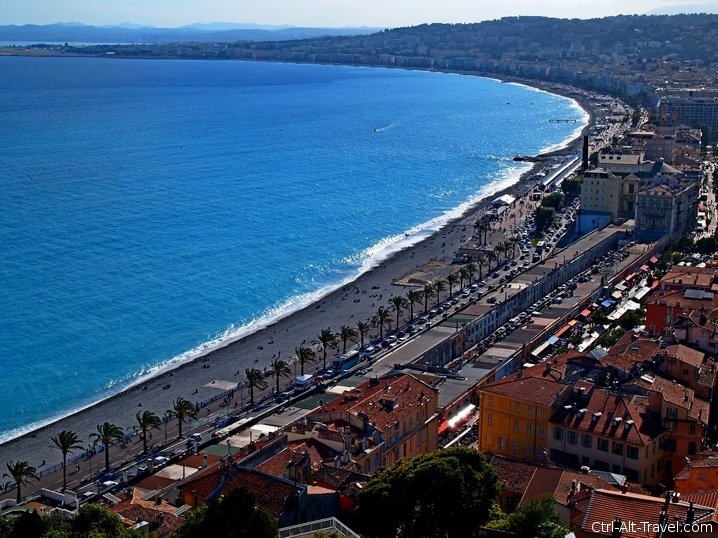 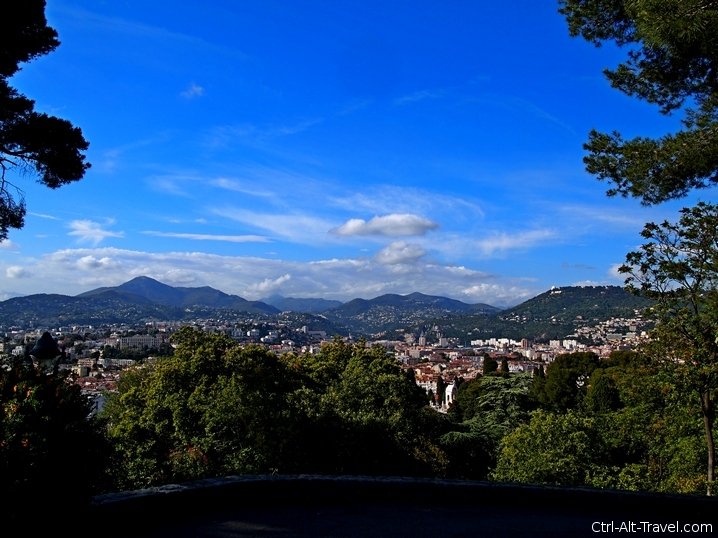 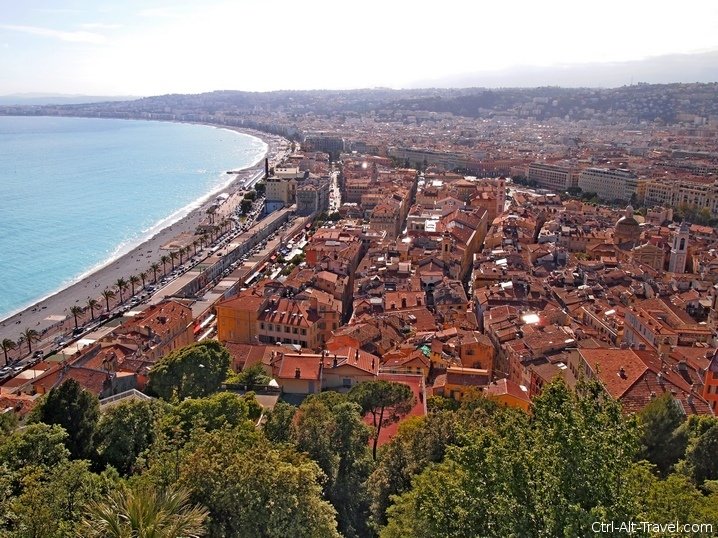 One of the most interesting sights on top of the hill itself is the waterfall. It is a man-made artifice. The water is pumped over the side of a hill with no apparent source. Ali called is a glorified fountain which is really true, but what a fountain. It was apparently built in the late 19th century where the medieval keep once stood. 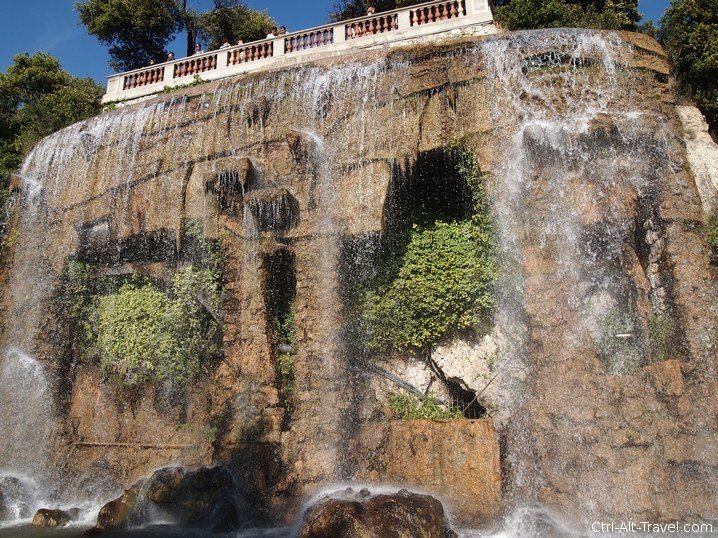 By the time we were done enjoying the waterfall it was nearing closing time for the park. We headed down below the waterfall looking for an exit. Water must drain somewhere, and they apparently channel a fair lot of it through a series of smaller waterfalls and into what looks suspiciously like a Bächle. 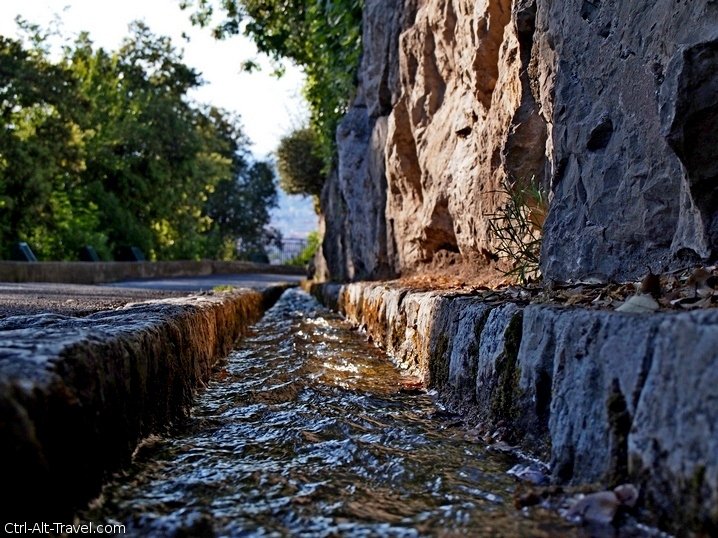 Although it is called “Castle Hill” there is nearly nothing of the castle remaining. A few walls remain standing and an occasional gate or half tower, but the castle that once loomed over this seaside town is gone. However there are signs about the park which point out pieces of the history. They are also thankfully in French AND English. Certain remnants of the castle were renovated in the late 1800s.

The hill was the original site of a Greek-Phonecian fortified town in 3rd Century BC. It became Roman in the early Christian times and a medieval city after that. The Dukes of Savoy built a citadel on top of the medieval keep from the Earls of Provence as well as the current old town in the 16th century. However French occupation in 1706 saw the castle’s forced dismantling. In the 19th century the site became a park which it still is today.*

There are several stairways from old town and a slope from the other side near Garabaldi tram stop that lead up to the top of of the hill. Near the beach end of the hill is a tower with stairs that zig-zig up the hill around it. There are some pretty spectacular views of the beach and bay from here. There is also an elevator in this tower.

Walk toward the beach and the hill from the market square in Nice and you will see the tower with Ascenseur labeled on it. This is the elevator. It is free to use both up and down. The system is fully automated with signs not to touch buttons. This is a handy way to ride up and walk down if you don’t fancy the stairs. Be aware once you are up on top there are still some stairs about to get to the various sights. 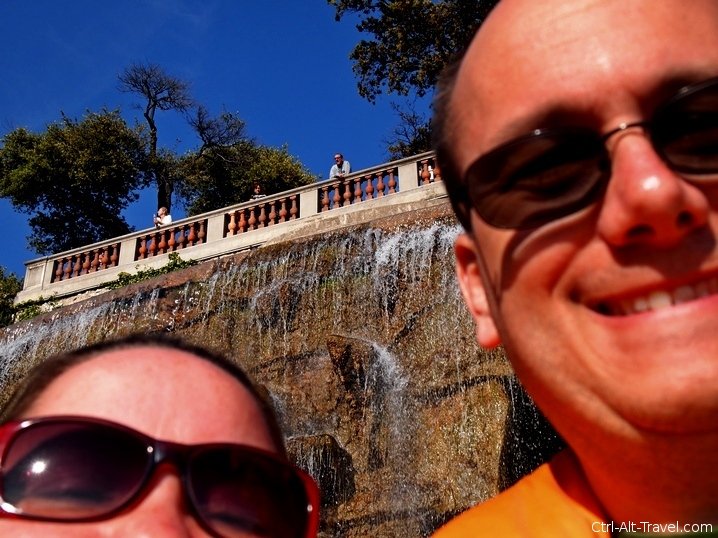 A sign mentioned park opening times as being 8am until 6pm with later in the spring and summer. We were there after the park closing time and didn’t see any gates, so I am not sure how it would be enforced.

If you are in town, check out my orientation guide to Nice.

* – The history is a paraphrasing by me of the signs posted around the park.

Interested in Nice?
Then check out these day tours (affiliate links)