Stoa of Attalos in the Athens Agora

The Agora in Athens was my favorite part of the two days that I spent in Athens. I was not overly fond of the city, but I did enjoy walkign around this set of ruins. My favorite part of the Agora was the reconstructed Stoa of Attalos. A Stoa is a ancient Greek covered, yet open sided building. These were public places for people to gather and merchants to sell their goods. I really like this idea, especially in comparison to the modern day equivalents, the mall. I liked the free air flow and although it was nice to be nearly alone the day I went, I can imagine a bustling market. 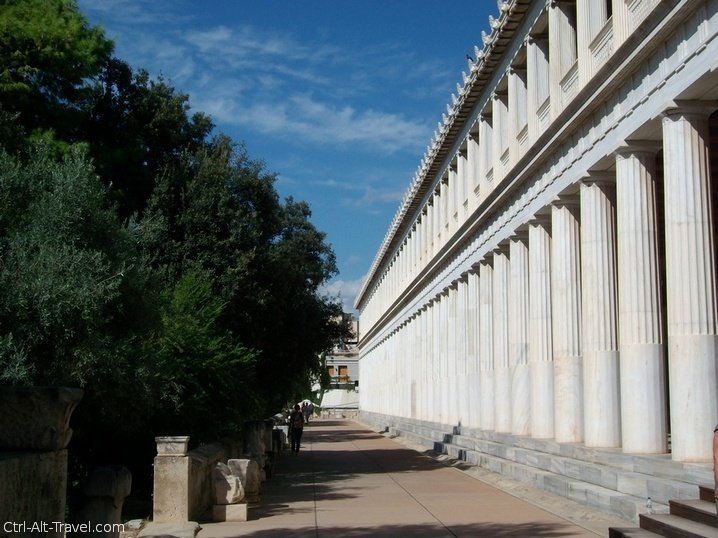 This particular Stoa, the Attalos Stoa, is a restored building on the grounds of the ancient Agora in Athens. It is the most intact of the buildings and helps make the site feel less like ruins. The building houses the Agora Museum. I am not much of a museum person. I much prefer to wander around in a place and get  a sense of it. Stuff dug up and presented in a glass box with a tidy written plaque is not as impressive to me as ruins that I can be amongst. 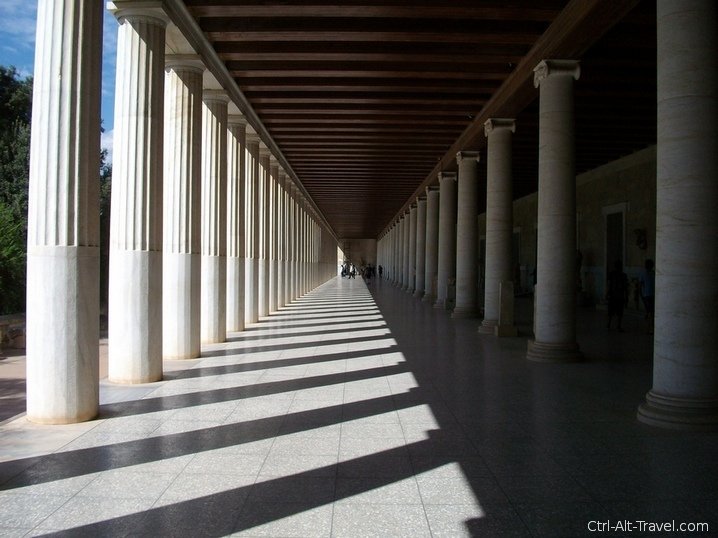 Inside, I found the play of light and shadow from the columns to be entrancing. That and the way the repetition of the pattern tricks the eyes in various ways. The sense of distance is heightened for me with the patterns. I see the size of the columns reduce and can feel somehow more how far away the other end is. This helps as I have no natural depth perception (stupid eyes).

Walking around I tried to imagine the place full of people talking and conducting business. Merge this in my mind with the chaos of a modern market and I get a kind of chaotic cool mix in my head. Although it is nicely renovated and polished, I do not get the feeling that this is a holy building. It is somehow the equivalent of a public square or even a modern mall. This was a place for commerce.

Just as I was leaving to go back to the Monastiraki station to head back to my hostel for a rest, I caught this picture from outside the Agora. The restored building in its glory and the graffiti in the bottom corner that reminds us we still live in modern era.

For more about the Agora site as a whole take a look at this in depth archeological guide of the Agora.