Mykonos was the last stop on my week long boat trip through the Cyclades. It is, like a lot of the islands in the chain, well known for being a party place. We were there a little after high season and it was still wild enough for me. I am glad we weren’t there earlier. The main town is a warren of tiny alleys that don’t run straight and seem to repeat the same stores. Corners jog around and signs point everywhere but out. I just stepped away from my friends for a bit to get a crepe and got lost for over 30 minutes. 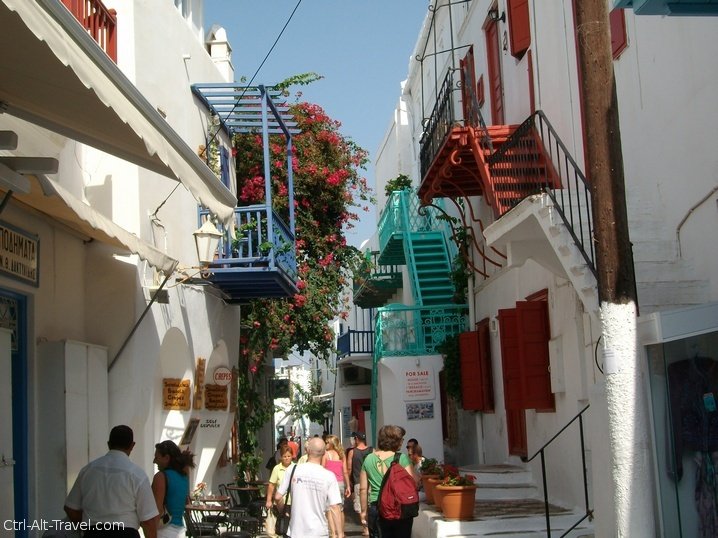 Mykonos in the day time is easier to manage. Imagine this alley at night with more(and drunk) people and stores hawking their wares at every turn. It gets confusing fast. But really, this post is not about the tiny alleys, but some of the other views that I really liked in the city. 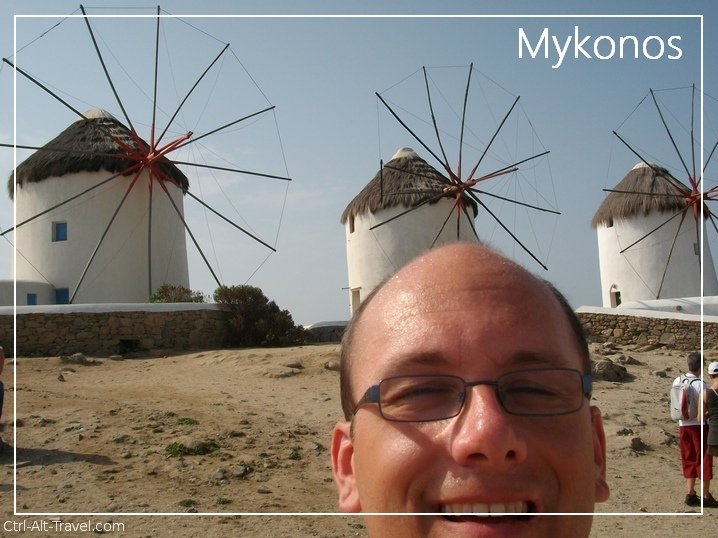 Mykonos is known for its line of windmills. Walk up the hill and there are tons of people having their friends take pictures of them in front of the famous site. Postcards show the windmills in all kinds of angles and light. This is the iconic sight of the island. This is not the iconic postcard. I am not so good at the self portraits, but you have to practice right?

I like mundane items. Doors and postboxes are my favorite. I take pictures of interesting post boxes as I travel a lot. This was a great one with the town in the background. It is unusual, especially in a town known for rowdiness to find a post box so clean with stickers. This has ended up being the iconic Mykonos picture for me. Not the windmills, the post box.

I often go looking for a cool shot. Sometimes I am too clever for my own good and sometimes it works out. I like this frame of the area of Mykonos they seem to call little Venice. Every town with even a single canal has an area they call little Venice. Though I don’t even remember seeing a canal.

In my like of mundane things like postboxes and such, things like a row of empty chairs draws my interest as well. This was in the area called little Venice (I think, I got lost in Mykonos, a lot). I was there in the early morning walking around before my ferry to Athens left, so I can well imagine this would be filled with revelers come nightfall.

This was a welcome site after wandering in the alleys for a while. Not only the open water which told me I had survived the labyrinth, but also the Mini Market. Even though we were there in September, it was still hot out. Being lost works up a thirst. Though this particular mini-market, despite his advertised selection of vices, did not have change. So would not let me buy my 1 euro juice with a 20, forcing me to seek out a different establishment. I wisely stayed along the waterfront instead of plunging back into the maze.

Mykonos is definitely a neat place to walk around, though I found the night life actually a bit TOO intense for my tastes. I would prefer to go down to Santorini.