Meteora is a group of monasteries in central Greece perched on top of mountainous spits. The Holy Monastery of Grand Meteoron is the largest of the remaining active monasteries and one of the first stops of the daytripping groups. It is a fascinating place. The day I went, the building was writhed in fog that made it feel more like a scene out of a movie or book than reality.

This building is amazing and serene and surreal all at once. The fog and the occasional chanting really made it feel like something out of a book. Especially as it got hotter later in the day and after a while all of the monasteries began to blend together, this was my favorite one. 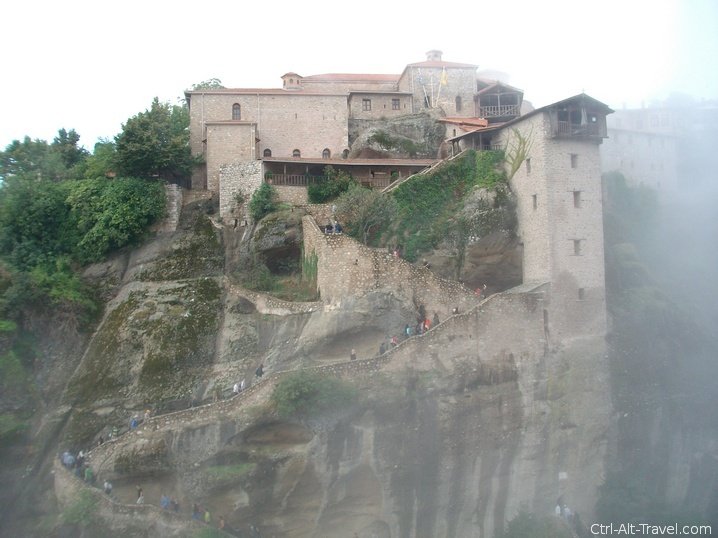 The monastery is built on top of a mountain with sheer cliffs on all sides. In order to get up to it, there are quite a few stairs. Most are carved into the side of the rock, or occasionally through it, and wind upwards at steep angles. It is not very handicap friendly from what I saw. Despite the steep climb, the views are well worth it.

Inside, my absolutely favorite part of the monastery was a mural of Jesus and several Greek philosophers and scientists each carrying a scroll. According to a sign the translations of the scrolls are famous quotes from the Greek philosophers about their ideas of God, most written centuries before Jesus.

I found this fascinating. To see scientists and their examining of the world honored in a religious place is neat. I went looking for a book or even just a postcard with the translations, but couldn’t find one. Even without it, the green balls held by the figures easily identify the figure, such as Pythagoras with the triangle. (who remembers high school geometry?)

The monasteries of Meteora are still active monasteries. So like in many churches shorts and tank tops are not allowed. Don’t worry though, there are coverings available to borrow at the door. There are also entire sections not open to the public for use solely by the monks.

One of the “advertised” features of this monastery is the ossuary, the room of bones. I have seen these kind of things all over Europe, but still find them creepy. Though if this is your kind of thing, there is a room full of skulls here.

Even with the wads of tourists wandering around, I still felt peaceful here. At one point I sat on a bench watching the fog swirl around the mountain pillars and reveal the other monastery across the way. It was a nice contemplative experience. This is in somewhat stark contrast to the row of souvenir stands near the parking lot.