On the far end of the Meteora chain of monasteries from Grand Meteoron stands the Holy Monastery of St Stephan. This one is quite a walk down the road, but worth it. The monastery stands at the edge of a cliff like all of the rest at Meteora, but unlike the rest has no steep stairs to entry, only a short bridge from the road. It is also run by a sisterhood instead of a brotherhood. 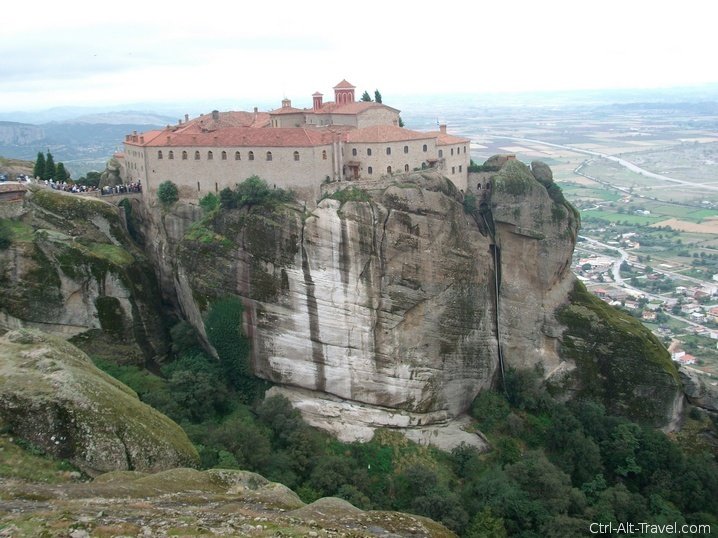 The tour buses lined the road leading up to the place, so it seems to be on the circuit. I got a number of odd looks as I walked in on my own two feet. Owing to its easy access both by stairs and road, this place felt overrun by tourists the day I was there. Including quite a few that flaunted the normal rules of covering up despite the borrowed long skirts. The entry way leads into this courtyard. I was patient enough to finally get a picture of it without people walking in front of me. 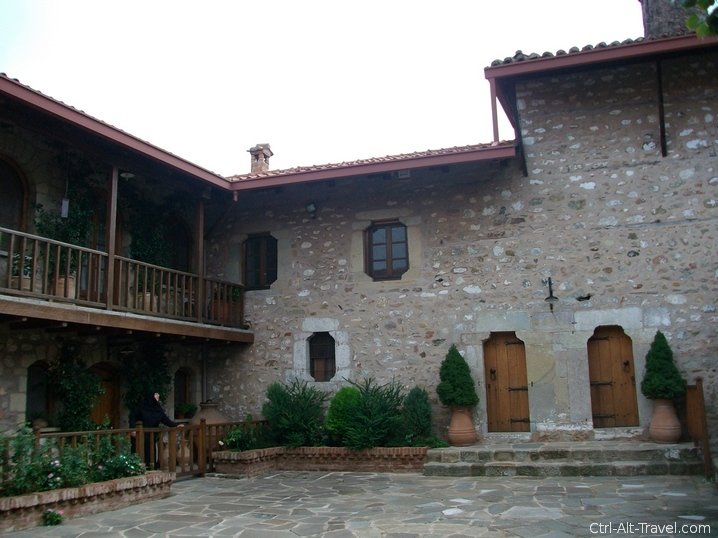 St Stephan had a green garden atmosphere. The other monasteries definitely had greenery and trees and such, but still felt like stone buildings. St Stephan, perhaps owing to its female inhabitants or perhaps to the easier access, felt more like a garden. Green things grew everywhere. This garden looked out over the valley below.

Mix of building and mountain

This next picture shows the unique mixture of the building melding with the stone of the mountain and then the flat garden around it. Such a neat place. Most of the tourists seemed more interested in waiting in line to look inside the church, so this area was more peaceful when I was there. I remember taking the picture because of the black and white cat.

Easy Entry and a Calm Feeling

St Stephan was my second favorite monastery at Meteora after Grand Meteoron. I liked the greenery and the more simple lines of the structure. The lack of steep stairs in and out was definitely a draw as well, though I balanced that out by walking out there along the road. Definitely has more of a feel of relaxation than the more meditative isolation of the other monasteries.

A thing for doors

So I have a thing for doors. This pair was in the courtyard and were pretty cool to look at. Simple fitting to the setting, but still some decoration. They look almost identical, but not quite. And with the trees flanking them, I just thought this was a cool picture. I have no idea what is behind them, but it kind of reminds me of a bathroom entrance.

This monastery like all of the others is closed one day a week and during certain hours of the day. Check before heading out that far, but it is worth it.