Kalambaka is the Greek town at the base of the mountains that form Meteora. Although most people come here solely to see the monasteries up top, I found the town very cool. It is small and yet due to the tourist draw of Meteora nearby has decent infrastructure. When I was walking around the monastery plateau, I saw the buses of day-trippers and felt sad at what they were missing in the town below. There is even a byzantine era church in Kalampaka, so it is not without sites to see as well. 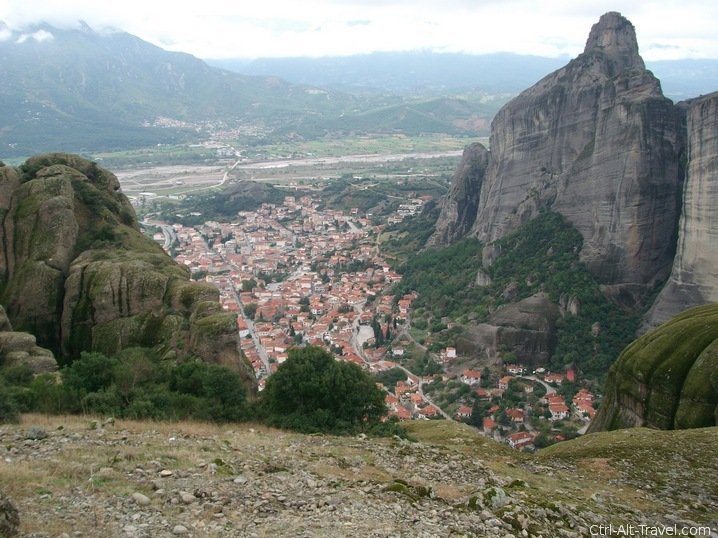 The main reason to come out here is definitely Meteora. Kalambaka serves as the main hotel area for the site. Kastraki is also nearby, but smaller. There is a train station, but when I was there the trains were not running so I took the 5 hour bus out from Athens with a change in Trikela. The bus ride was fine with a nice lunch stop, but will definitely look for the train when I make it back that way.

Not the church you are looking for

So even though I was here to see the monasteries, I got in late enough not to want to go up that evening, so I checked out what (if anything) there is to see in the town. There is a church built in the byzantine era here. So I set out to find it. I found a pretty big, but modern-ish looking church, which did not seem byzantine. I was confused until I saw this, my favorite sign of the trip, and headed up further.

Ok, this is more like it, old, dark and historical. I slipped inside to look around at the paintings on the wall and was privileged to a practice recitation of a prayer or sermon or something. I don’t know much about Greek Orthodox, but it was cool to listen to two guys recite scripture in Greek in the echoing church. Doubly neat to remember that much of it was written in Ancient Greek. It was an interesting intro for the monasteries I would see the next day.

A cool place to spend some time

Outside of the one (historical) church to see, Kalambaka is kind of just a neat little place. Hotels, cafes and restaurants crowd down the main street. A shady square with a fountain anchors the town and one turn leads toward the bus stop (it isn’t really a station, just a ticket office where the buses stop). I had some great food in a few different places here. I was there near the end of the tourist season so maybe it is hopping in the middle of the summer, but it was a nice relaxing place in comparison to Athens. Well worth a night or two, especially as that gives you more chances to see Meteora.