Meteora means roughly “above the clouds” and relates to the words meteorology and meteorite. This is such a good description of the area. The spires of rock near the town of Kalampaka once held many monasteries and havens in the caves and fissures of the rock, now only 6 buildings remain active. These orthodox monasteries perch on top of the rock cliffs and are now a major tourist destination. 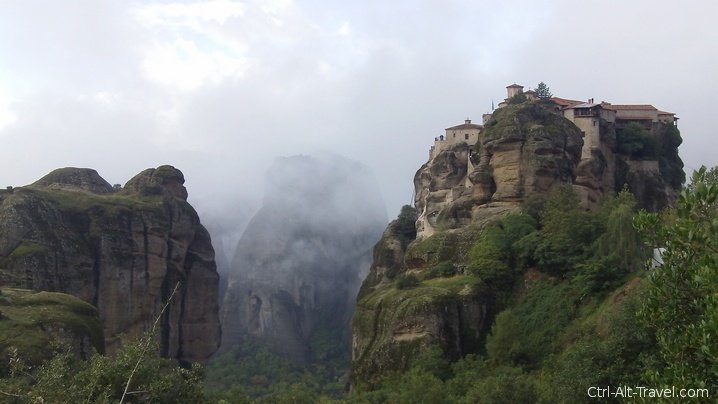 There are six monasteries of the area. Each have different opening times and days. They generally all have a several hour period around midday where they are closed, though each is slightly different. The closing days are staggered as well, so that at least a few will be open on any given day. This all means to definitely plan your visit. Each monastery charges a small fee for entrance, so don’t decide to leave your wallet in the hotel. Since they are active religious buildings, dress modestly. (Though they will lend coverups as needed). 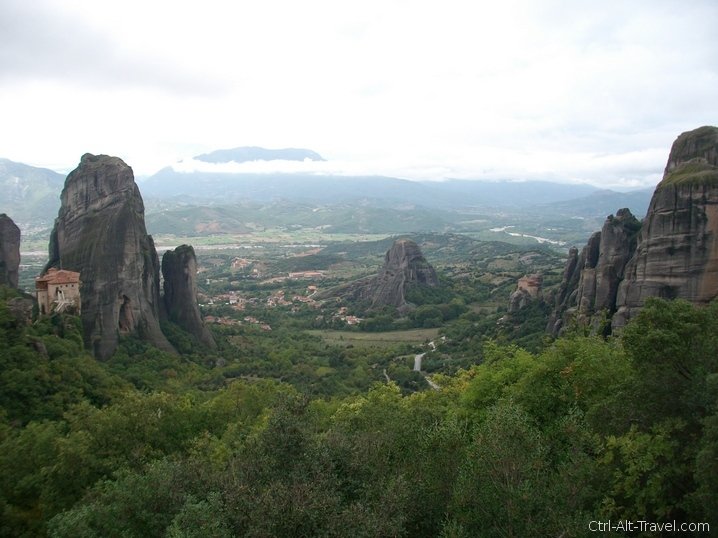 Although there are daytrips from Athens, I definitely recommend staying over night. The town of Kalampaka is nearby and is a neat place to spend a night. There are several buses a day from the main square up to the monasteries up above. Definitely double check the times. I missed the last bus of the morning by five minutes and had to take a cab, although that was much more expensive. Cabs were also in evidence around the monasteries up top, so getting one back down should be possible as well.

To get from Athens to Kalampaka there are bus links with a switch at Trikala, There is apparently also a train, although it was not running when I was there in 2010. The busride is about 5 hours but beautiful.

There is a hiking trail from the top end of Kalampaka that leads to near the entrance to the Monastery of the Holy Trinity. The main line of monasteries leads from Grand Meteoron by Varlaam then a long stretch and ending near Holy Trinity and St Stephan. The other two, St. Nikolaos Anapafsa and Rousanou, are not at the same level as the rest and down into the valley a bit further.

It is definitely possible to walk the monasteries, but be in decent shape. This is Greece and can be hot especially in the summer, so bring water. In addition to the distances between the monasteries on a naturally hilly road, there are the steep stairs to get into and out of nearly all of the monasteries owing to their rock top locations.

Although I was only there one day, I wish I had stayed another. The fog swirling around the monasteries was neat, but I would have liked to have seen them in the sun, as well as the other two that I missed. With the staggered closing days, it is unlikely to be able to hit all 6 in one day.

Highlight of Greek Mainland for me

I spent a week in the Cyclades and a week on the Greek mainland and this area was my favorite of the mainland. Meteora is definitely worth checking out. If you have to do a daytrip, go ahead. But if you can spare the time it is really worth going up for a few days and taking your time walking around the monasteries at your own pace. Not to mention Kalampaka was a pretty cool little town.

Mud Pots in Rotorua, New Zealand Of Frites and a Belgian Waffle