Meteora in central mainland Greece is made up of six active monasteries atop rock pillars. The Monastery of the Holy Trinity typifies this very well. It sits on top of its own own small spike of rock and like the rest only accessible via steep stairs carved in the rock. It was the smallest of the monasteries that I visited on my day there. 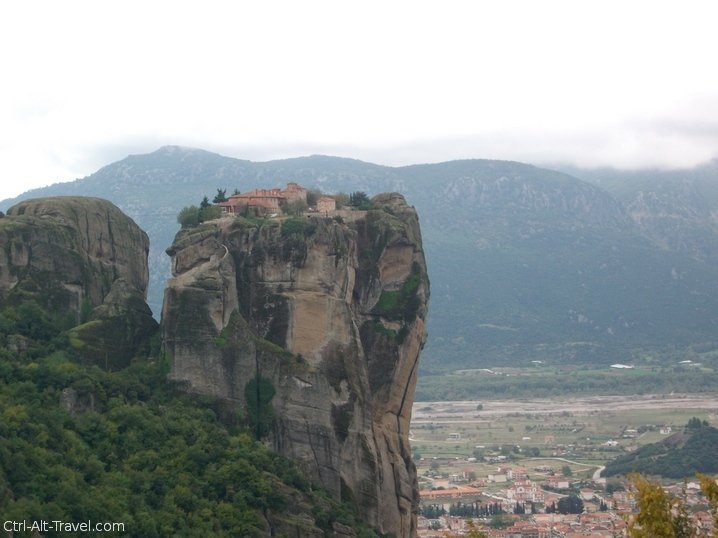 I had hit 4 of the six monasteries in Meteora in my one day there. This was the last one for me. I admit I was feeling a bit burned out. I was there on my own, so on foot. And although it is a truly beautiful walk, it is still steep in places especially the stairs. And after seeing 3 other monasteries, this one just kind of felt “same same”. 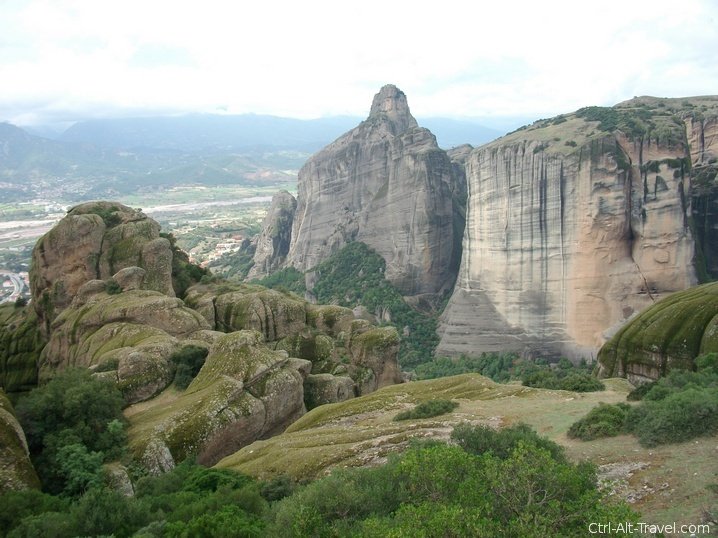 It just feels smaller and more isolated somehow. Partly the rock pillar that it stands on is a little more separated and feels taller than the surrounding pillars. Though instead of a vertical basket and rope, there is a ski lift style cable strung at the same height across to a neighboring pillar.

The stairs are quite steep and in places dug back into the rock making it seem somewhat oppressive. Partly I was tired after a long day, but it felt steeper and longer than the rest. This monastery was not the most impressive of the 4 that I got to see, and despite my sense of burnout it was still worth going to.

The monastery of the Holy Trinity is smaller than the rest that I visited. It also felt darker and more closed in. Despite this I found some good views of neighboring monasteries out the tiny window. It is still an active monastery and had the restrictions of clothing requiring long pants and sleeves. The monastery was however also under renovation. It is a little heartening to see work being done to keep the place in good repair. There was even a modern built bathroom off to the back.

After my fairly short visit in the monastery, I climbed back down and came across a sign pointing down a path to Kalampaka. This had been marked on my map by my friendly hotel guy, but I was happy to find it. This path heads down the valley back into town making the Holy Trinity monastery a good choice for either your first or last visit of the day. The path is steep enough that I was happy to have it as the last thing of the day.

The path is actually quite steep(for a path through the woods that is only barely marked and no rails or steps) in places and was blocked by goats at one point when I walked it as well. The goats stopped me for a bit, but I survived their malicious intentions.

One any one day not all of the monasteries of Meteora are open. It is good to check which is which.

Lisbon by Night Doors of Barcelona and Valencia