Everyone raves about the blue domes of Santorini. The postcards all have them. The rounded blue domes in a sea of angular white buildings clinging to a cliff. Although they are amazing and this post is not about the domes, but about the doors (only a few letters different anyway, right). I really like doors and pictures of doors. The doors in Santorini are as impressive as the domes and far more varied. 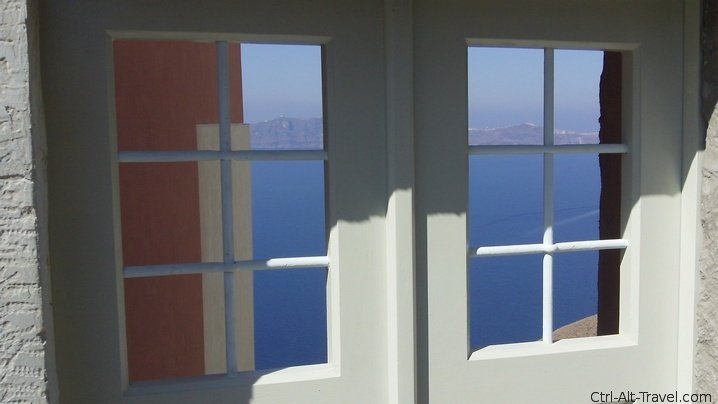 The two main towns on the island of Santorini are Fira and Oia (Ee-uh). Both of these are perched on the cliffs and drip down over the side. There are hotels and restaurants that are on the side of the cliff and are reached from stairways that go down. Doors at the top seem to lead over the edge to nowhere. Gives some great views through them though.

Dripping Over The Side 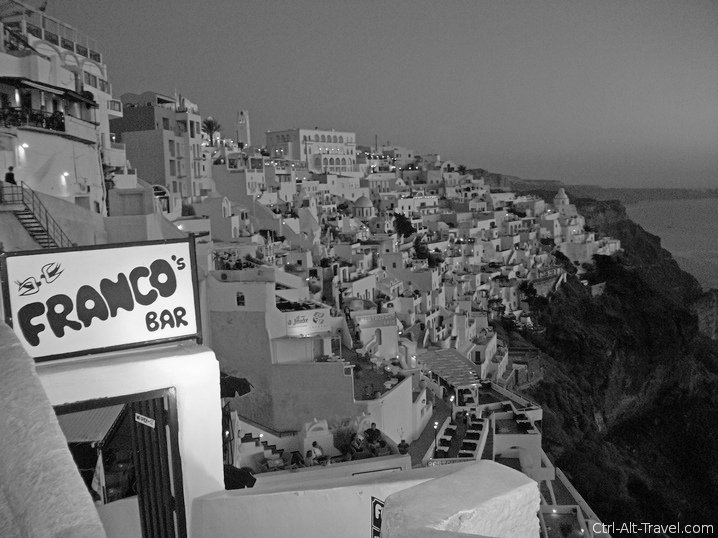 After the sun goes down the views turn inward and the clubs and bars open up. I have no clue what Franco’s Bar is or if it any good, as I didn’t venture through the door. I just enjoyed the picture down the length of Oia, showing how it cascades over the edge.

This is my favorite picture of my time on the island. The traditional colors of deep cobalt blue and pure white are there and yet it is still a mundane functional door. I like that juxtaposition of stuff. Art and mundane together. With the nearly matching color, it could almost be a door into the sky.

Door With a View

There are no bad views in these towns. Oia especially is known for its gorgeous sunsets and both towns for views of the volcano that sits in the center of the caldera that is Santorini. This particular door was in a tiny cafe that I sat in for tea. It was a very hot day so the shade was welcome despite the expensive tea. The view on the balcony was inviting with the hazy volcano in the distance.

Everywhere in Oia and Fira is evidence of the tourist culture. Restaurants and hotels over the edge taking advantage of the views. Tour agencies and souvenir stalls fight for attention on the main drags. Even the back corners have rooms for rent. The streets can be feel claustrophobic sometimes with the high walls separating the houses from the public areas, but that leaves the doors all the more in stark contrast.

The act to keep things both in and out. They offer a way to get through obstacles. A closed door is both a sense of security and a way of ignoring things. The concept of an open door is that of hope and opportunity. A door has an identity and teases that which it covers.

Doors are in the end still a mundane functional thing, and yet carry so much symbolism and meaning for us. In that way they are one of my favorite things to photograph while traveling. I look forward to doing more “doors of..” posts.

Walking the Travertines at Pamukkale Beer Break in Wanaka