Shouts in Italian, flashes of color and people moving in all direction. It could have been a car crash, but it was a Saturday morning amidst the market district in Bologna.

Near Piazza Maggiore in Bologna, several fishmongers anchor the corner of the two main streets. Fruit and vegetable stalls crowd between shops selling meat, cheese and old shopfronts with freshly made tortellini in the window. It is a rush of smells and sights to turn the head of even this non-foodie.

Pesce (pronouced pesh-e) is Italian for fish. A pescheria is a fishmonger. I have been to many markets in the world, but even now I remember the mural in this particular fishmonger in Bologna. No chucking the fish back and forth like in Seattle, but I watched a white aproned man haggle back and forth with a women laying fish on a piece of paper on his arm. Gestures and Italian flowing back and forth until she was happy with the fish selected. 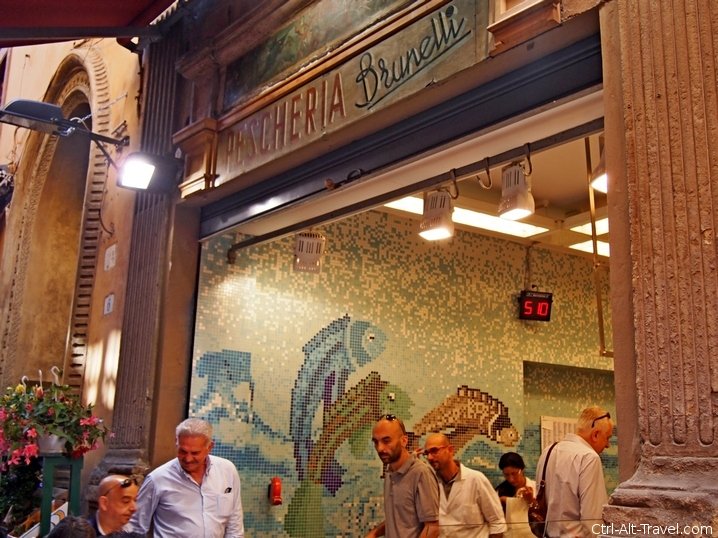 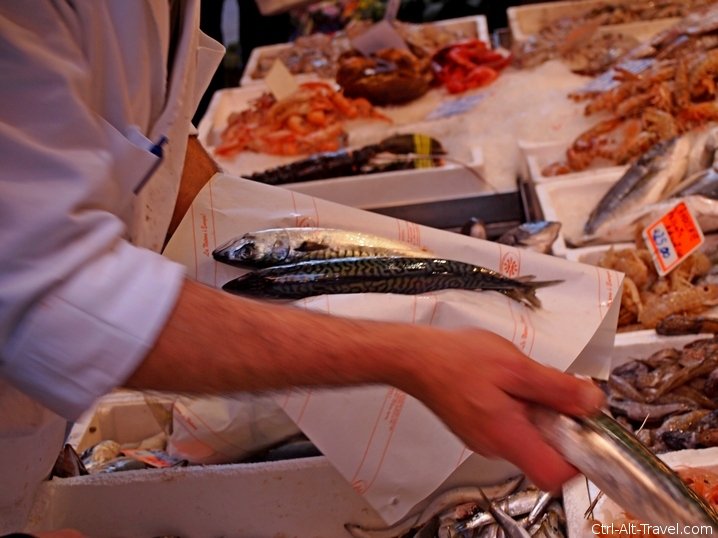 Pesche (pronounced pesk-e) is Italian for peach. I often confuse it with fish(edit: which I actually did in the post and have now fixed), but as I don’t like either I am safe avoiding both words. The fruit and veggie stands had all kinds of wonderful fruit. From the origin marks of the enormous lemons and peppers, Italian sun is very good for growing things.

The road leading from the fishmongers toward Piazza Maggiore is lined on the left with nooks which spill out every few meters in an unending display of colorful produce. The symbol above the stalls makes me think that these divisions and nooks are quite old. The road is called Via Pescherie Vecchie which translates roughly to “Road of the Old Fishmongers” in English. Whether that means these stalls all used to sell fish or something else, I don’t know.

Meat Me at the Cheese Shop

Along the streets opposite the stalls are shops selling meat and cheese. This ranges from places full to the rafters with hanging legs of ham to modern cool cases with raw offerings you make yourself. Salamis (yes plural, many types thereof) and massive mortadella are also on display. Cheese is stacked everywhere as well. One store had a great map out front showing the various foods from around Emilia-Romagna.

Italy is known as the land of pasta and this market area does not disappoint. You will be able to find the tortellini, tortelloni and tagliatelle which Bologna is known for.

The area is very bustling and definitely feels like a market even though it is only a few streets. Enough so that I saw a few tour groups following their numbered umbrellas through the district. It is also just off the main square and many of the side streets not part of the market were lined with cafes. Do not let this deter you from wandering here and lingering to do some people watching.

Getting to the market

Via Pescherie Vecchie extends from Piazza Maggiore to Via Drapperie. These seem to hold most of the stalls and shops of the area. Via Ugo Bassi 25 extends from the end of Via Drapperie back toward the piazza and has a bunch of bars and cafes for your peoplewatching and caffination needs.

Some stalls definitely had opening hours for the morning and I saw the fishmongers cleaning up around lunchtime, but I have been in the area late afternoon and plenty of places are still open and doing business, especially the shops.

Check out this write up if you want to read more about the market district and Bologna in general. There is also a covered market in Bologna as well Mercato delle Erbe (link in Italian) on Via Ugo Bassi 25, which is a couple of blocks from the main square.

We were in Bologna as a part of the Blogville project. Opinions and cheesy headlines are my own.

Nice Castle Hill : Looking Down on the Riviera From Above Pelgrim Brewery in Rotterdam