Bologna is one of the great overlooked cities in Italy in my opinion. The northern Italian city is home to the country’s oldest university. Also known as Bologna di Grassi (Bologna the fat), it is the birthplace of a lot of the food we associate with Italy. The center of Bologna, like the center of most places in Italy, is a large plaza. Here it is called Piazza Maggiore.

On one side of the piazza stands a large portico-ed building (home to Bologna Congressi) called Castle Enzo. Standing in the center you can look down passageways in all directions. Each view gives a unique vision of what Bologna is like.

First look down into the pedestrian area. This street and several like it lead away from the piazza toward the university district and hold both the market district and numerous bars. At night this area is still teeming with people seeking out their evening apertivo drinks before dinner. It is a lively section of town and still only steps from the piazza. 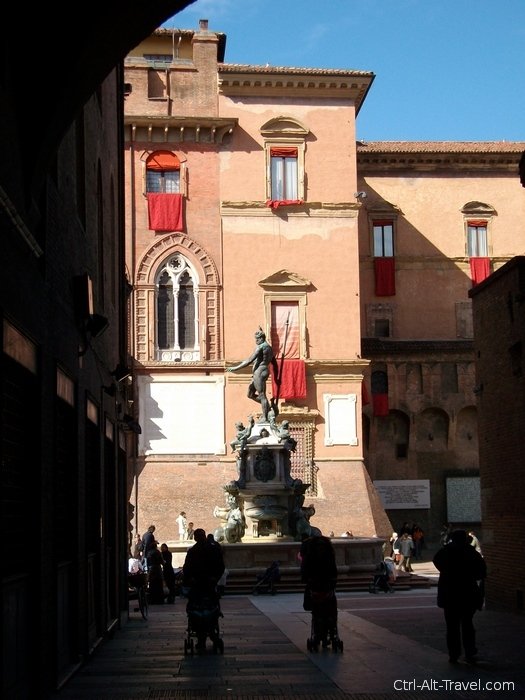 Turn your back on that for a moment and gaze upon the fountain of Neptune. While I was in Bologna to learn Italian for several weeks, the fountain became the default meeting place for friends. It stands in a small extension to the main piazza in the direction of Ugo Bassi, the main shopping street. The city library is behind the fountain and also well worth a visit. The area around the fountain is a good place to relax and people watch.

Lastly from this vantage gaze into the piazza itself. Across the vast expanse of brick is the cathedral. It is not as grand as other cities or as flashy. The angular bulk just kind of sits there.

As much as I love Italy and its architecture, I find most of their cathedrals to be kind of blah. I am partial to the Gothic spikes not the Romanesque or Baroque things that tend to in Italy. Even still, this is an imposing sight. We learned on our last trip to Bologna that this one was originally built simply as a meeting hall “a church without religion” and was later converted.

With its entrance on the Plaza Nettuno, the city library is also in this area. I would never have expected such an inside from the outside, but it was amazing. I had been wandering with a friend from my time as a student and we had just walked through a science exhibit in the Pallazo across the way and then this building. Such a beautiful place for books.

The Grand Piazza Itself

And finally enter the piazza itself. The vast flat unbroken expanse of brick that is Piazza Maggiore. Everything to see in Bologna leads off in one direction or another from this square.

The pallazo with the clock tower owns one side of the square with the congress building and the cathedral dominating two others. The last is shops and leads toward the pedestrian zone that I prefer.

Don’t overlook Bologna. It has great food, a lively university attitude and this wonderful piazza.