Naples is not on the main tourist track in Italy. Sure if you are going to Pompeii you might base yourself here, but it is does not have much else to draw you. We were even warned by quite a few people to be very careful here. It does however have 3(!) castles. We had actually a few days in Naples, trying to keep with our Slow Travel Ideals, so we picked a day to check them out. Here is how our castle hunting day went. 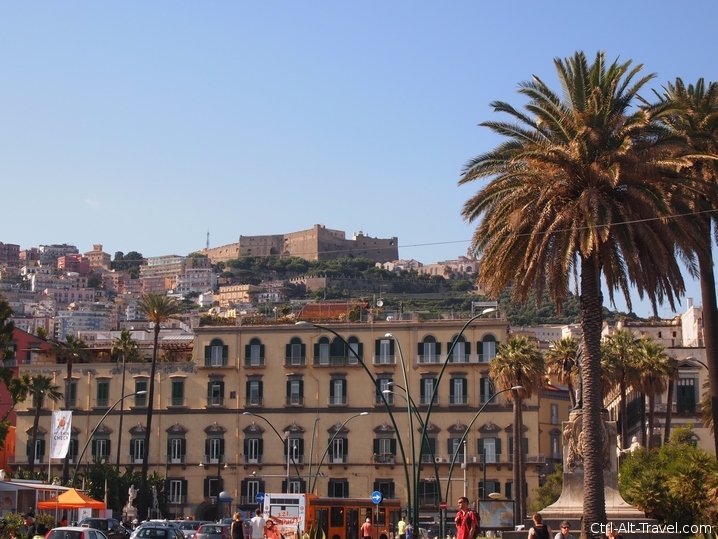 Naples is a large port city and has its own bay named after it. It was settled by the Greeks in ancient times and was ruled by a succession of kings, dukes and other royalty. It was even once ruled by the Spanish and at another time was the capitol of the kingdom which covered all of southern Italy and Sicily. This is a extremely basic and paraphrased history, but suffice to say there were reasons for castles. 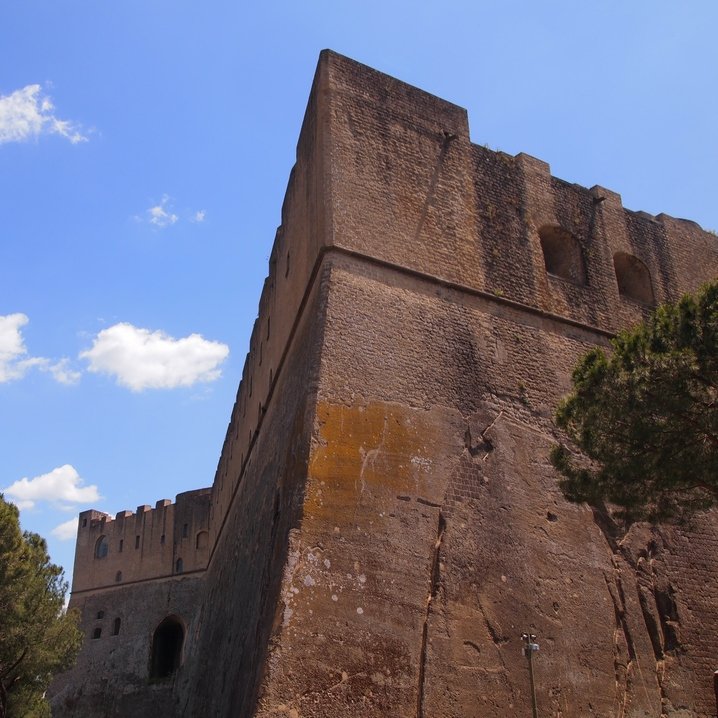 We figured starting at the top would be best, so we headed up to Sant Elmo. This is the fortification that looks down on Naples from above. There are several funicular lines which lead from various parts of the city up to the castle hill. In any case, you are walking from their terminal to the actual castle (or taking the V1 bus).

This is the youngest castle in town being built in the 14th century. We decided our day was seeing castles, not seeing IN castles, so we didn’t go in. We didn’t know it at the time, but it is apparently free after 16:00 and has a nice promenade on top. Nearby (beyond the castle gates a bit) there is a plaza with a great view of the city center and mount Vesuvius.

Practical Info about getting to Sant Elmo.

Heading down the hill and again using a funicular we ended up in the shopping street of Via Toledo not far from another castle. It is called the New Castle despite being built in 1282. There were already several in town by then.

While the top of the hill castle looked like a fortress with solid sheer walls, this felt a bit more like a castle. It had a moat-ditch and round towers at each corner. Not as “castl-y” as Gravensteen in Belgium, but still appealing.

The entrance-way was highly decorated. Between the white stone arch which is covered in statues at the entrance and the highly detailed siege and battle scenes on the bronze doors, it felt a bit more like entering a church rather than a military castle.

Practical Info about getting to the New Castle

The last of the castles is built out on the a spit of land beyond the beach. This is the oldest castle of Naples, converted into fortifications in the 12th century. Beyond the location, the interesting thing about this castle was the name. It is called Castle of the Egg.

Umm yeah, we didn’t get very close to this one. By this point of the day, we were getting tired and could not find the bus to get out to the castle directly. We got close enough for pictures, but then just decided to go home. We were on a promenade, so should have been able to get out there, but just didn’t.

More information about this castle here.

Naples – Not Quite So Welcoming

We were warned about Naples. We were told about pickpockets, garbage piles and mafia issues. I didn’t feel unsafe at all, but Naples still didn’t feel welcoming. It is definitely a city that has its own rhythm and if you can’t play with that rhythm, you are out of luck. The bus system also seems a bit haphazard. Ali wrote a nice piece about how the city struck us. In a lot of ways, we just were in the parts of town.

The castles however were interesting. I have seen fortified cities and cities guarded by castles, but this is the first city I have been in which had multiple castles. The neat thing is that they are still in pretty good repair, not in ruins. There is even apparently a 4th castle that you can’t go in and we didn’t even know about.

Based on my experiences I wouldn’t recommend you going out of your way to come to Naples, but if you happen to be here for a day definitely go check out a castle or three. I have talked to a number of people about this and have heard of plenty that love the city and talk about other parts of town that are better and more welcoming. I don’t know if there is enough to get me to go back, but it certainly is the home to a lot of people so it can’t be all bad.

Thanks to Hostelworld and La Controra Hostel Naples for hosting us for three nights in Naples. All opinions and impressions of the city are my own.

Colosseum: The Big Thing Rome from above