During our week in Minori, I got up early one morning to take pictures of the town before the people came out. So here is a look at Minori in it quietness.

Terracotta tiles often too hot to step on during the day are night cool and smooth under my feet as I pad out into the morning to take pictures. I look down on Minori beginning its day. 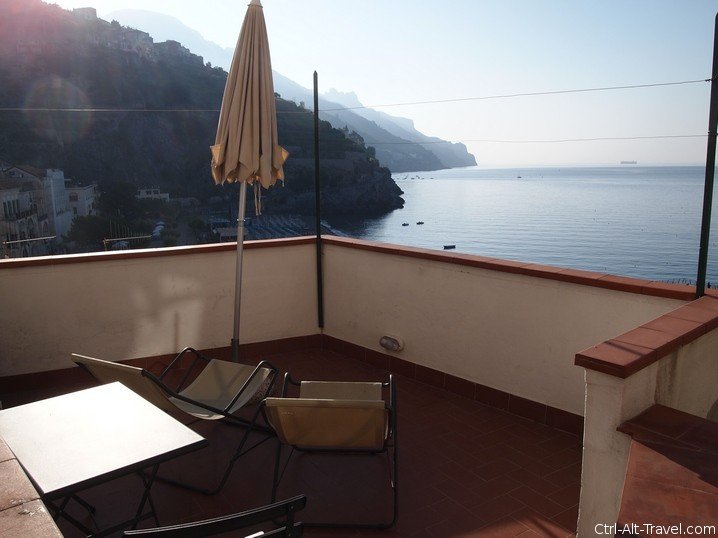 This road is the home of the Amalfitana buses as they make their windy runs along the coast from Salerno to Amalfi town. At this point of the day it is quiet, but in just a few hours there will be lines of cars honking at every turn. 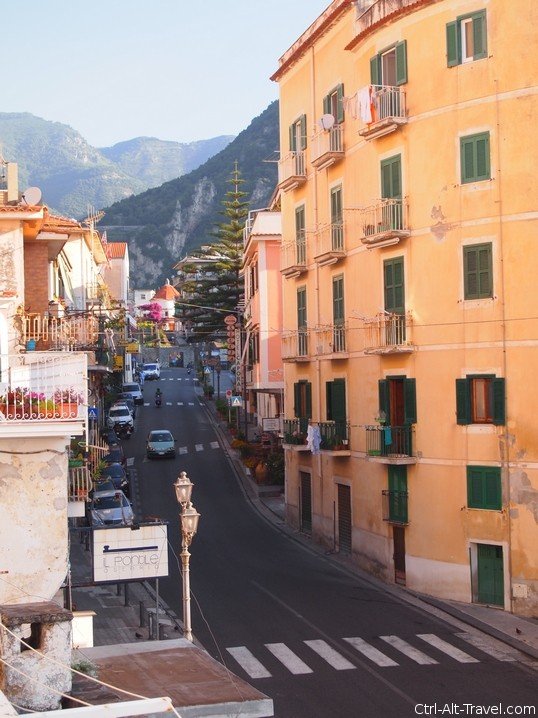 There are reminders that Italy is a Catholic country everywhere. This marble statue overlooks the parking lot from a niche.

A nice stack of blue painted poles awaits whatever it is they are used for. I saw them around town as light poles, but it seems odd to need a stockpile. The color though, especially against the whitewashed walls reminds me of Greece and especially Santorini. (Note.. there are no red poles.)

A truck for all occasions

These three wheeled trucks are common in Italy and yet we giggle every time we see one. I’ve seen them on Gianicolo Hill in Rome as well, so they are not just rural. Though they seem unstable, I expect they are easier to maneuver on the windy roads.

The pebbled beach is nearly empty before 8am. This is one of a few public areas to the beach. It isn’t solely dominated by the umbrella owners.

Minori is snuggled between two craggy mountains and laps at the Mediterranean. Ravello is perched on the mountain nearby. I had hoped to hike up to (or even down from) Ravello during our stay. (There is a path from Minori.) However, I was taken by the relaxing and decided not to.

Minori is a beach town. The best part of staying in a beach town are the waves. The sound of them and the feel of them in the air. The nearly hypnotic movement just makes me feel good to watch. I spent a while taking pictures of waves, but this is my favorite.

Minori’s beach is not very big, but it is dominated by several cafes which control a plot of land covered in umbrellas. The one we went to cost 10 Euros for two chairs and an umbrella for all day. This seems to be the main activity of the town.

We didn’t eat here. We didn’t look at the menu or really even make it down this far on our wanders for food. I just liked the look of the awning and the mountains in the background.

At the far end of the promenade from our apartment I came across this fountain. The mix of eras is somehow intriguing. The pillar looks salvaged from some ruin and while the lions do look younger, they too are nearly indistinguishable from age. Does the sea wind erode marble faster too? Oh, and almost red fish!

We heard the church bells before we even had a chance to walk in town to find the church. They even figure in Ali’s wonderful post on the bells of Minori. There is a church though, not just a bell tower. We even saw mention of the church’s presence in the Gallery of Maps in the Vatican. It has been here a while.

I always want to take a day out early for pictures when we travel. I like the air and the quiet of a place without people. Minori was the only point on this summer trip that I actually went though. Excitement, late nights and sometimes poor beds can affect my happiness to get up and go wandering. Public transport distance too. Minori though just felt right to see in the early morning light.