8 Things I Learned While Seeing Old Stuff at Pompeii

Sightseeing can be roughly divided into “seeing new stuff” and “seeing old stuff”, with the large proportion of things seeming to fall into the historical or “old stuff” category. If there was a third category of “very old stuff”, Pompeii would definitely fall into that.

I thought I knew a fair amount about Pompeii before I showed up for the tour. Nope, really what I thought I knew was is probably a single day of class in elementary school. I learned a ton going to the site. Here are a few of the things I learned and noticed while in Pompeii for a few hours that most interested me. 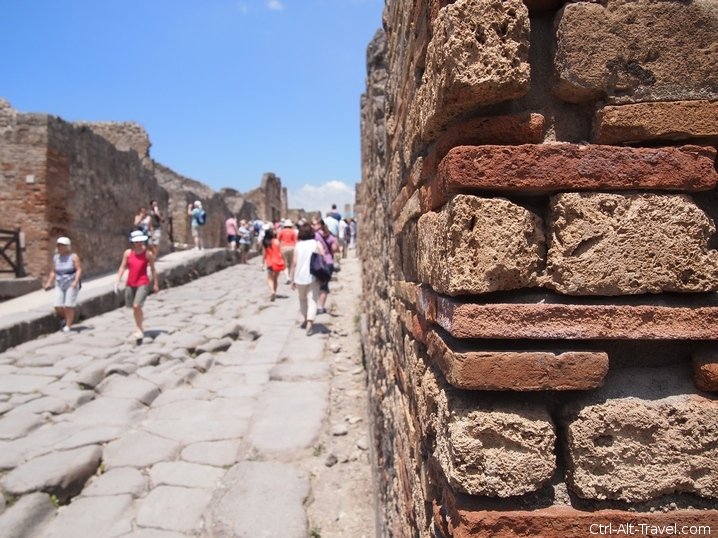 Pompeii is huge and yet still mostly intact!

An entire city covered by volcanic ash and lost for centuries is not something you see and experience in a few hours.  What makes it particularly interesting is that although it falls into the category of “very old stuff,” it is fairly intact. There are no placards describing the row of half grown over stones that once were the base of a building. It is still a ruin but most of the ground floor walls are still there and a few places have even been restored to show what they might have looked like. I am not much for museums, but this was pretty cool. 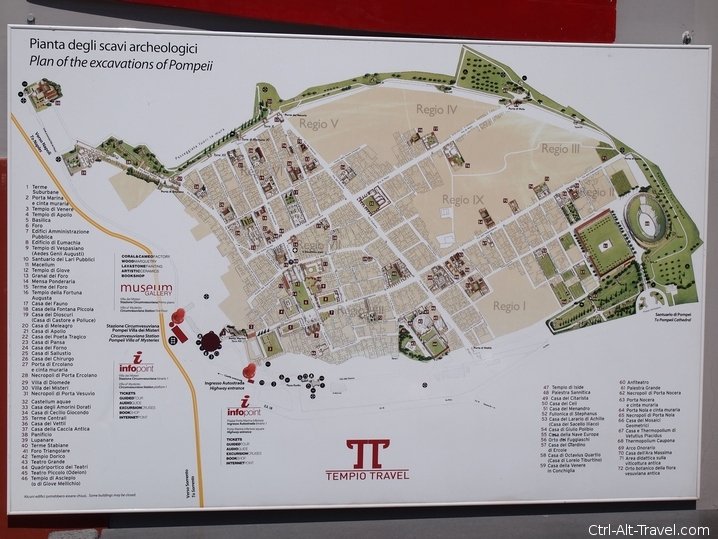 And still not entirely uncovered

Some of the major buildings and a few houses have been uncovered and partially restored. Vast areas of shops have been uncovered but left in their ruined state. There are a few areas that have been left undiscovered under the ash. This is a protective measure. Between the rain and pollution and tourism, preserving the excavated pieces of the city has taken more and more resources, so parts of the city are left undiscovered to keep them safe.

Remarkably, the plaster and paint survived in places. All around the places we walked were patches of 3inch thick plaster on the brick walls. Much of it still retained the original deep red color. It is slowly fading now as it is exposed to rain and sun, but it is amazing to see.

Even inside the large restored house were frescos which had survived with remarkable clarity. Pompeii was a colorful place.

Pompeii, being a 1st century city, wouldn’t have had much in the way of sewer and would have used animal transport a lot. This meant that the streets were probably ankle deep in shit and other waste. The civilization of Pompeii had a solution for this: shit steps (that is my name for them anyway). They were at about where you would expect for crosswalks in modern days. 3 or 4 raised steps crossed from one sidewalk to the other.

Oh yes, they had sidewalks too. The shop fronts open onto meter wide raised walks with the center of the streets being about one wagon wide. I do wonder how the wagons passed each other or if there was the concept of one way streets.

The shit steps had gaps to allow wagons to pass through. The wheels of countless wagons rubbed pretty deep ruts as they are forced between the steps. And I mean, really deep! Deep enough from the surrounding street that putting a wagon through would make it go ka-thump pretty bad. Potholes apparently were a 1st century problem too.

Our guide did point out one street that was smooth without ruts of any kind. A pedestrian street which led from the forum to the baths and brothels.

This was not something I got a chance to ask our guide, but I noticed mosaic blocks at the street corners. I expect they were a form of street signs for those that could not read.

It would have been very dark

Several buildings are restored. For the most part, this seems to mean that they have had their roofs restored. We walked through a large house (apparently one of the largest in the city) which had a central garden but otherwise nearly lightless rooms around the green space. Light would have come from the doors out into the street or from the central garden spaces for the larger houses.

Larger homes had skylights which allowed collection of rainwater in basins and fed into cisterns. Fresh water was a problem for the population.

Our guide explained that shops were recognizable by wide openings and pointed a track at the front of them which would have held sliding wooden doors. We saw a number of these with very obvious counters which had inset clay pots. These were apparently food shops which sold food and wine stored in these pots.

The main streets was lined with these sort of openings. It was interesting to recognize the commercial districts and realize that the residential was elsewhere when looking at a map. I had never had that in walking through a ruin before.

One of the buildings which was most intact was one of the bath houses. I had seen ruins of a Roman Bathhouse on the edge of the empire in Baden Baden, but to see one so intact and so close to Rome was cool. In so many ways it is just like a modern gym. Separate sections for men and for women, sauna rooms, workout areas for the men (on the grass) and even little cubby holes for lockers(!) as you did all of this naked. What surprised me was our guide telling us that this was normal bathing routine and would occur every day for most people. There was a routine which involved working out on the grass then going through cold and hot rooms with tubs. Even the slaves were allowed to use it after hours apparently.

The roof had survived and much of the place was still unrestored and yet intact. This was also where they had on display a few plaster casts made from the bodies which had been found.

The Vesuvius eruption which buried Pompeii was fairly slow and quite well documented. It apparently took 19 hours from the explosive beginning of the eruption until Pompeii was covered. It is assumed that most of the 20,000 people escaped with only 3,000 bodies so far uncovered in the excavations. The initial eruption was powerful enough to blow a chunk of the mountain off. It is now two peaks, but would have only been one in the height of Pompeii’s time.

A young man across the bay saw the eruption and wrote down descriptions of the volcano and how it erupted. An ancient blogger?

Vesuvius still looms over the site and continues to erupt occasionally, once every century or so we were told.

As I say up top, the Pompeii site is huge. Bigger than I had imagined, given the ruins we had walked through in Turkey last year. It is however fascinating to see the little details of 1st Century Roman style life in a city which was prosperous at the time. The British Museum has a pretty neat timeline on their site as well.

The site is so well known that it can be crowded. It is southern Italy so it can be hot as well. It is a really fascinating sight, but bring your patience, a hat, some water and some form of guide/map/tour.

We were guests of Walks of Italy on their Best of Pompeii Tour. All opinions and thoughts and misremembered facts are our own doing.

Pelgrim Brewery in Rotterdam Castle Gravensteen : A Castle as I Wanted It to Be