The Colosseum is not a name for a amphitheater, it kind of just means “really big thing”.

I should have realized it. I have brushed up against enough Latin in my day. I know what a Colossus is and we still use the word colossal in English today.  The official name of the building was the Amphitheater Flavian, the amphitheater of the Flavian emperors. But is known as the Colosseum (and was already known as such in Roman times) Oh, and it is colossally big. It is also fascinating in the details. 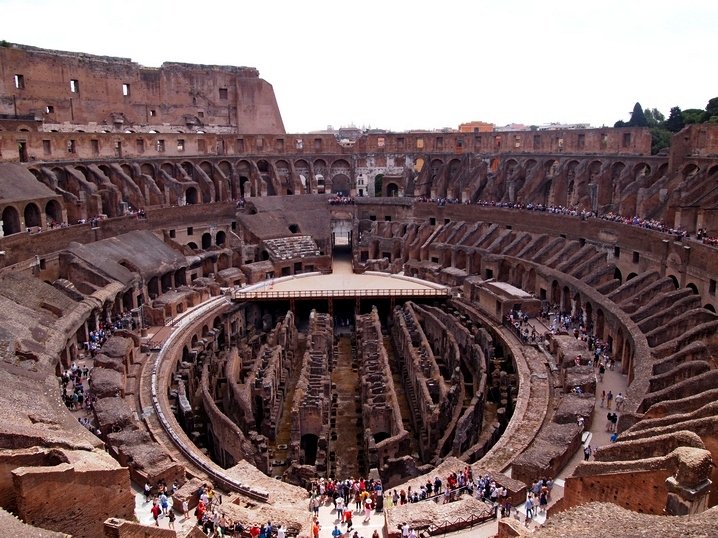 We took a tour with Walks of Italy which got us into some of the limited areas for the site which was really great. The main area where you can go by yourself or with many other tours was completely chock full of people. That gave some sort of feeling of what the Colosseum might have been like when it was running games, but was unpleasant in the tourist-hordes sense. The behind the scenes sections were time-limited, but nice to be in for a bit of personal space. We heard a ton of stories along the way.

The word Arena linguistically is related to the word for sand. So an arena would need to be covered in sand to have that name.

The Colosseum was a place of entertainment much in the way of a theater. It is most famous for gladiator fights, but they would stage reenactments of famous battles or animal hunts as well. And how boring would such a thing be in a big sandy arena without scenery? 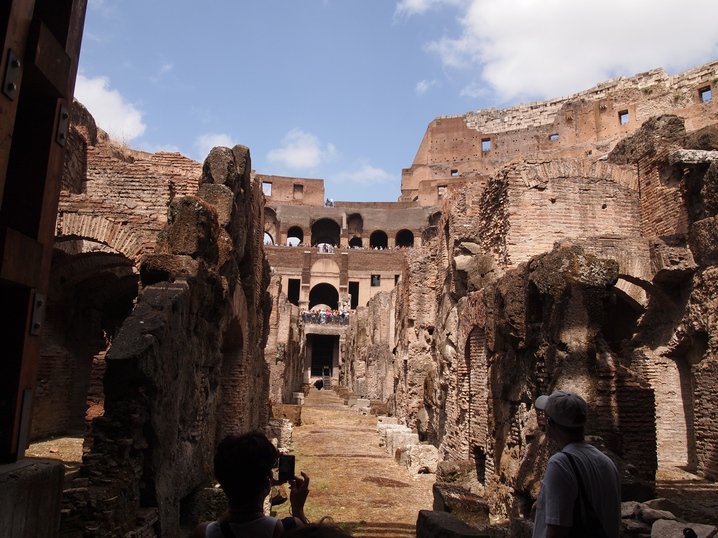 If you have seen pictures of today’s Colosseum, you would likely recognize the supports which remain in the center, though the original floor is long gone. Between the supports were ramps and trapdoors which would allow scenery, people and animals to enter or leave the arena.

The cool part on the tour wasn’t just hearing about these things, but seeing the holes for the winches that they would use to raise and lower items. However there would have been no light underneath the stage, so numbered teams would be told to pull on their assigned ropes by what amounted to stage managers. The games was a vast staged game choreographed to be entertaining.

Our guide spoke at interesting length about the gladiator schools. These men were assets and trained at great expense despite being (usually) slaves. So while the fights were bloody enough to make the peril feel real, it would have been a waste to kill too many of your gladiators. Apparently the person putting on the games would have to rent the gladiators from the schools and pay for any they did not give back (due to death).

Listening to the stories from our guide, I couldn’t help but wonder if there was such a show like Rome’s Next Top Gladiator? Or maybe that was ALL there was. Perhaps the Colosseum was just a big open-air reality show with contenders fighting to be the next big thing. In fact the more stories I heard, the more I was convinced of this.

Another set of stories that intrigued me was about tickets. Apparently, entrance to the Colosseum was free for all citizens, but you needed a ticket. The tickets were available in a lottery with higher social ranks having better chance for tickets and certainly better seats.

The Colosseum, though, is enormous (err. colossal as the name suggests). The slopes of the lower ranks is what you can currently see. There were tiers up above these. So the concept of nose-bleed seats isn’t new. (The modern world has stolen so much from the Roman times.) There were even food vendors in the circular walkways. Probably not hotdogs and definitely not popcorn.

The interesting part were the arches. Each section had a numbered arch. You went to your arch and climbed your socially appropriate number of stairs (which were increasingly steep as you went up) to get to your seat. Using these arches they could fill and empty the place very quickly. I didn’t ask, but I imagine it meant there must have been ticket guards at each arch. Today they funnel you through a small opening in the fence that surrounds the stadium and you wait in a fairly long line.

Sponsorship in the Roman Era

As mentioned, this building was made for entertainment. We heard stories of the inauguration games which lasted for 100 days when the Colosseum was completed. The games also had practical purposes.The entertainment was free to the public, but sponsored to allow important people to show their kindness and largess. The games also allowed for public executions.

Our guide talked quite a bit about the propaganda aspects of the games. That they were sponsored by prominent members of society for the good will they generated. If a wealthy businessman or senator offers several days of good entertaining games, perhaps the populace or more importantly the other influential people in town would like him better. The emperors then outdoing everyone else with their games.

So really it was similar to our modern TV. Political (and perhaps business) style messages in the form of “We thank Senator X for sponsoring the games that you are enjoying.” The risk is if you are not enjoying the games, you might not be so well disposed to the senator. We saw political advertising in Pompeii as well. Humanity hasn’t really changed have they? I wonder if they had billboard style displays in ancient Rome.

Was the Colosseum worth it?

It is the most iconic building in Rome. Anytime a sitcom sets a few episodes in Rome, they wizz the characters by the Colosseum on a Vespa to show you that. So while I did want to see it, I was a bit skeptical. Would I be ok in such a draw of the tourist hordes?

Yes, I quite enjoyed though I am quite happy we were on the tour we were on. I think the experience of the hordes would have made the place feel overwhelming and not so interesting. Hearing the stories and getting to the behind-the-scenes areas actually made it feel more interesting.

We heard stories about the bloody history parts and the centuries between now and then (it was once used as a convent!). We heard a lot about architecture, plaster, marble, concrete and how arches stay up. This post is really only a few stories.

Disclaimer: We were guests of Walks of Italy on this tour. All opinions and odd observations are my own.

And there were Waffles Castle Hunting in Naples