Rome is a city of 7 hills, a thousand piazzas and a million tourists. Historic Rome is cuddled in the bend of the Tiber river. Across the river to the south is Trastavere, which translates roughly to “across the Tiber.” In this area though there is a hill. A hill which looks over Rome. It is not unknown by tourists, but seems to have escaped being on the tour bus routes from the cruise ships. We went up one afternoon to look down on the Eternal City from above. 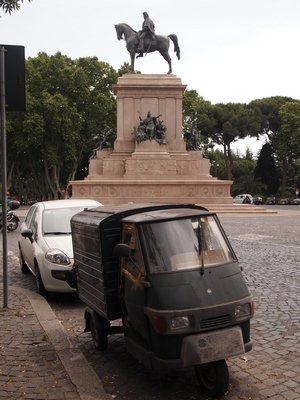 We did nearly no research before landing in Rome. I happened upon this bit in the Internet and knew I wanted to see this hill. We had had enough of tours having spent the days previous at the Vatican and the Colosseum. This seemed like a nice place to go.

The central plaza is dedicated to the unifier of Italy, Garabaldi, with a statue of him on a horse. I found a plaque while we were walking around that the hill is where he did some military maneuvers to against the French army in support of the Roman Republic who wanted to be a part of the union. The plaza is also home to several food vendors if you feel the need. We even saw one serving cocktails.

All About the View

So yeah, for most people the history is not that interesting. You come up here for the view. It is worth it too.

On the side of the hill pointed at the city across the river, the red roofs extend out and the various monuments stick up. The hazy hills in the distance as a background.

Although I always like the expansive views, when I am way up high I like to play “I can see my house from up here.” It involves, seeing what monuments or features or whatever I can recognize. On castle hill in Nice, it was easier than in red roofed Rome. I found a few that I know for sure and a few others that I guessed at. These pictures are thanks to my zoom lens.

We didn’t go, but I am pretty sure that is what the crenulated stonework is.

We had been a few days earlier to the Colosseum. I would have expected it to stick out more being how big it is, but it didn’t. We think this is the famous building.

Palatine Hill is a part of the forum and where the later emperors had their palace. I am really guessing here.

This building I know for sure. It is on plaza Venezia and seems to be visible from pretty much everywhere in Rome. We could even see it from our apartment south of town a ways. It is however not a building I had ever seen before coming to Rome. So no matter how big and recognizable it hasn’t become an icon of Rome.

The dome is the top of the Pantheon, I believe. I like the framing of the trees.

How To Get Here

Bus 115 runs from Trastavere “center” which also links to tram 8 from Plaza Venezia. It also runs down the other side of the hill, so there should be stops there as well. Bus 870 runs up toward the Vatican end of the hill. Both directions the stop with the best view is the P.le Garabaldi. It is difficult to miss. The large plaza with the big guy on a horse statue. The stops for each direction are after the bus goes through the plaza, so you know easily.