During our few days in Luxembourg, we wanted to see something more than just Luxembourg City. I had been to Vianden years past which is pretty much how I knew about it. Vianden is a small town in the north of Luxembourg almost on the German border with a castle that perches on top of a hill and protects its little river hamlet. 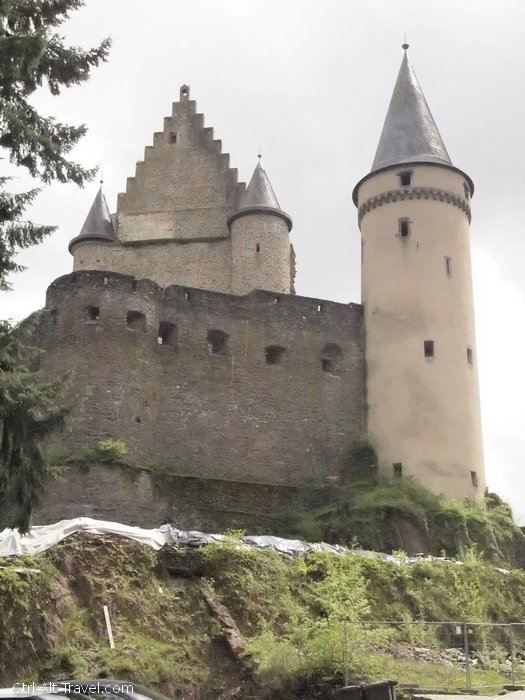 Vianden has apparently the only chairlift in Luxembourg according to the brochures. The lift starts on the far side of the river up from the bridge from the tourist board and bus-stop and goes to a hill overlooking the castle from on high. 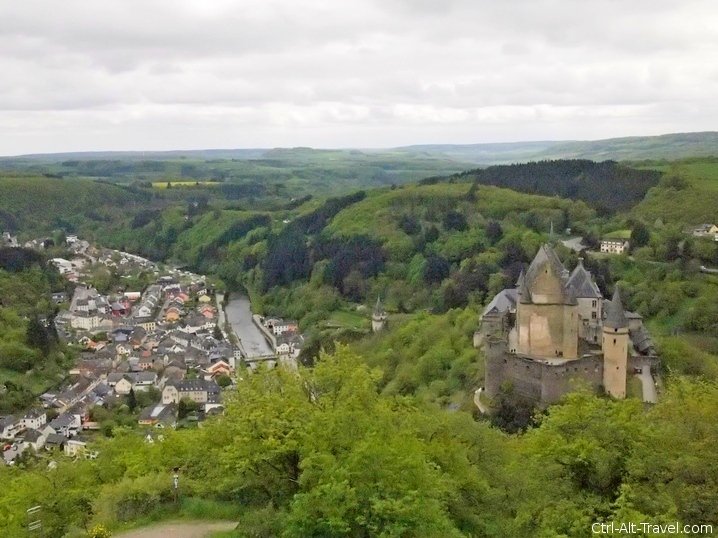 I am a bit frightened of flight. I don’t like airplanes. Although I am not necessarily afraid of heights, if I feel like I am unsupported too far off the ground I get nervous, so I was a bit worried about the trip. It was completely fun though, a bit like the balloons in Cappadocia. You are not really that far off the ground. But it is a chairlift not a cable car, so no enclosed cabin. Don’t drop anything.

The views as you cross the river and as you head up are worth it. And the views of the castle looking down from above are amazing too.

From the top of the chairlift there are signs down a path which switchbacks through a forest down to the road into the castle. If you are going to both, definitely think about taking the chairlift up and walking down.

The chairlift is neat, but the real attraction of Vianden is its castle. Vianden castle perches on a very defensive (read steep) hill overlooking the town and river below. It is quite dramatic.

Some form of fortification has been here since the roman times (450AD) and like most things that have survived that long, it has been built and rebuilt several times. The current building is a 1980s reconstruction of what it looked like in 1870s.

The inside of Vianden castle is a museum. The bottom level is archeology and armor. One room they have dug out and show models and drawings of the various stages over the centuries against a backdrop of the excavated walls from those timeperiods. Upstairs is more about the history of the place and the house of Vianden with its geneology and several restored rooms. The attic has a pair of rooms honoring the work put into the restoring the castle. (Michael Turtle has a post here with better pictures of the inside than I have.)

I quite enjoyed the armor and the models both downstairs and up in the restoration display. It is interesting to see how the site developed and to realize just because we see it in a specific form now, it wasn’t always like that.

It is worth a few hours to walk around. There are not a lot of plaques to read on the walls. The tiny map we got talks about a guide you can purchase, so perhaps more info is in that. We just enjoyed wandering through the old stuff and enjoying being in a castle.

We bought a day ticket in Luxembourg station that covered both of us on the entire network of trains and buses in the country. So getting out there is cheap.

You need to take the train from Luxembourg City to Ettelbruck and switch to bus 570 out to Vianden. Ask the ticket/help desk for the timetable to Vianden, it lists all of the connections and what days they run. During the week it looks like linkages run every half an hour and take about an hour from Luxembourg City to Vianden. Don’t get off at the Gare station in Vianden, there is one beyond that right in front of the tourist information at the river bridge.

Vianden with its castle and chairlift make an excellent daytrip from Luxembourg City. Even stopping in Ettelbruck for a bit on the way home, it was a half day for us. There is also a Victor Hugo display and plenty of walking trails around if you want to make it a longer stay. The old city walls are also still partially there and can be explored according to a map of town I saw.

Check out more photos on our Facebook Page in the Vianden Album.