When you think of the Netherlands, what images come into your mind? Is one of those images of tulips? Rows and rows of brightly colored flowers in wide fields under the watchful eye of a windmill? Well tulips are very related to the image of the Netherlands, so it makes sense. That is what is in our mind too and we went searching for it. 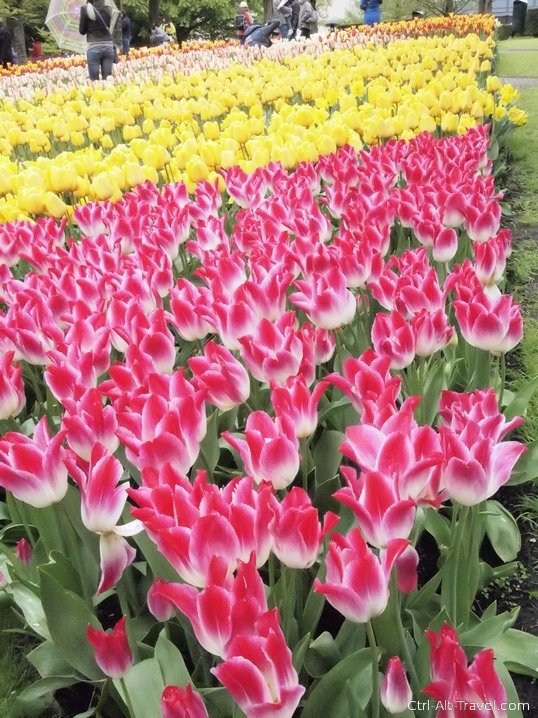 We were lucky enough to be in town during Tulip Season and went out to check out the park. Keukenhof is one of the largest farms in the Netherlands and pretty much the best well known. It helps that it is within an hour of Amsterdam.

Beautiful, but not what I expected 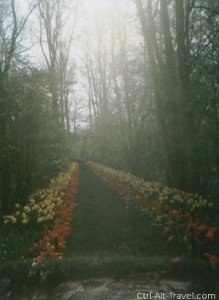 I have been to a tulip farm before, though tt has been nearly forever. I came with a school group in 1995 and we stopped on our way into Amsterdam. I have a very hazy remembrance of rows of flowers in an open field in the fog. So many of the postcards show these same fields of millions of flowers waving in their multi-colored rows.

So when we get to Keukenhof and start walking around, I was a bit confused. The park is more of a garden show and presentation of flowers than just a farm. It almost feels like a theme park for tulips. Not in the cheesy kitschy sense, but in the manicured lawns and deliberately put together displays.

That said, it was still a fun experience. I have still never seen so many flowers together in a place.

Up close with Tulips

The main part of the park is a network of paved pathways amidst and around beds of flowers. Each bed has a mix of flowers presented with little plaques giving the name of the flower in that row. And in that effect, a lot of the beds, especially near the main entrance, are in rows of flowers giving that effect of the bands of color.

The clear benefit of having the flowers in beds along the walkway instead of in massive fields is that you can get up pretty close. I am still experimenting and learning my camera settings. Trying to move beyond auto. So this was good practice.

In addition to the beds and walkways, there are a few pavilions scattered around. Each with its own theme and some with shops and cafes. The large pavilion we actually went into was displaying lilies. I know very little about flowers, but it was still fun to see all the different colors of lilies displayed in big columns. It was also nice getting out of the cold and into a warm very fragrant pavilion.

Despite the tulips being the center of the park, there are certainly other types of flowers mixed into some of the beds outside of the pavilions as well. Anyway tulips are far more widely varied in shape and size and color than I had imagined.

Think back to that mental image at the beginning of the post. The waving fields of tulip rows under the watchful eye of a windmill. Yeah, that actually exists here too.

At the far end of the park from the main entrance, there is a windmill in a little square of food carts. The carts smelled wonderful especially from the heights of the windmill as the scents wafted upwards.

The windmill does turn, but its guts have been replaced by stairs appropriate for tourists. So in one sense it is still a working windmill, in that it still spins. However it is not a working windmill in the sense that it does not appear to be doing any real work. It does however lend a nice perspective over the fields.

Beyond the windmills in the far reaches of Keukenhof are the fields. We were there near the end of the season, so most of the field was the brown of tilled soil. A few colored rows had not yet been picked and a few more have been picked but not yet tilled under.

I can imagine if you get there in the right time, the fields are just bursting in postcard worthy color stripes.

Keukenhof is centered around flowers, namely tulips. Tulips which have a natural rhythm, growing season and time in which they bloom. So the season to visit and enjoy the tulips is accordingly brief. We came in 2013 only a week before the end of the season.

“Thankfully” the past winter had been cold and long, which meant the blooming of the tulips had been delayed. As we were walking around the beds, almost everything looked to be in the prime of their bloom. Only a few flower heads had started to droop and I even saw a few patches that had not even opened yet. So from a garden presentation point of view, we hit an ideal Sunday to go.

We had a combi-ticket. For 27.50 Euros we got transport from the center of Amsterdam out to the park and back and entrance. Bus 197 leaves from Leidseplein in the center of Amsterdam and requires you to switch to bus 858 at the airport. The switch there is a little odd. At least for us, the Keukenhof bus was around the end of the Plaza building and about a 5 minute walk. We were able to buy this ticket at the Tourism Office across from the main station.

I saw a couple of advertisements for tours out to the gardens. The public transport option to Keukenhof we took was really easy and flexible, so there really should be no reason to need to spend more.