It is easy to find the list of big sites in Amsterdam. If museums are your thing, you’ll have more than enough to see. If you are not interested in the “coffeeshops” and have seen all the museums you want, what next? This list is about going beyond the big sights and exploring the city itself.

We spent 5 days in our last trip to Amsterdam. The city felt alive and full of activity. We really had not much interest in the big sites or the pot scene, so we just explored the city. Getting into our slow travel groove and enjoying a place. 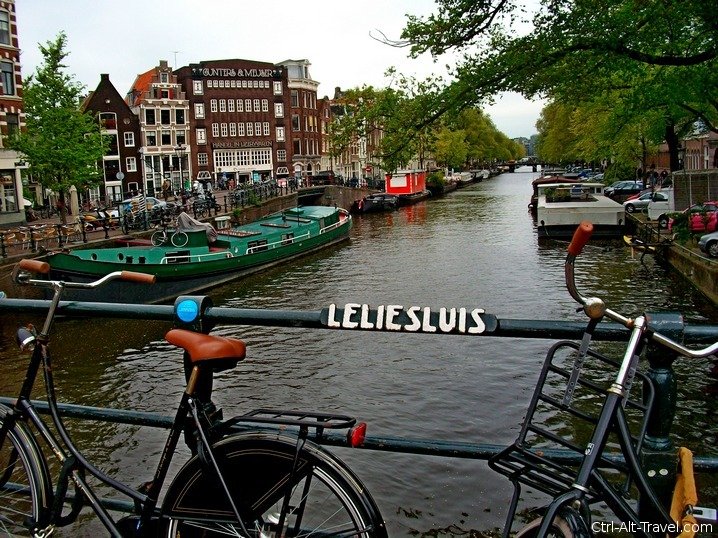 Get a transport pass

The GVB office is right across the plaza from the main station next to the tourist office. A 24 hour ticket is 7.50€, but a 5 day (120 hours) ticket is 26€. It is nice that it is based on hours not midnight to midnight days.They had up to 7 days on offer, so pick the one that fits your time scale. For comparison, a single hour ticket costs 2.80€

By having a transport pass you can get on and off the trams as often as you like without worrying about the cost. I like the flexibility as well as the assurance that if I make a mistake and get on the wrong tram I am not paying more. Amsterdam has a scan-in /scan-out system with your magnetic card as you get on and off trams, so remember to swipe your card on the reader and to keep the card from getting crumpled.

Check out 9292.nl for a site that helps you plan your journey across all of Holland.

Head to a money changer to break down big bills

We wandered into a bank to get change for the 100Euro notes I had been carrying around because the ATM had spit them out at me. We were informed that “for security reasons” the banks had no money. We were in shock.

Ok, so this translates apparently to “banks do not carry cash outside of ATMs”, so if you do need to get change for your big bills head to a money changer. The one we went into did not charge to break down my euros into smaller euros. 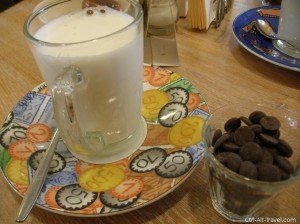 Bagels and Beans is a chain of coffee and bagel places across the country with plenty in Amsterdam. We went to two different shops and both had free wi-fi. Each table had a little bowl of candies next to the sugar cubes.

For €2.75 they have hot chocolate in either milk of dark chocolate flavors that comes as a glass of hot milk and a glass of chocolate chips to melt in it yourself. These were good places to take a break from the hectic pace of the city.

Hit up the street markets

If you are looking for some cheap eats and/or like street food, check out Amsterdam’s street markets. Albert Cuyp Market is the biggest and most well known of the markets and is not far from the center in the Pijp district. Head there for street food ranging from pancakes to chicken to Vietnamese rolls.

Check out my entire post on the street markets of Amsterdam looking both the Albert Cuyp and the Ten Katestraat Market near our apartment.

Take a break in the cafe on top of the Library

Between the main station and the NEMO building is the public library. On top of the library is a buffet style cafe with a ton of seats and a balcony for views over the city center. Apparently wi-fi is only free for members of the library, but it was still a nice place to sit for a while. We only had drinks, but the food looked reasonably priced. Though keep your change for the 20cent bathroom charge.

Thanks to Theresa for the suggestion to seek this out.

Artis Royal Zoo is the oldest zoo in the Netherlands, founded in 1838. It is certainly a “big sight”, but may not be on many foreign tourists radar. The zoo is full of animals both exotic and more familiar and a great place to wander, especially with children.

Check out my entire post on the Artis Royal Zoo for more information.

A place we would only have found with the help of our friend Yvette who lives in Amsterdam. It is in a side building of a windmill out beyond the zoo a bit. The name translates as the brewery of the egg and is a play on the fact that the water in Amsterdam harbor is also called the IJ (egg). All of the beers on offer are also named related to eggs.

As it is a brewery, not a restaurant, the food options are limited to some tasty sheep cheese and some salami plates. The brewery also has a rousing last call at 8pm, so plan yourself some dinner elsewhere (but stay for last call just to experience it). Check out the Brouwerij t’IJ Website for more info.

Gollem – for some Belgian Beer goodness

Another tip from a fellow blogger, Gollem is a group of Belgian Beer Pubs in the city. The one we went to on Overtoom street (Tram 1) has food as well. The night we were in there around 9pm it was already standing room only. The range of beers on tap and in bottles was VERY extensive.

The beers feel unique and strange as well. The picture is of the Kwak that I ordered. It came in a beaker-like glass and wooden handle.

There is a ferry terminal on the back side of the Amsterdam Central Station. We wandered out as I had read that our transport passes worked on the boats as well. There were several ferries which take commuters to the other side of the IJ and back. Not the most exciting thing you could do, but it was interesting to see the locals with their bikes.

Do you have other tips? Share them in the comments below.

Also check out the Amsterdam category here at Ctrl-Alt-Travel for more in depth posts about the place.

Street Markets in Amsterdam Behind the Scenes at Rotterdam Zoo