Home » Europe » Netherlands » Rotterdam » Behind the Scenes at Rotterdam Zoo

We were in Rotterdam as a part of the TBU Europe conference and participated in a 2 day after-trip in Rotterdam. The first stop was Rotterdam Zoo. I loved walking around Artis in Amsterdam, so I was looking forward to this. As it was a press trip, we got to do some behind the scenes looks in the Oceanarium and new Amazonia Butterfly Pavilion but not a full walk-through of the park.

Polar Bears and a Cautionary Tale

The first area we went to was the polar bear environment. They have a mated pair and temporarily Vicks, their “teenage” cub. The cub is as big as his parents and yet still milky white while his parents both are darker. I was happy to have my zoom lens in this spot to see him in the back. 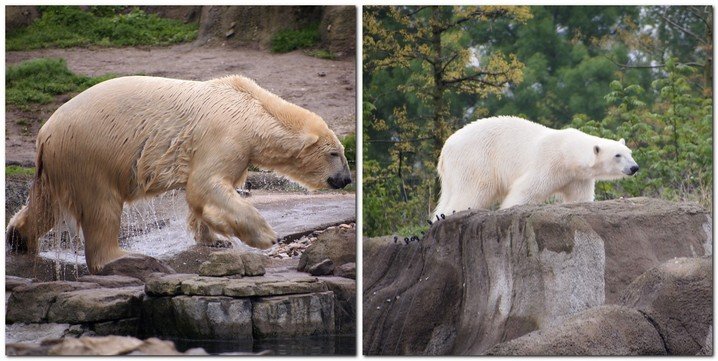 In addition to watching the bears do their thing outside, there is an indoor part to their section with a gallery to watch them underwater. Also in the indoor section, the zoo uses the interest in polar bears to look at global warming. The bears are more affected than we are, so it makes an interesting (and hopefully affecting) presentation.

Leaving the bear area, I saw a little glass area with lemmings. It was a holiday, so there were too many people to get close enough to get a picture of a lemming itself. It was interesting to hear the other people talking about Lemmings the game. Ahh, like in Artis media affects our vision of animals heavily.

The large Oceanarium was our next stop. The entrance area has seals and some aquatic birds and then leads into a darkened room with glass bubbles looking onto different environments. The highlight of Oceanarium is the walk-through tunnel. As normal for this kind of exhibit, the animals are protected from the humans by a large glass tube. The fish, sharks, turtles and rays swim above and beside the tunnel as they want. It is a neat view, but (as I learned) does not lend itself well to taking photographs. At least I didn’t get many good ones. If you like fish, this was a pretty good experience. 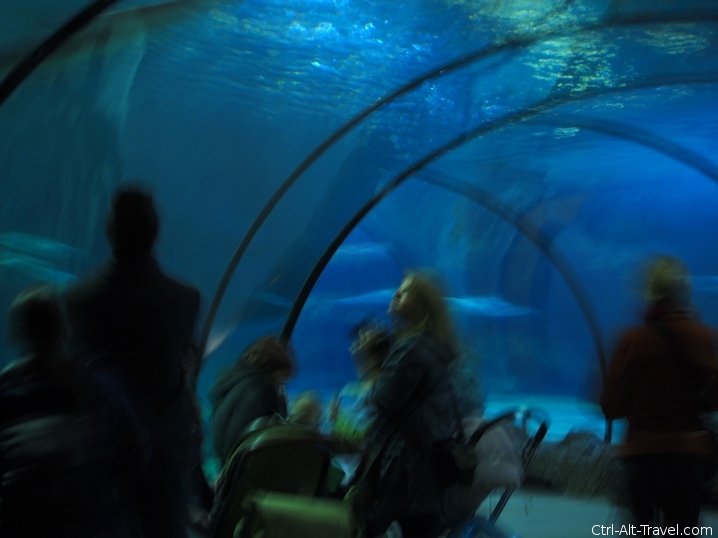 Then we got to do a bit of a behind the scenes look. We got to walk through the staff-only area to see class rooms with an enormous stuffed manta ray and shark. Laboratories where coral is put together for the displays. We ended up above the massive tanks that we saw from below to watch the fish being fed by a diver.

Our guide talked a little about the massive filtration system. The ocenarium have 7 million Liters of water which is filtered and pumped about the building. I found it interesting that they get their seawater from cargo ships, which apparently use pure seawater for ballast. The zoo has a contract to take the water when they are done with it. There is also a hierarchy of water cleanliness as well. With the more sensitive fish getting the cleanest water and the sea lions (used to being on the coast) getting the used water. It was interesting to see all that goes into the system and presenting the fish to visitors.

The next stop after the Oceanarium was the new Amazonian Pavilion. The building is complete and visitable as we went in May of 2013, but it doesn’t feel quite finished. A few ponds feel empty of fish for example. The pavilion is also billed as a butterfly experience. And while I did see a number of butterflies, the number of different types I saw didn’t seem as varied as I had expected.

Although every pond wasn’t full of animals, there were several. Near the entrance was a display of a massive water lily and how it supports the weight it can. Out guide mentioned that it will hold up babies. That will be an interesting thing if the pond below has piranha. Another tank had a group of underwater turtles swimming around.

Our behind-the-scenes part of the visit involved talking to one of the breeders at the exhibit. The zoo gets regular shipments of pupae from Costa Rica shipped to them in boxes. The pupae then are then matured in a protected environment and the butterflies released into the large open dome where visitors can see them.

We did not have much time at the zoo as a part of the visit. We only saw a few pavilions. Which, given the blustery weather, was ok on the day. Though now as I skim their website (which unfortunately seems to be lacking a map online of the park) they appear to have a lot of animals we didn’t see. There are mentions of giraffes, tigers and rhinos. The mascot of the zoo is Oli the Elephant, so I have to assume they have elephants as well. Oli’s image shows up across the park and even as round grayish cake pops with eyes at the restaurant.

The visit was not very long, nor from a visitor’s perspective very extensive, but I did enjoy the time in the zoo. We only got to see a few spots not the entire place. From the maps I saw, the zoo seems pretty big. The Oceanarium was neat to walk through and once they get closer to their plan on Amazonia, it should be quite neat as well. If you have time in Rotterdam, especially with kids it is worth an afternoon.

Adult Tickets run 21Euros and kids under 12 16.Euro with a 2Euro discount for buying online which is not much different than Artis, especially if it includes a map. Check out more info on their website, including how to get there on public transport.

We were the guest of Rotterdam Tourism at the zoo. All opinions and quirky observations are mine alone. Weather and shaky pictures are no one’s fault.