How does the image of a straightlaced Pilgrim fit with the only brewery in the Dutch city of Rotterdam?

Well, the Pilgrims who landed on Plymouth rock in the America’s apparently came through Rotterdam before heading across the waves to the new world. There is a church honoring the Pilgrim Fathers in the Historic Delfshaven area of Rotterdam and it lends its name to the Pelgrim City Brewery next door.

We went twice while we were in Rotterdam. Once with our tour for a beer tasting and again on our own for lunch. 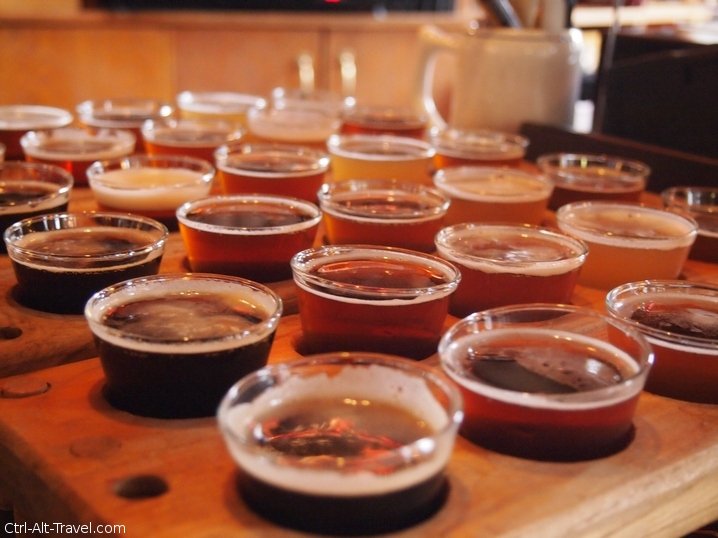 History and Aim of the Pelgrim Brewery

The brewery has been the only city brewery in Rotterdam since 1995. The building in the historic Delfshaven part of Rotterdam was once the town hall of the area and has several rooms dedicated to the brewing of beer and a restaurant all on the ground floor with seats out by the canal.

Eric showed us around his domain as the brewer at de Pelgrim for the past 10 months. On our short tour, he explained the beer making process and showed us around the several rooms dedicated to beer. The front room is warmly decorated in wood and displayed the massive copper kettles which are used for the heated steps of making beer.

Through a door we went into a more modern feeling room full of metal tanks and hoses. He pointed out a few that were full of beer waiting to be finished and the hand bottling machine.  He mentioned that each batch takes 4-5weeks, which surprised me.

The aim of the brewery is to supply Rotterdam pubs with the 45,000 liters a year production, though Eric said he is also looking to expand the reach of the beer. I wonder if Freiburg would be too far for home delivery?

We each got 5 beers to taste. As much as I like that Germany is the land of beer, it can often lack the creativity of beer flavors that the Belgian style of brewers has embraced. This tasting row definitely had that creativity.

From left to right, Pelgrim 1580 is their pilsner style. The next is Witbier a wheat-beer with coriander flavors which was nice but a bit more bitter than I expect from a wheatbeer. The amber in the middle was called Lammetjes, which I understood was an Easter time seasonal beer. It was not so bitter and I quite liked it. The next was Delfshaven IPA. I was surprised to see an IPA in Europe, as I often associate that with American brewers. The final dark beer was my favorite of the row. It was a Koffeestout flavored by being stored on Ethiopian coffee beans. It was sweet and coffee-ful at the same time. A number of us mentioned that it tasted like a dessert beer. Had we been staying in Rotterdam longer or had the ability to carry beer around in our packs I would have gotten more of the Koffee and the Lemmetjes.

They had plenty of the wooden racks, so I expect the tasting is a common order. Just ask about it (as I can’t read enough Dutch of my pictures to tell you if it on the menu.)

More about their beers in Dutch on their website.

While we were doing the tasting, we noticed a menu on the wall mentioning things like beer syrup and beer cheese. Ali and I had an early afternoon train to Brussels the following day, and we decided to come back here for lunch rather than wandering the streets. It was a decent decision.

The cheapest appetizer on their menu was a portion of Pelgrim Beer Cheese with Beer Syrup and Beer Mustard to dip it in. That was my first order as I was intrigued. The beer mustard tasted just like normal dijon style mustard to me with the very faintest hint of beer. The beer syrup however was awesome. It was sweet and yet definitely tasted of beer. The cheese was tasty, but seemed a poor mix with the dips.  The cheese was just not porous enough to grip the syrup, so we ended up with a lot of the syrup left when the cheese was done. I would have preferred bread. I did eat a fair amount of with my fork (which also wasn’t efficient.)

The lunch menu was salads, snacks and a few sandwiches. Ali and I both had a sandwich, with mine having beer butter on it. The food was fine, but not spectacular and a bit expensive for that. I didn’t look at the dinner menu, so maybe there were better things there.

I would definitely recommend coming to the Pelgrim, but for the beer and the syrup, not for the sandwiches. They have outdoor seating too. It would be great on a hot summer evening to enjoy some beer on the Delfshaven Canal.

Again I wish we had space in our bags as I would definitely have picked up some beer and some syrup. I can only imagine how good it would be on pancakes or waffles. Ali and I joked about going into a place to order pancakes and bring our own syrup.

The brewery has two cats which walk around in the restaurant. Just a note if you happen to be very allergic. They did not attempt to get on the table while we were there though.

In addition to the restaurant, the brewery runs tours which last 30-45minutes and include history on the Delfshaven area. They have to be booked ahead of time though, so get in contact first. Eric told us that they even occasionally get descendants from the Mayflower who have tracked their ancestry back to the church.

Check out their website with more information (in dutch).

We were the guest of Rotterdam Marketing during the tour, but went back for lunch on our own. In both cases, all opinions are my own.