Have you ever heard of Port wine? I had, but only barely. I knew nearly nothing about it until coming to the north of Portugal. After our travel bloggers conference in Porto, Ali and I joined an after-conference trip to the Douro region. This is the region where the grapes that make Port wine are grown. It is in the north of the country of Portugal and upstream from the main regional city of Porto.

As a part of the trip, we got to experience the Douro region from a boat as it went along the Douro river. From there we could look up at the vineyards that covered nearly every hillside. 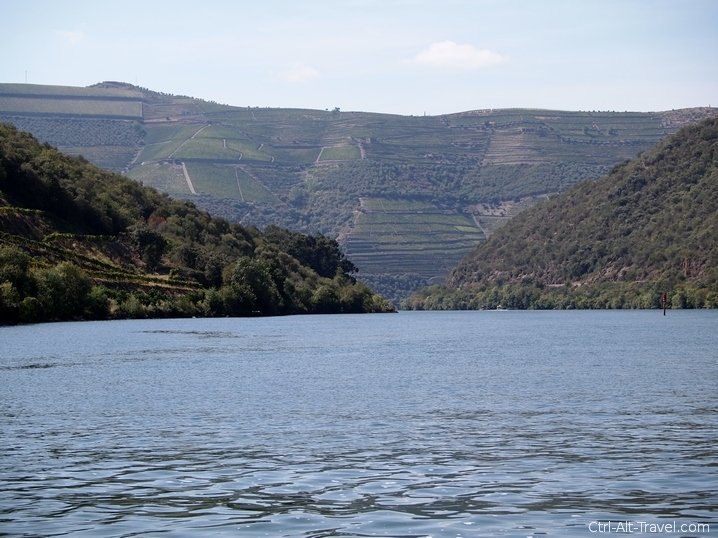 The grapes are grown here and made into wine in the Douro region. The barrels are stored and aged across the river from Porto a fair ways downstream. According to our guide, even up until the 1960’s this job of delivering the wine was done by boat. It was only about 50 years ago that they switched to trucks.

The boats that delivered Port from the region to Porto itself are called Rabello boats. And this is what we got to ride. There were a few on this stretch of the river so I was able to get a shot of what a full boat looks like. I imagine that the high back with the steering oar was so that a pilot could steer and see over a boat loaded high with wine barrels.

Although we drove into the region, we saw trains as well. In the main station of Porto, I even saw an advertisement for a historical steam line that ran into Douro. We didn’t have time to do it unfortunately. We did see the ornamented train station at Pinhão though. If we went back to Porto, I think I would like to try it. We did see a modern train run along the river, so the region seems well served.

Where we got on the boat for our ride was several hours drive from Porto. Along the way our guide, Martha, gave us a lot of history and other information about the region and Port and Portugal. Douro is protected by high mountains giving it a hot micro-climate that is quite good for wine. To this end though, they have terraced EVERYTHING.

Seriously, we were driving along windy roads cut steeply into the hills. Looking down into the valley there was one hill that had no curves left. It was completely terraced to the top for wine. The terraces are wide enough that sun can get to the ground warming it up. This heat is then released at night and keeps the vines warm.

It’s not easy being green

The river itself was very peaceful and pleasant. It was however green.

Yup, algae style, stuff floating in it, green. So not really a place I would have enjoyed swimming in. That said, it made for very lovely pictures. We saw a number of boats from other Rabellos like us up to river cruise ships which I can only imagine are day trips from Porto. I don’t really like being around that number of tourists for that long, but the region is definitely worth visiting. I would probably recommend the train though.

I am normally a fan of looking beyond the typical post card views, but this picture just captured me. I like how the vineyards are still visible and recognizable and yet the boat is the star.

We had a lovely trip on the Duoro river. The cruise was less than an hour, but long enough to get a look at the hills covered in wine and enjoy the warm sunny day on the river.

For some other views check out some of our fellow trippers: It was great not just to see the area, but meet new people too.
Paul of My Postcards From was on our trip as well and wrote about the town of Guimaraes and Craig of Indie Travel Podcast wrote about the whole few days in the north of Portugal.
– – –

We and our fellow trippers were guests of the Porto and North Tour Board for these few days. Of course, my opinions and pictures are my own. Many thanks for the extensive info from our helpful guide, Martha.