As a part of an after-trip to the TBU conference in Portugal last spring we went to the town of Pinhão. This is the same town where we got a chance to take a rabello boat ride on the Douro river. Pinhão has a very attractive tiled train station. It isn’t very big, although is apparently still in working order as we did see trains go by. The tiny station is however decorated with tile murals of the town and the surrounding wine region. So here is a look at the details of this interesting station.

There were a lot of these tile paintings. It seemed like every exposed surface on the outside of the building had one. A few were simply panoramic views of the town nestled in the terraced wine hills of the Douro region. 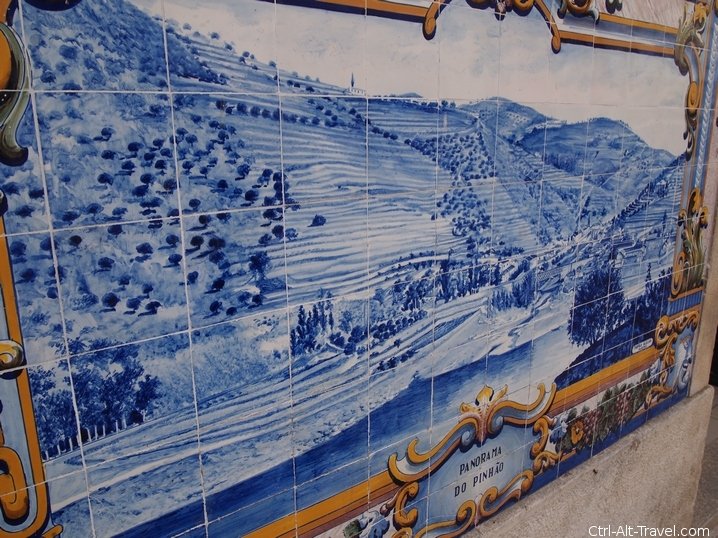 The rest were details of the activities involved with making wine. Women picking grapes and boats shipping the casks downstream to Porto. 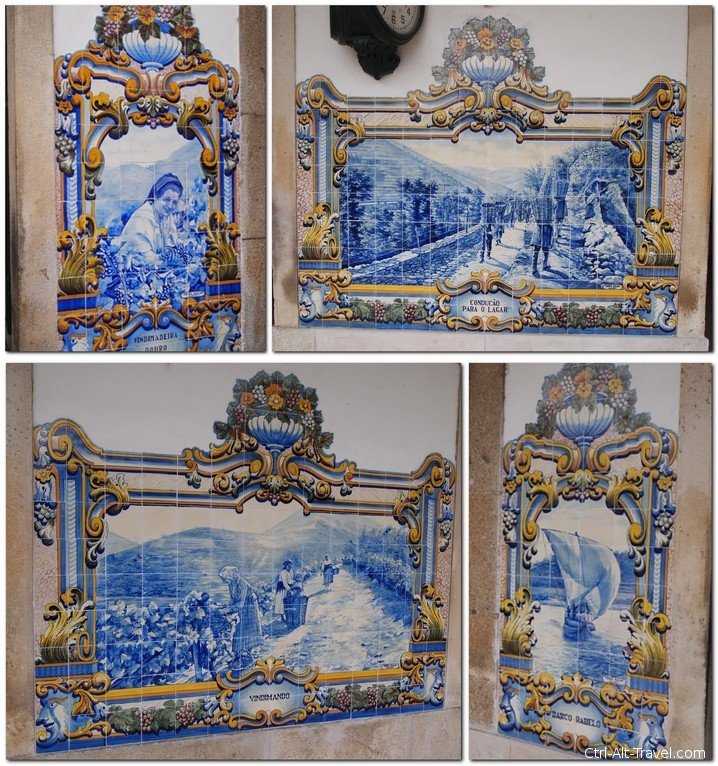 As is normal around here, checking out the details is the thing to do. So here is the full tile painting. It is a scene of the area around Pinhão. That is even the stretch of river that we had just been cruising on an hour before.

Here are some close ups of the details. The scenes themselves are quite detailed and amazing, but the frames are equally fine. These designs are repeated around every painting that I saw.

It is still a train station

Despite all of the beautiful tile scenes of life in the wine region of Douro, it is still in the end a train station. The tracks run right by it and there are trains from Porto regularly.

Even the station sign was made of painted tiles. They don’t take a motif halfway around here. “Linha” is apparently the word for track. Oh and in Portuguese, the “nh” is pronounced like “ny”, so Pin-yow and Lin-ya.

Daring the non-existent approaching train, I took a few really low angle shots. It takes the “looking at the world from different perspectives” quite literally, which is good too.

Oh and I have no clue what this T thing is, but I thought it was pretty cool. It looked more train-like than wine-like, but not sure. It was hanging on hooks inside the station. If anyone has any clue what it might be, let me know.

Of the Dog and Wine

This is wine country. That is evident everywhere. The rabello boats we took a ride on the river in were to transport wine casks. Nearly every exposed inch of every visible hillside is terraced for wine. The pictures on the tile are of the wine. So it is just fitting to see a stack of wine casks. There was a small store/museum for wine in the train station building as well. I am much more of a beer person, but it was neat to see.

The dog was just there. Another of the really low angle shots that I enjoy taking. It was really warm in Pinhao that day and this guy was just socked out asleep in the shade. No, I don’t think that was his cigarette. I don’t really think dogs can smoke.

To prove I was there

So yeah, I like to take goofy self portraits while we travel. Somehow the idea of just aiming the camera at myself is fun. This is pretty much the only one I have where I do not look like I am in pain. It was a bright day and I was squinting a lot.

Also check out Kristin’s look at the station with some more info on the tiles themselves.

Pinhão is not the only place with a tiled station in northern Portugal. There are massive tile panels in the Saint Benedikt station in Porto.