Ali and I spent only one night in Lisbon on our way to Porto. Because we did not have much time in Lisbon, we didn’t get a chance to ride any of the trams that buzz around the city center. We tried taking one out to the tower of Belem, but we waited at the stop and only the modern trams came. So I didn’t get to ride the tram in Lisbon. I was disappointed and made it a point that we should ride the ones in Porto. 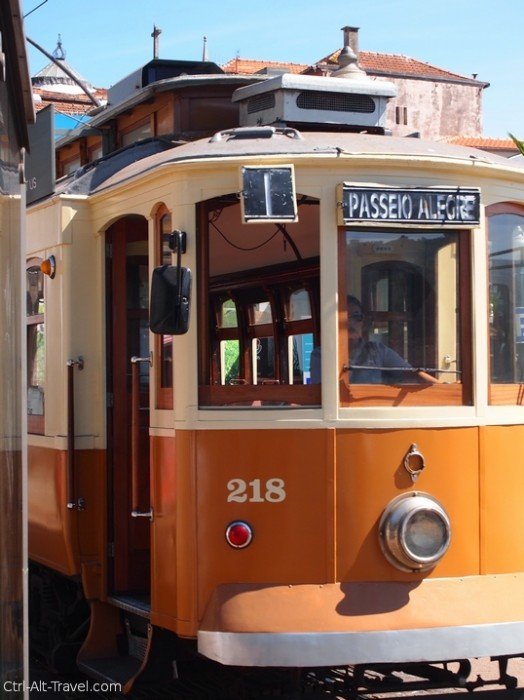 There are several tram lines in Porto. A couple run around the city center in loops and Tram line 1 runs along the riverfront toward the sea. Porto is inland a little from the coast, but has its own beach area. This line runs out there. The end stop at the far end is called Passeio Alegre and can be picked up on the edge of the old town.

Each ride cost us EUR 2.50, though since it is an out and back run, each direction is considered a ride. We were told at a tour office that there is a ticket for EUR 8 for 24 hours, but we didn’t have the time to ride more than one, so we skipped it.

When I travel, I tend to be like a 12 yearold. I like neat stuff. So riding in the tram was just fun. It was also a consolation from missing out on the Lisbon tram. We will go back to Lisbon at some point, but it was nice to have that in Porto. 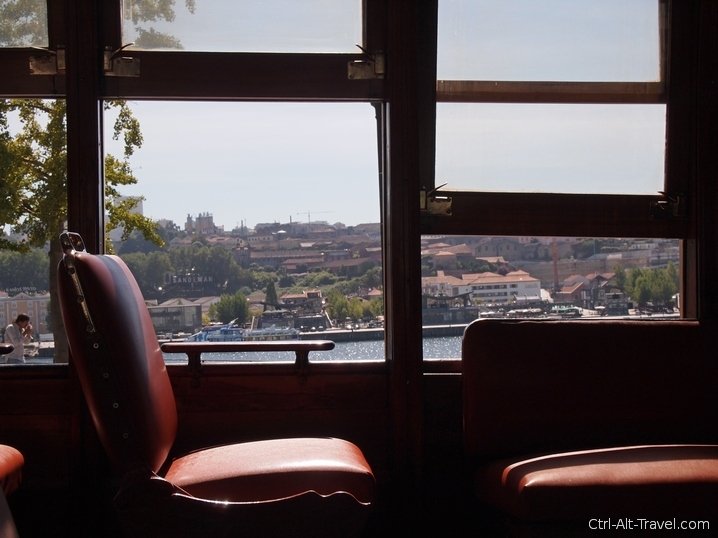 The car is yellow on the outside and a wood interior. Red vinyl seats compete with leather holding straps for those passengers that had to stand. It definitely is not a tourist train built for sightseeing, but a historic tramcar that once served the route as pure transportation. I liked the little details like the inlay wood panels and the metal curly-cues that hold the stop rope.

Run Along the River

So this trip brought us down the river Douro toward to mouth of the Atlantic. Perhaps not quite as historic as the loop in the center of the city, but a nice place to ride on a sunny day. Seeing the little cafes and small neighbourhoods slide by and watching the people enjoy the side of the river.

End of the Line

At the end of the line we got off and decided to wander around a bit before heading back. There is a large park and a long beach area to walk nearby watching the fishermen. We sat in the cool shade of the park for a while enjoying being together.

The walk by the sea was very windy though. We did in the end see the Atlantic and contemplate that this really was the end of the line for Europe for a long time. Beyond that horizon maps had words like “Here be dragons.”
The wind drove us back to take the ride back to the city center. Unfortunately the tram schedule is pretty erratic as we had just slipped into winter time, so we caught the faster but less romantic bus back.