Painted tiles are very common in Portugal. We saw them all over Lisbon and Porto, where they line the outer walls of buildings both as decoration and as insulation. We saw a tiled station in Pinhao. They are not unheard of on train stations, but right in the center of Porto lies São Bento station. Local trains to the region leave from here and there is a metro stop with the same name. The outside is pretty unremarkable, but step inside the front hall and it is completely tiled and beautiful in the detail.

Beautiful Practicallity of a Train Station

This locomotive motif is repeated around the hall. So while the scenes are historical, the tile designer has not forgotten that the place is still a train station.

A train station is essentially a practical building. It is built to manage passengers onto and off of trains. I always like seeing the practical become beautiful. 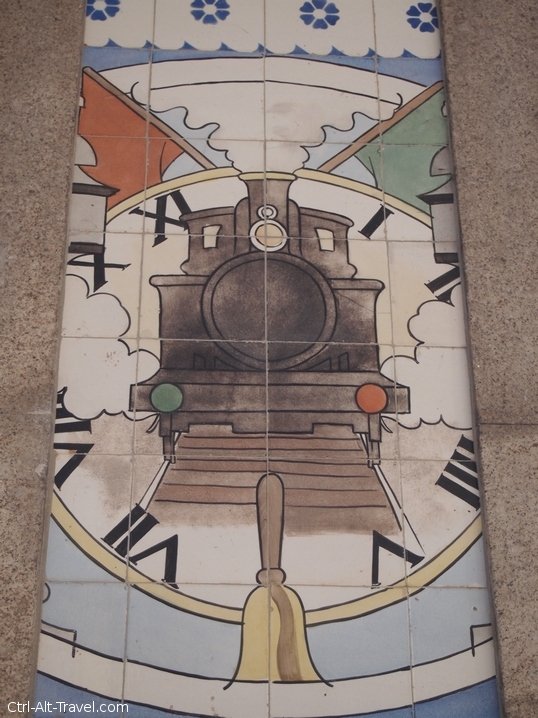 The largest panels in the station are historical scenes that cover entire walls of the entrance hall. According to the wiki page, the scenes are from the 12th through 15th centuries and depict battles, coronations and meetings of kings.
The detail of the tile murals are amazing. A few of the images are linked to larger files. The one with the castle is my favorite. 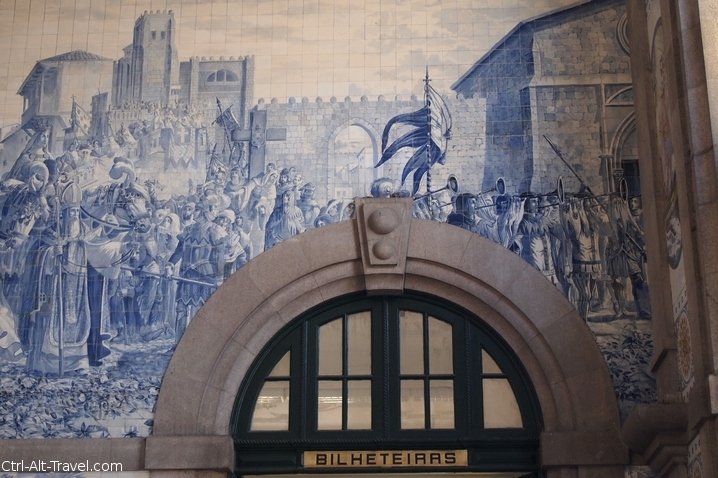 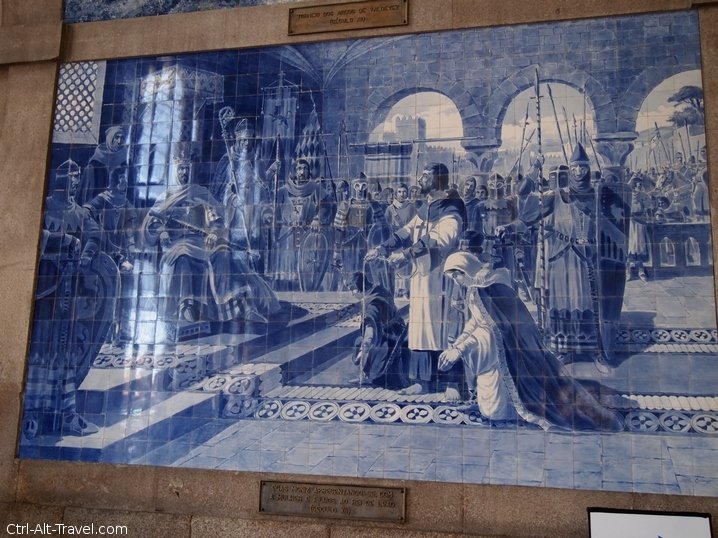 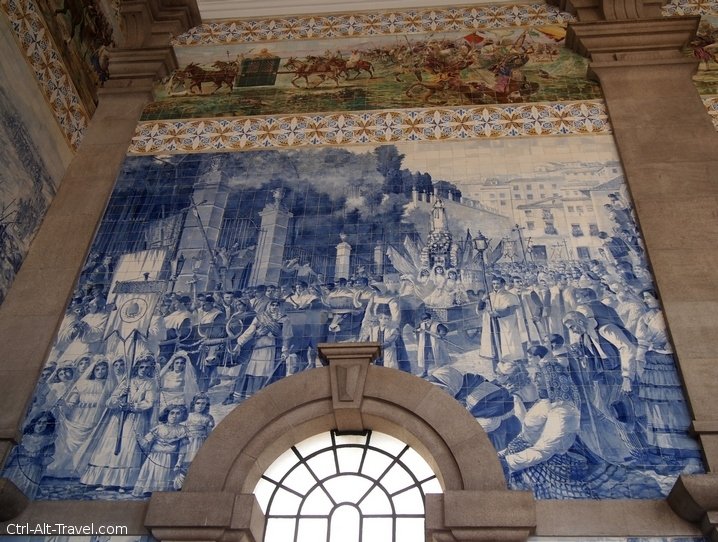 Between the large panels of distinct historic events, there were additional panels of scenes from life in the past. These reminded me of the scenes in Pinhao of the winemaking process, just a look at the life of people. Here is a close up of one mural featuring women. To get a sense of the scale, each of those tiles is roughly 4inches (10cm) on a side and this is just a portion of the overall scene. 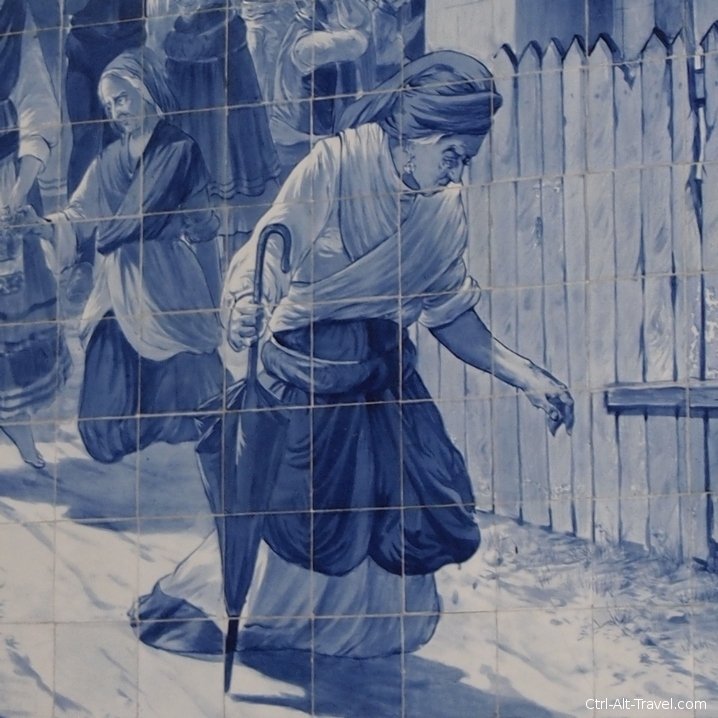 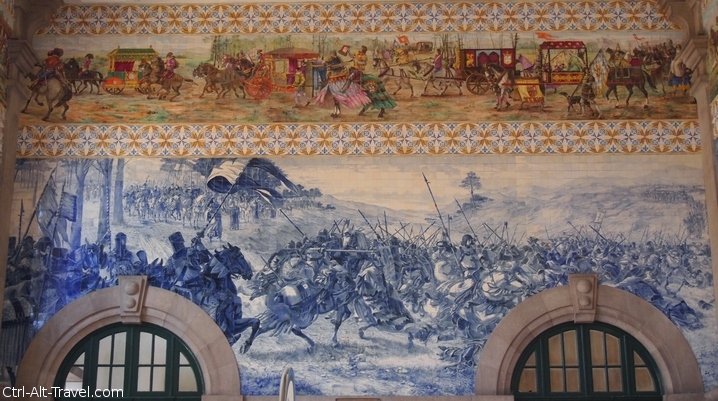 Along the top of the hall is a band of tiles with more scenes. While the main panels are in more traditional blue and white, these are full color. And from what I could see from the ground depict cowboy scenes. If I had not known better, I might have thought it was of the American wild west in places. The scenes all seem to include horses in some form and in one place covered wagons.

The tiles are credited to Jorge Colaço and date from the building of the station just after 1900. I saw 1910 printed in the ironwork when I was there, but have seen references to 1915 online. These historical scenes and life pictures seem to fit with the romanticism of history in the Victorian age. We learned on our Douro river cruise and tour that there was a lot of British influence in this part of Portugal at the time, so maybe there is a link.

Other Details of the São Bento Station Tiles 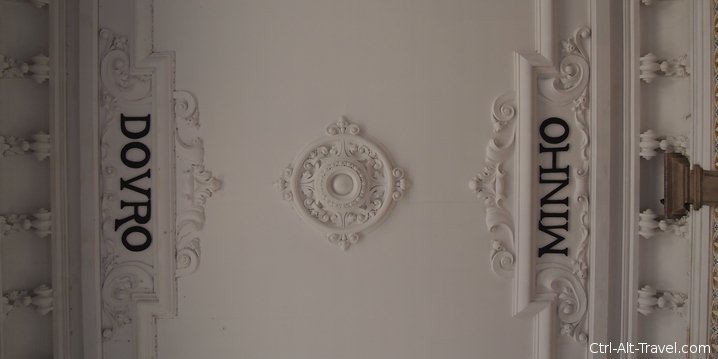 The ceiling of the station is not adorned with tiles, but it is still ornate. The moldings of fancy white plaster line the edges of the ceiling. Right in the middle though, on opposite sides are the words Douro and Minho. These are the two regions north of Porto served by the station. We had just returned from exploring a bit of the regions on our post TBU trip. We had seen the train line in Pinhao as well, so this is where those trains would come from.

São Bento is the local station and right in the middle of Porto. The long distance trains from Lisbon come into a more modern station across town, but the trains to the region start here.

Of Doors and Clocks 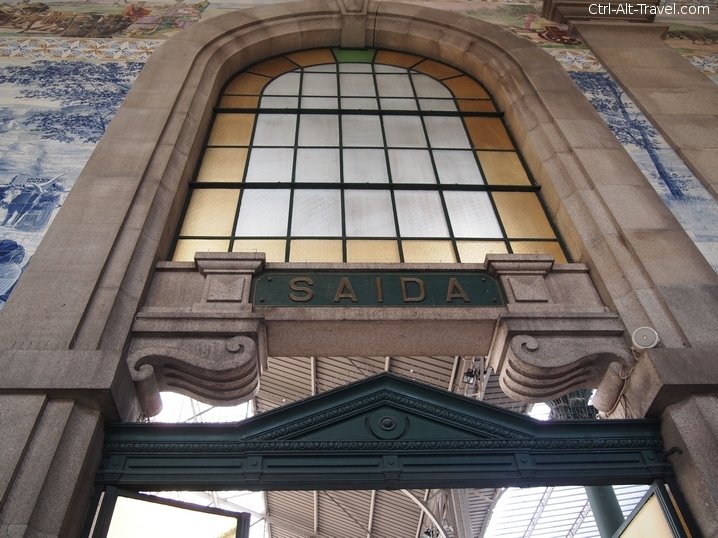 Between the entrance hall with all of the tiles and the platforms are these doors with enormous stainglass details. 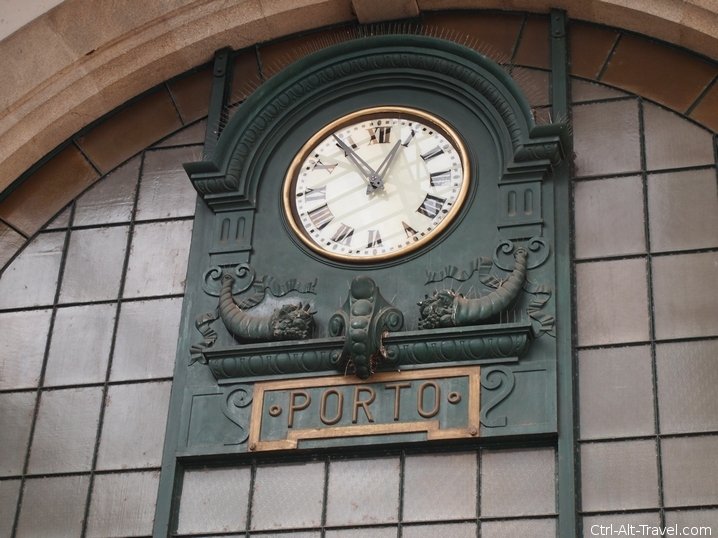 The center of a train station is often the clock. Keeping things on schedule is important for trains. The station dates from around 1910 and the art nouveau style is evident in many things the clock and door above included. As another little detail to notice, the anti-pigeon pins on even the tiny crvings to keep them from getting poo’d upon.

Learning the language through signs 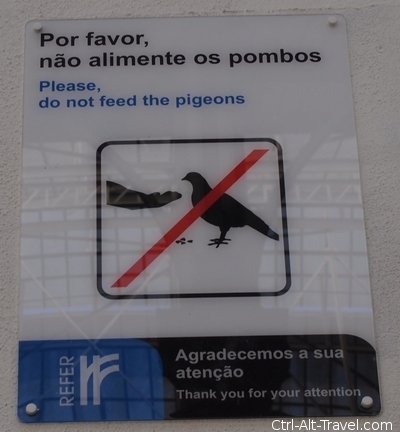 I like signs and have written about them several times(here and here and here). They give a sense of place that is sometimes more real than the intentional architecture. Signs can also be used to learn the local language. With this sign from the São Bento Station amidst all of the tiles, I learned that the Portoguese work for pigeons is pombos. Not going to find that so easy in a language book.

The São Bento Station (Saint Benedikt, as a translation) is a beautiful work of art and well worth a visit. I had no idea of what I would see when we decided to go look inside the station. I just like old train stations so it made sense for a visit. I am a big fan of taking daytrips especially as a slow traveler. So if you happen to head out of Porto for a daytrip, take some extra time to admire the tiles. The station is in the center of town and accessible from the metro stop of the same name.