We didn’t see so much in our four days in Barcelona, but Park Güell was one of the places we got some time to enjoy. We ended up in Barcelona in late August. It was hot. We should have learned this from being in Valencia in late August last year. We apparently did not learn this. So we spent most of our time in the apartment under the air conditioning, only venturing out in the late afternoon for sightseeing and dinner. 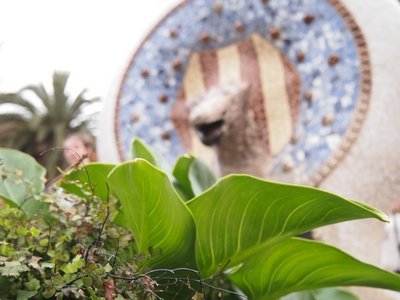 The park is one of the Gaudi designed places around Barcelona. It is a tourist swarmed place, like the Sagrada Familia, but I really liked it. It felt more like a place for people to enjoy and just BE despite the swarms of people. I am really into mundane things like doors that are made to be beautiful as well as functional. So the park with all of its swirly lines and brightly colored tiles was a great place to squeeze through the hordes to enjoy.

The detail that is put into everything is amazing. The park benches are mosaic tiled. And despite being stone are comfortable enough in their curve that I was doing well sitting on them for a while. Overhangs are detailed even where it nearly impossible to see. 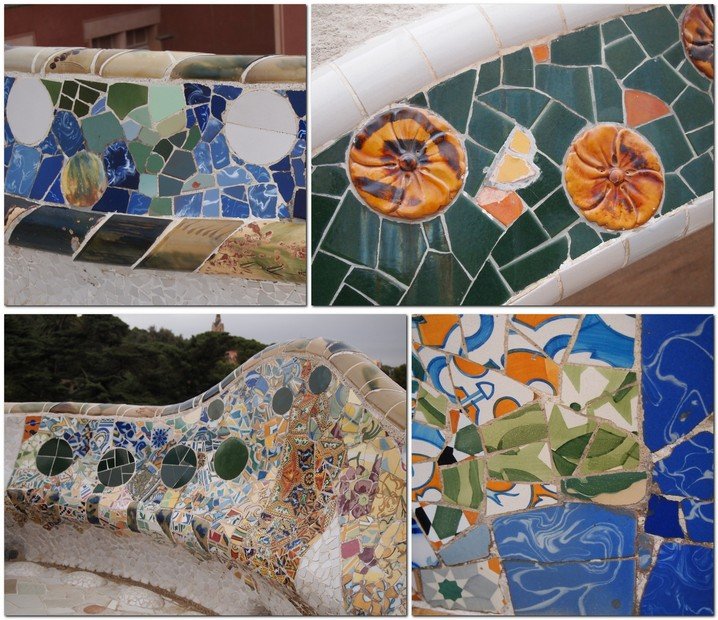 The Park itself is a number of acres spread over a hill or two north of the center. We ended up going up the steep side (including escalators in the streets) to enter in apparently the back entrance. I was a bit disappointed until we came over the hill to see the tiled sitting area. It is massive and open and exactly what I had seen pictures of.

This is what I think of with the park. The tiled area and the colorful buildings flanking the main entrance. Though looking up the hill the details do not stop. There are arches grottos leading around the trees.

Below the vast open seating area is a pillared area with fanciful ceiling tile. As the top has no shade from the heat and sun of Barcelona, I can imagine this is a much nicer place to be in day than above. When we walked through there was a musician playing with the acoustics of the vaulting. This was inspiration. This was travel.

Travel to see and experience the purity of a place as intended. Sometimes to see the place as it really is as well. This came soon enough. Several men with blankets of trinkets and umbrellas of earrings stuffed into a tripod setup in a second and attract customers instantly. From experience they disappear just as quickly when a cop wanders nearby.

Beauty for the sake of it

I know very little about Gaudi. I honestly don’t know what timeperiod he worked in, but I can imagine it was early 20th Century just by the look of things. The swirling lines and decoration for its own sake is certainly similar to Art Nouveau. This I can get on board with though. That beauty and form is as important as function and efficiency.

I have no idea if this is actually on of Gaudi’s principles, but this is what I get from the park. I quite disliked the Sagrada Familia from a design point of view, so I was happy to find something of his that I liked. Barcelona is kind of his city. The references are everywhere. And I liked the city overall, so it was nice to like something of his work too.

So we only saw a few things in Barcelona due to the heat, I am totally happy to have been to Park Güell. I could have done without the hordes and maybe we should have walked up away from the main area, but we didn’t. We merged with the masses, enjoyed the tiles and the music and marveled at the man with jewelery stuck all over an umbrella.