One of the main themes of Ctrl-Alt-Travel is details. Looking at things from unusual angles and really up close to discover places in a new way. Here is a look at the famous Barcelona landmark, the Sagrada Familia, up close. The architect Gaudi has made his mark on Barcelona. His buildings and style, including wonderful doors, is all over the city, with the Sagrada Familia church and Park Guell being the two most famous. The church is still under construction and so highly detailed. I pulled out my telephoto lens and was having a grand time zooming in on details just to see what was hidden up there.

For those of you who don’t know what building I am talking about, here is the standard view. It is a church just north of the center of Barcelona in a park. It really is an amazing building even from this view. 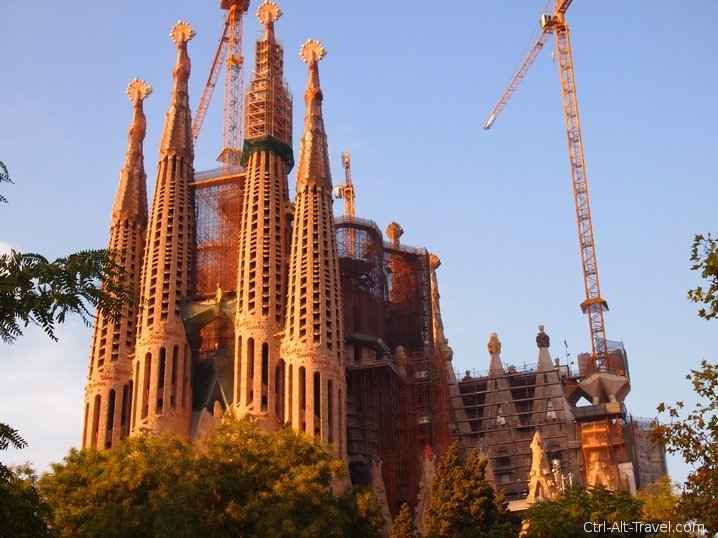 Most churches, even fancily designed Gothic things, are not very colorful. The stone is the color for most of them. The Sagrada Familia though is colorful. Elements are covered in tiles of various colors. This to me seems to be one of Gaudi’s things. I saw it at the Park Guell and noticed it through the high power lens at Sagrada Familia too. 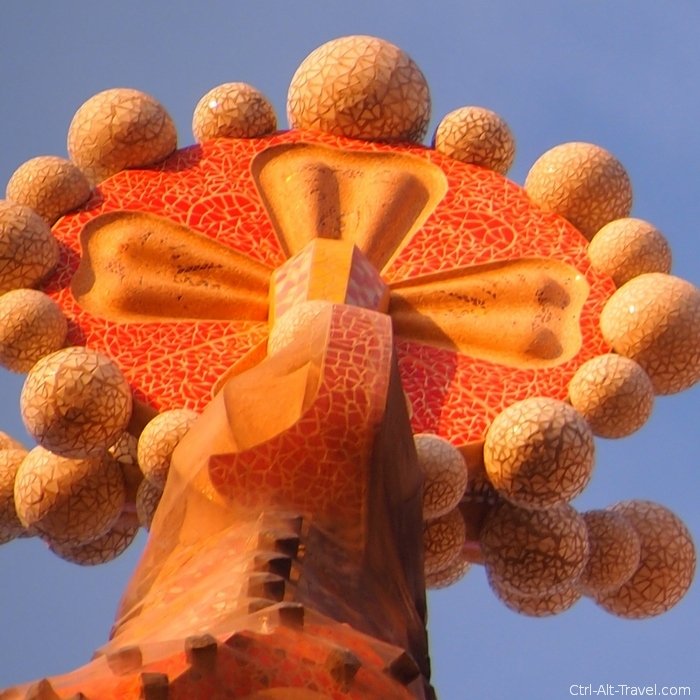 The four towers on the front have a row of “Sanctus” spiraling up. Each one is colored in tiles as well. And not even a solid color, but alternating. This is awesome attention to detail.

People are common statue subjects, but we noticed a whole section that had animals. It was a side section that didn’t even seem that ornamented. It is hard to tell, since the place is still under construction, what is left to do or if they are done somehow. Though given the decoration and color everywhere else, I can well imagine green tile for the lizard and some colors on the snail as well. Even still it is pretty neat to see a snail on the side of a church.

There is one thing about having detail that is visible. The little hidden things even at eye level that you just need to get close enough to see. There is another level of thought to put detail and hidden bits onto a statue that is way up on the side of the church. Oh, and the Sagrada Familia is a big church.

Even though my zoom lens I didn’t notice some of this. It was only when putting together the post that I noticed the writing on the bottom of the statue ledge. Or the lines in the feather she is holding. This is all in counterpoint to the very vague sculpting of the bird.

Or this magic square next to the vaguely homoerotic statue of Judas kissing Jesus to setup the betrayal. It adds up to 33 in any direction yet repeats 10 and 14. In one way it is kind of neat to see math as well on the side of a church, but in another way it just doesn’t fit. Why? I still have no idea.

As appropriate for a church, the figures are all from biblical stories. This is not new. Most churches have statues all over them of various saints and figures. Each carrying their symbolic item. What I found interesting here is the explicit labeling. There were a row of statues labeled as apostles. The use of words on the side of a building is kind of neat actually.

The whole front of the church above the entrance door was split into several “hollows”. Each though showed a different aspect of the passion. Of Jesus being betrayed, taken, crucified and mourned. Each area was a different aspect of the story. What was kind of neat was that the Roman guards were just faceless soldier figures. Almost like storm troopers in their angularness.

Detail for its own sake

Like much of Art Nouveau, the detail and decoration seems to be there for its own sake. it is really pretty, but without function. And nearly every inch of the facade has this kind of thing in all manner of permutation.

The tips and spikes were crowned with forms that look like vegetables and grains, colored with tile appropriately. Even the statues I have here are just a tiny portion of what I saw. And even for that, we only had time to walk around a portion of the church before the sun set, and I didn’t even get inside. So, there is kind of no wonder that it is still under construction. With all that detail I can only imagine how long each piece takes.

If you want to see more close ups of some of the statues, head over to the Ctrl-Alt-Travel Facebook page.