Turkey is a quite varied country. It is also bigger than it seems on the map. When we started planning our honeymoon trip, we made a list of things we wanted to see and Cappadocia came to the top of both of our lists. Then we started looking at what it meant to go there.

Where is Cappadocia, anyway?

The soft rock of the region is the basis of pretty much all of the sights. This rock has been bored into and shaped by humans for many centuries and by nature for longer. There are amazing examples of both spread across the region. This is definitely a nature area rather than a city trip. 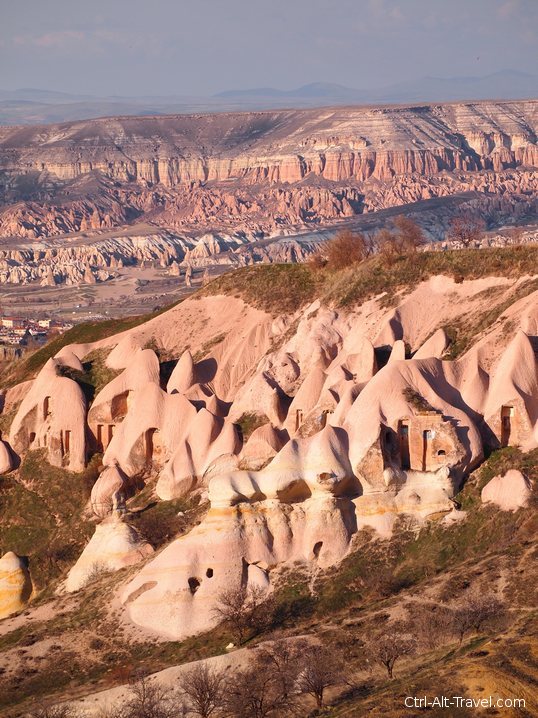 We had a little less than 2 weeks in Turkey for this trip. This is no where near enough time to do more than just get a taste of the country. We played it very fast, almost too fast in fact. We were in Cappadocia for 3 nights, though the first night we got in at midnight and the first day was spent recovering and not really doing much.

Was this enough? Sort of.

I would not have wanted to spend an extra day there on this trip. It would have meant less time elsewhere, but since it is a bit of a time investment to get out to the region it is worth spending more than just a day or two here. Although there were a few things I would have liked to have done with an extra day, I didn’t feel inordinately cheated. If you like hiking and nature-y stuff, it is worth a number of days. 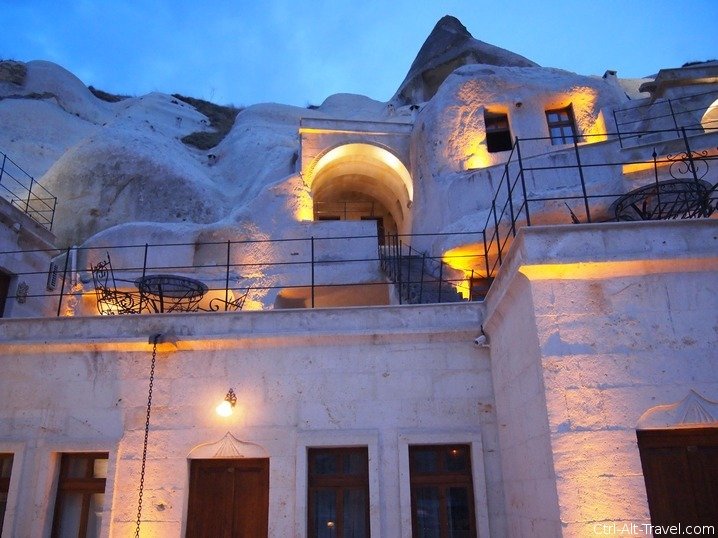 There and Back Again

Goreme is the central town where most people seem to stay. Kayseri is the airport that seems to make the most sense and has pretty good connections to Istanbul. It is an hour from Goreme, but we were able to get a transfer free from our hotel. The transfer vans apparently work with a number of hotels as our van was full, but dropped people off at different places. Unless you have a car, really think about a transfer from the airport. I found no public transport options that would have worked with our very late flight.

Overnight bus is the other way in or out of town. If the list of places the buses were heading out to is a good indication, pretty much anywhere in tourist oriented Turkey will have an overnight option to Goreme. We did find a daytime bus from Goreme to Izmir but it was something we did ourselves. The bus companies seem to only know the direct buses and no transfers. Try to get a bus with internet if you can. Our few did not, but some next to us in the bus stations did.

The biggest attraction are balloon rides. Get up early and drift among the rocks in a balloon. It is amazing. Our hotel manager was quite helpful in setting up the balloon ride for us. With a company he knew and actually even getting a discount for the four of us in the hotel. It is expensive (140-150Euros depending on the company and discounts) and means a very early morning, but well worth doing.

Van Tours: Red, Green and whatever van happens to remember you

If you don’t have a car, van tours seem to be the way to see the area. We spent our first day wandering around looking at different tour companies and their routes.  In the end, for us, it didn’t make a difference. Our booked tour company forgot us and ended up shoving us on a different company’s van. There are two routes, red and green, which each go to a different set of places, but the differences among the companies seems minimal from what we say. If you have a car, you might be better off getting a guide book and going off on your own, though do the math as the tours include entrance to a lot of the sights.

We booked a van for the green route, which heads south and west of Goreme to Ihlara Canyon, by way of Derinkuyu Underground City and returning by way of Selime Monastery.

If you like hiking, there looked to be plenty of opportunities. Maps were for sale in a bunch of different places. I even saw a place renting ATVs for a more speedy outdoor option. There are a couple of nearby towns that we drove nearby on our tour that looked neat and I did find public bus mentions of how to get out there. Though in the end we just didn’t have time. Cappadocia ended up being the place for our down day.

There are plenty of hotels in Goreme. The rock of the region is soft enough to shape and a lot of the hotels have burrowed rooms into caves and advertise as such. We stayed in the Spelunca after a review on Natalie’s site. It was fine. Way up the(fairly steep) hill, good wifi and the nicest and most helpful hotel clerk we ran across. Here is also a link to a look around Goreme again on Natalie’s site.

There are plenty of restaurants in town too. The town is not very big, but seems to be perfectly capable of taking care of tourist needs. Hit the supermarket for snacks before you get on our overnight bus though. There isn’t much in the way of fast food or street food like in the rest of Turkey though. I stopped for a doner before a bus and he was microwaving it.

A apparently local dish is a doener in a clay pot. Although it sounds traditional, apparently(I remember reading this, but cannot find mention of it again to link) it was created for the tourists in modern times. It is still tasty, just don’t think it is traditional.

Is it worth it?

You are committing to a flight in and out or several overnight buses so a fair amount of time spent in transit.

So is it worth it to go out to Cappadocia? Yes, I think it is.

It is a touristy kind of thing, but for good reason. The region is fascinating and beautiful and the balloon ride is amazing. Also it is neat to see a bit of rural Turkey to compare with the bustle of Istanbul.

Beyond the Postcard Vistas

This is an area that is built for tourists. Tours are easy and tour companies plentiful, each with their sales people offering tea. Hotels abound and so many of the vistas of pretty rocks blend together a bit. This area is incredible, but I did feel a little bit like I was attached to the tourist track much more heavily than elsewhere on our trip. This is also reflected in the online searches that offer tours.

I think to get beyond the scripted tours, you are going to need your own transportation. Our hotel guy offered to drive us up to a specific valley if we hadn’t seen it on the balloons. We didn’t have the time to take him up on the offer, but I think that might have been good to see some stuff without a salespitch.

There are also several other towns other than Goreme including Urgup. There are buses I found, but not with big-cty style timetables, so without a car it would have been a trek. I definitely think that is something I would like to get into doing, but as it was our honeymoon, it was a trip we were taking it easy on.

Despite the number of tours and setups built for tourists, it was perfectly doable for us to book all the pieces separately and maintain both our flexibility and schedule. Cappadocia is definitely worth a stop on your Turkey trip if you have a few days to spend there.