Cappadocia, Turkey is known for two things: crazy rock formations and balloons. As I explain our travels through Turkey to friends, I get slightly blank stares when I mention Cappadocia. And really, it is a region not a city, so maybe that makes sense somehow. But once I mention balloons, I get recognition. So we knew this was one of the things we wanted to do while there. 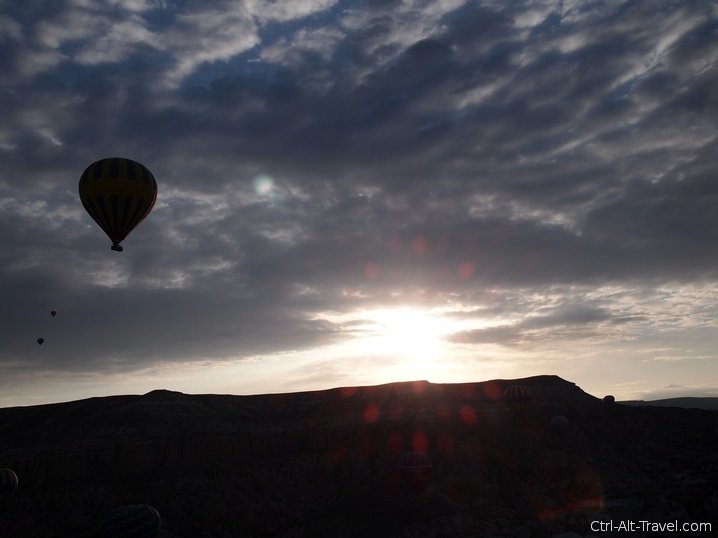 They fly balloons at dawn and it was approaching summertime, so it was even earlier. We got picked up at 5am. This is very early for us normally late sleepers, but we were excited. The funny thing is that the bus that came to pick us up wasn’t even the company we thought we were going with, but oh well we had learned that companies shift a lot here.

We were rushed to our buffet amidst a large group of other people and sat down at a table with the name of our pilot on it. Just as I was ready to put my buttered roll into my mouth, a guy came by to tell us that our pilot was ready. The air conditions were right and the vans were going. So I stuffed a roll into my mouth and another into my pocket.

Ok, I have a fair fear of flying. I really don’t like airplanes and take drugs to get on them. I even get nervous in cable cars. We had a rough flight just a few days earlier and between that and the early morning tiredness, I was beginning to freak out a tiny bit. I knew I wanted to do this and had read enough other people saying it was perfectly fine, including people like me with a fear of flying. So I knew I would be ok, and I was not willing to back out of it. Still as we were driving around in the fairly frosty morning air, I was getting nervous. 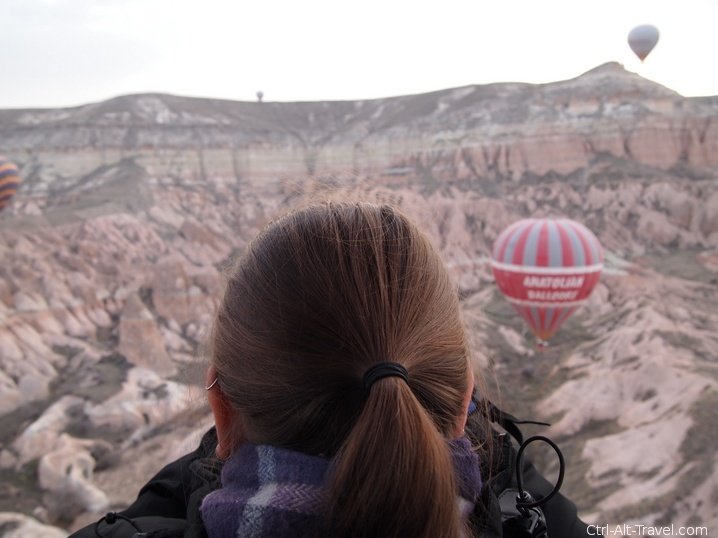 It didn’t help when I saw a small safety brochure that implied that the balloons land and fall over. You have to grip on tight to keep from falling out somehow. Yeah, I didn’t like this idea at all.  Though I started to loosen up a bit as the balloons started filling with hot air. They really are very majestic even on the ground.

I got a space in the basket behind Ali so I had little danger of looking down and freaking out from that. Then our pilot pressed down on his handles and the roar of the propane jet started. The cold washed away and the balloon just gracefully floated up.

Rising Above the Rocks

The feeling of vertical motion is less than even an elevator. And with so many other balloons in the air around, above and below you, it doesn’t feel isolating at all either. We only went really high once or twice that I didn’t like. The rest of the time was absolutely gorgeous. Getting to watch the sunrise from a balloon floating above valleys filled with penis shaped rocks is pretty amazing.

Our pilot was expert it seemed. He floated us down into the field. Told us to hold on as taught in the beginning. Though, being taught safety rules at 5:30am is not really a good thing for remembering them, but we did ok. The balloon did not fall over. With the help of the ground crew, he even landed it directly on the trailer.

Champagne and cake is apparently a tradition in the ballooning circles. This is nice as we didn’t really get much breakfast.

In the end, there was no fear once we took off. Really I had such a wonderful flight that I was wondering why I even though it might be frightening. The balloon was so smooth and I didn’t really feel disconnected with the ground except for one or two times. The baskets are big and sturdy and the pack enough people into them to feel stable.

I would definitely recommend doing it. Yes, it is expensive. And yes, they wake you up insanely early, but it is such a wonderful sight to see. And don’t stress so much about the company, in the end you might not even get the one you thought anyway.