As a part of our trip through Turkey we spent several days in Cappadocia, a rugged and beautiful interior region. We didn’t have a car, so opted to take a van tour. The green route tour that we took went through the Derinkuyu Underground City, one of a number of underground cities dug into the region. It was a fascinating, if a bit frightening part of the tour.

What is the Derinkuyu Underground City?

The Derinkuyu Underground City is a complex of caves and tunnels that extends 85m down into the soft rock of the Cappadocia region. It sounds deep and it is. At the deepest, there really is a sense of all of that rock above you. 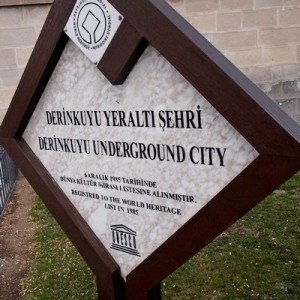 We were told that it was a haven for Christians during times of persecution, though some of the references I can find while researching now don’t necessarily mention the Christian connection. We did see a church(main room in the picture below) laid out in typical cross form with crucifixes etched into the wall, so there certainly were Christians there at some point. It was a place that the entire village (including animals) to live unseen underground as protection. They could cook, sleep, socialize and worship as they saw fit. Now this is faith, to dig an entire village out of the rock. 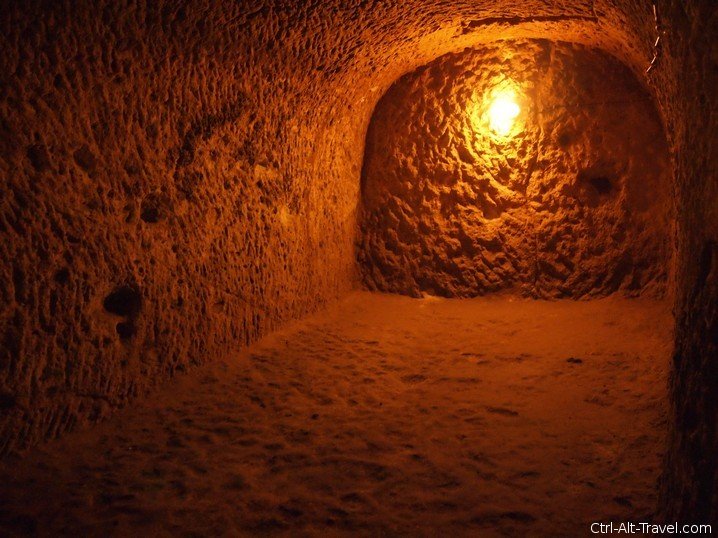 I read a lot of fantasy novels and the places I go inspire that whimsy. I grew up reading Tolkien (which is not really that easy to read when you are 12) and C.S.Lewis’ Narnia books. Dwarfs and underground cities are a very common in such books. The books talk about living underground and being ok. This was fascinating to experience real underground life. Sure, this was human made and not dwarven hewn rock, but still not exactly what I would have expected and will definitely affect my writing (and reading) of fantasy stories henceforth.

It is also fascinating both historically and geologically. That for centuries human beings were both so afraid for their lives and so dedicated in their faith to build such a complex. Add the geologic aspects of being able to do that. The rock is soft enough to shape and yet stable enough to hold form. Pretty fascinating.

The evidence from above of a city is fairly small. A few shafts bring air down and allow smoke to escape. The air down there, especially seeing that there were animal pens and latrine areas, was not really rosy fresh, I imagine.

The rooms are spacey (for underground caves dug from solid rock) but the tunnels are fairly narrow and low. I hit my head several times. Like full on thwack on rock kind of booboo, not a gentle scrape. Not my favorite place for that reason. Even hunching over with my backpack on, I scraped the top of some tunnels. I am nearly 6 foot in my boots. These were not tunnels made for space.

In most places, the tunnels are adequately (if dimly) lit with electric lights. A few tunnels though near the bottom are fairly long, angled downward and without light. These were pretty frightening to go through. Mix the dark with stairs and the narrowness and you can get a feel of claustrophobia fast. I can only imagine what it might have been like for people with torches for like.

Don’t let my artful photos fool you, there were a lot of people with us in the underground city. Nearly all of the vans arrive at the same time, taking the same route. So while your guide and group may only be 12, there are 6 other vans doing the same tour in narrow passages. I waited in places to get clear shots without the crowds. This crowdedness was actually interesting to get a chance to feel a tiny bit of what it might be like to live around many multiples of this number (20,000 seems to be mentioned a lot), but makes the closeness and claustrophobia more acute as well.

We went to the Derinkuyu Underground City as a part of our van tour. The price we paid for the tour included tickets into the site. From entering to leaving was about an hour, and that was plenty. I was more than happy to get back topside.  We were there around 8am until 9am, so if you expect to go on your own, it might behoove you to avoid that time due to the vans.

The site is about an hour from Goreme and the deepest of several underground cities in the region. It is also a World Heritage site. Here is a slideshare presentation with more pictures and info.

Was it worth it?

It was really fascinating to see, but would not have been something I would have done if it had not been on the tour. If you already know you don’t deal with caves or close spaces well, skip it.

Photos underground in that dim yellow light was not great. Though I did take a few with flash, I was not at all happy with the effect. I did learn on our trip under Istanbul at the Basilica Cistern, that my camera has a “candlelight” scene setting. This seems to be just the thing for low light, and while I did get a number of fuzzy shots, I got some decently crisp ones too.