Last year, Ali and I spent our honeymoon in Turkey. Just under two weeks across Turkey is really not much time, but it gave us a look around the country.

Cappadocia was our middle stop on the trip. We were only there a few days and like the whole trip, this was not enough time to do more than a quick look around. Since the region is so wide and we did not have a car, we decided to take one of the van trips offered from Goreme town to see the sites. Here is a look at what our trip got us to see. 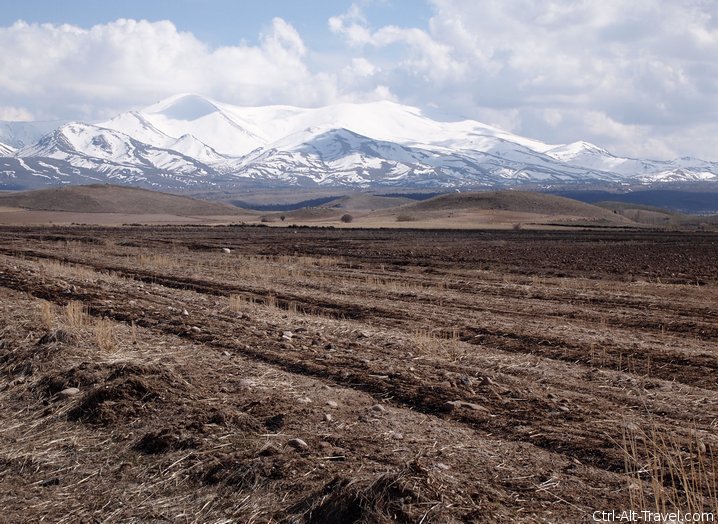 As you walk around Goreme, there are tons of tour operators advertising these van trips. They are only outnumbered by the signs for balloon companies. We, naively perhaps, decided to shop around a little on the vans assuming there would be differences. It seemed though that each one followed the others around. We picked one and booked it. Though the next day they apparently forgot about us and shoved us on a different company’s van. So our shopping around meant not much in the end.

There is a green line tour which we took and a red line. I did see signs for a blue line too, but no one that we talked to offered it to us, so dunno. The green line van tour involves a lot longer of drives as it goes further from Goreme than the red line, however both are all day tours. Click the titles for more detailed posts on each area. 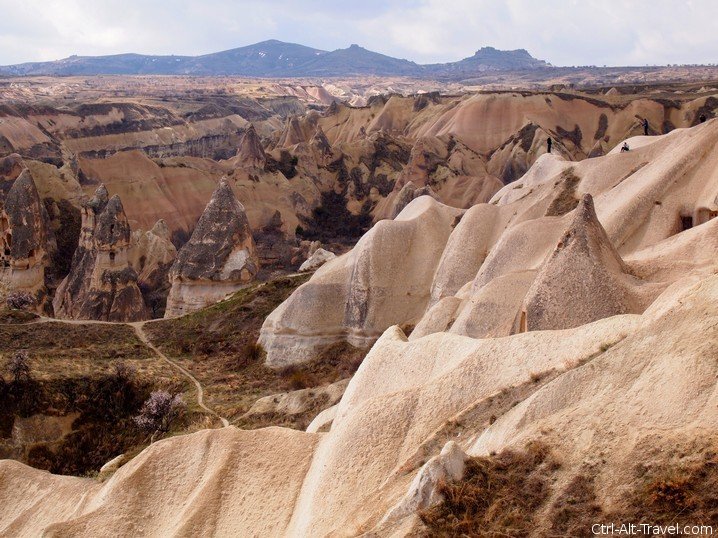 The first stop for us was where we first met our guide and van. An early morning overlook of pigeon valley and a sand castle looking town. It was fairly early and the light was not good for pictures really. We were also rushed as the tour guide was ready to move on and we had just arrived. She was shouting for us to get into the van as we just wanted to enjoy the view. 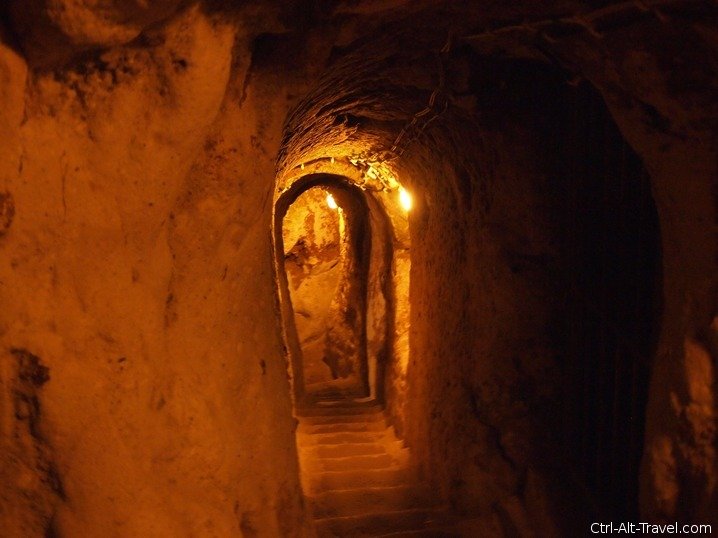 The rock in Cappadocia is soft, which is why the forms are so interesting in the valleys. It is also soft enough for humans to carve. This human carving of soft rock is kind of the theme of the trip. Our first stop after the valley and nearly hour drive was one of many underground cities in the area. The city we visited goes down nearly 8 stories. 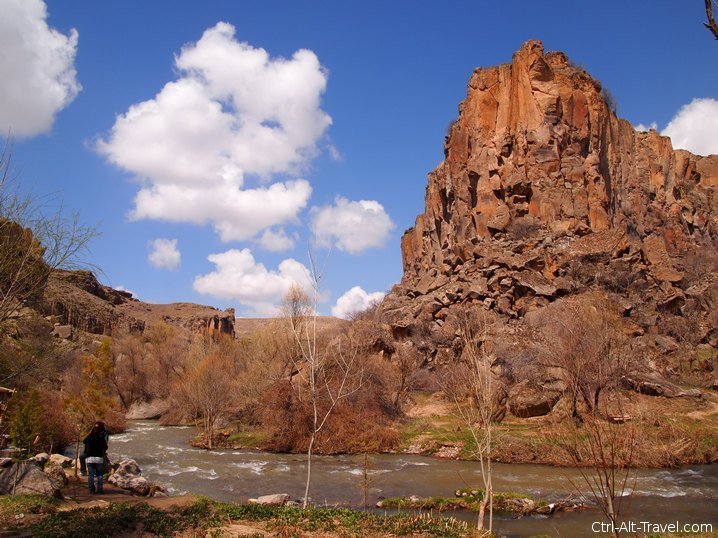 This was the main highlight of the green line trip. To walk the Ihlara canyon and see the cave churches carved into its walls. It was a bit early in the season, but still the canyon was lusher than the surrounding lands and was an interesting feature of the area. This was also the stop for lunch. 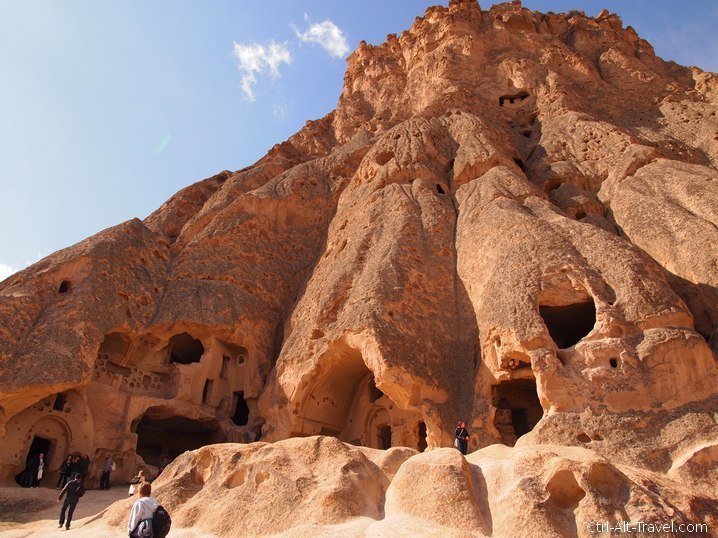 Continuing the theme of humans carving the soft Cappadocia rock, we visited the Selime Monastery at the top end of the canyon. Monks carved a mountain into their place of worship and now hundreds of years later, tourists crawl all around and through it.

And Back to Goreme via Pigeon Valley again 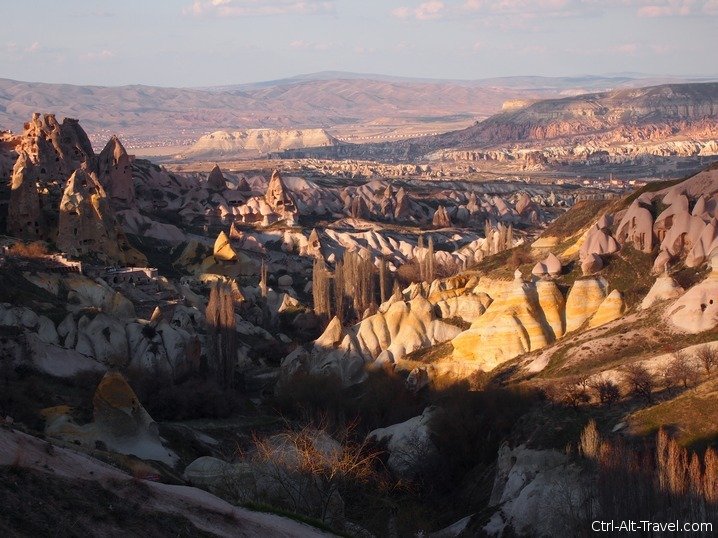 This was a better stop at the valley. The light was much better for pictures and we were less rushed.

Umm yeah. It always seems to happen on tours like this. You “get” to stop at a shop that has “real local wares” and “samples you can try” of whatever the local food is. I get it. This is part of the deal. Tourists often do want to buy souvenirs and I can only imagine the tour companies have a deal with wherever. I almost never buy stuff here and am happy for the bathroom.

There was an Onyx Factory on the trip schedule as well, but we were running late and thankfully we got to skip it. I wanted to see nature not trinkets.

Was is worth it?

Based on the scribbles of the map we kept, I think we paid 90TL together for the trip. So about 25Euros each for the whole day, entrance into each area and lunch. The group was small (only 15 or so) and there was a guide, though her accent made it hard to understand sometimes. So yeah, the price was pretty good given the sites we were able to see without transport of our own.

I am usually not a fan of large tours, but I have done van daytrips in Ireland and France before and quite like them. If you get a good guide and group, they can be fun with minimal time investment unlike a large bustour. It is still a tour, so you are rails a bit, only going where the tour goes. Fair enough, just need to know what you are getting into.

If you don’t have your own transport, I do recommend doing a van tour.

If you do have a car, check out which sites you want to see and count up the gas and entry fees and a bit for your own flexibility and just do the math.