Selime Monastery : Carved into a Mountain

As a part of our few days in Cappadocia, we decided to take a van tour on the green route around the region. The route heads south and visits a few places. The last thing we saw before heading back toward Goreme was the Selime Monastery. I don’t have as much info about this place as I was tired of listening to our guide and wandered off, so it will be a lot of pictures with comments.

What is the Selime Monastery?

It is a monastery complex carved into the rock. Similar in some ways to Meteora with its location into the rock, though from what I could see was not at all built up. Apparently built in the 13th century, they carved into the rock and used it like that. The monastery is in a region called Guzelyurt, which is just about the coolest name I saw in our two weeks in Turkey. 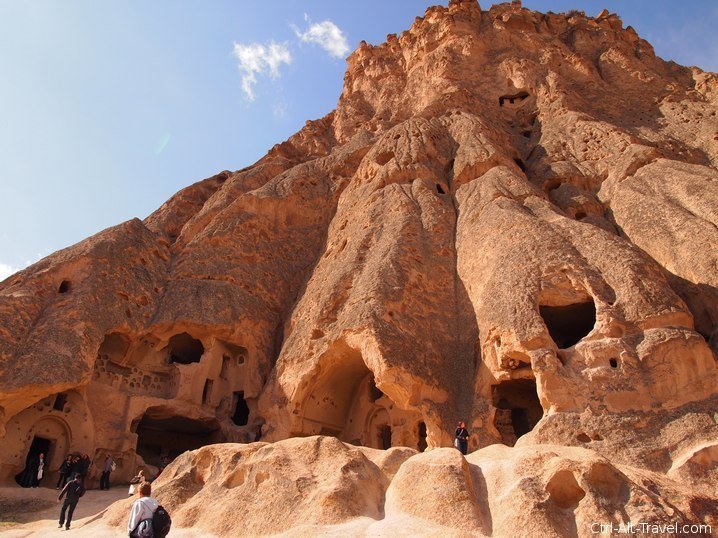 I am all for the geeky things. I seriously want to see Tikal in Guatemala due to both a boardgame and a few seconds of film they used in Star Wars. I had heard mention that the Selime area was also used in the movie, so I was excited.

Yeah, apparently it isn’t. Just a similar look to the landscape. As far as I know, the desert planet of Tatooine was filmed in Tunisia. And you better believe I am totally excited to go because of it.

I wandered off from the tour*

So yeah, after several hours listening to our guide, I just couldn’t deal anymore, so I wandered off. I climbed in and around the slopes and half-stairs. I found a few neat windows up higher as well. The rest of this will just be pictures and comments.

This is kitchen spire/cave of the monastery. It was set apart a little bit, though I can’t imagine fire to be an issue when the place is solid rock.

I didn’t walk through the back tunnels much due to time, but there looked to be a fair number of rooms carved into the hill. Not just caves, but real rooms.

The peak of my wanderings brought me to this room with a rock window. I quite enjoyed taking a bunch of different pictures through the same hole.

It definitely was a religious place. Apparently there used to be frescos and color on the walls, but those traces are gone.

What a beautiful day we had. The view from the monastery out across the rocky plain toward the mountains. Turkey seems to bring fantasy vistas to my mind at many turns.

This is one of my favorite pictures from the site. It took a few minutes of waiting and holding people back to get a tourist-free shot down the tunnel.

As with Derinkuyu Underground City, our van tour included tickets to the site. We had about an hour to wander around and it was nearly enough. As you can see we had a wonderfully blue sky day, and it would have been nice to just find a place to sit and be for a while, but that wasn’t on the schedule.

I skipped going into the chapel areas to explore where there were fewer people. I think if I had been there earlier in the day when I wasn’t so tired after the tour, I could have spent more time exploring. As it was I was happy to see, but was also happy to get back to the van going home.

It was worth seeing and something I would suggest hitting up even if you have your own transport. It is pretty high in places and there are no guardrails, so if you get vertigo, maybe you don’t go so high. Still pretty amazing to see that people really did live here.

More info and more thoughts at this blog post as well.