From Goreme to Izmir: Fast Decisions

Turkey has an excellent bus system. We were told this quite often, by expats living there, fellow travelers and guide books. It is in fact true. The bus system seems to go everywhere, but it is somewhat difficult to navigate. There are multiple companies with similar routes at slightly different times. Any one guy only seems to know the direct routes from his office to other places. So routes that require changes are something you have to figure out yourself. 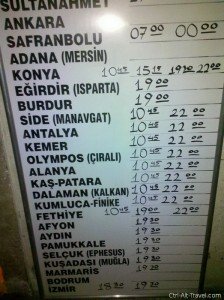 We had planned the beginning and the end of our Honeymoon trip to Turkey. This left us flexibility on the middle part. Enter our crazy trip requirements. Turkey apparently has a train system, but it was nearly completely shut down when we were there. We had a quite bumpy flight into Cappadocia a few days earlier. I hate flying on good days and although I got through the flight, I was unwilling to fly again given a choice. We knew we wanted to be in Selcuk, so to avoid the flight we had to take the bus. Ali can’t sleep on buses, so an overnight bus was out of the question. We had been having bad beds throughout the trip, so another night without sleep was not appealing. Even though we were doing it adventure-style, this was still our honeymoon.

This is where the idea that each bus office only knows their direct routes caused us problems. Looking at the extensive route map, we knew there had to be ways to change buses somewhere to get from Goreme in Cappadocia to Selcuk near Izmir on the Aegean coast. Many of the routes out of Goreme were night buses so that limited our options. We ended up choosing a late morning bus to Konya. Our hotel guy assured us that Konya is a big city and had really great connections.

Normally I don’t lend much stock in timetables on long buses. This is true no matter what country, but even more so in countries like Turkey where time seems to be a more flexible concept. Despite this, we ended up getting to Konya nearly 30 minutes early, which ended up being our saving grace.

A quick stop at the bathroom and we wandered into the enormous modern bus station. We figured we were stuck here, but it would be another city to see before heading to Selcuk the next day. We just wanted to know what times those buses were running. We had flexibility, but didn’t want to lose too much time. This meant a quick look at the schedules before searching for a tram into town. 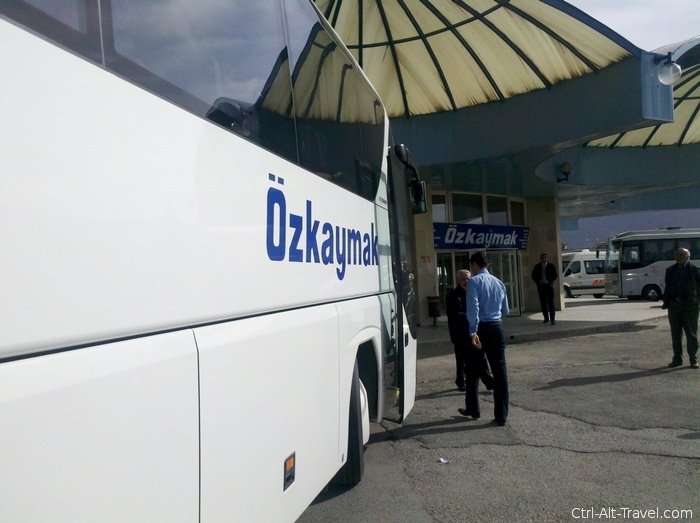 We were virtually accosted by a guy nearly as soon as we walked in. He seemed friendly enough, but spoke no English. After several tries, he directed us to another man near a counter who spoke some English. We lucked out! The counter he was leaning against was for a bus company that had a bus to Izmir leaving in 15minutes. We made a quick decision (which is amazing for us in general) and bought the tickets.

Then the first guy started leading us off to the bus to make sure we got on it. We kept pointing at food saying we were hungry. He kept insisting we follow him to the bus. Worried we would miss our close connection, we just went with it. It worked out. We were able to drop our bags into the luggage hold of our bus. Thus unburdened began the most productive 15 minutes of our trip.

we went looking for food. We had been up since 5am for a balloon ride in Cappadocia that morning. We had eaten and only sat on a bus, but the body still needs food. We found a Doner shop and I left Ali there. I ran across the plaza to a kiosk to buy water and chocolate bars. (Turkey has a pretty good selection of chocolate. I was impressed.) Coming back with my selections she was just paying for a sandwich to share.

This left us 5 minutes before the bus was set to leave. We see the wi-fi bulb on top of a neighboring bus and Ali makes an offhand joke, “wonder if we can make a hotel reservation for Izmir in 5 minutes.” We knew the bus was getting there late and it was not so appealing to think about having to find a place after midnight. We both whipped out our phones and hooked into the wifi and started looking through hotels. Ali found one near a train station (at this point we had NO clue what Izmir was like, just that it was an hour from Selcuk, our end destination.) It had decent ratings on Booking.com and she started typing like the wind to book it. I was reading off credit card numbers as our driver started waving at us. (Thankfully he had helped us with the luggage and knew we belonged on his bus.) The hotel was booked and I got the confirmation e-mail with the address saved on my phone as the other bus pulled out and the wifi faded out.

So we got dinner and a hotel in 15 minutes. We talked about this turn of events for the rest of the trip.

Kotor, Montenegro – Nestled in the Mountains Walking the Travertines at Pamukkale

Turkish Food – Beyond the Döner Kebap