In the Spice Market – Aromatic Chaos

We were in Istanbul for only 4 days. This, for the record, is nowhere near enough time to see everything. I of course did have my list of places to see in Istanbul. The spice market is one of these places. I read a lot of fantasy novels and it is quite common to have a scene in a crowded market. And somehow I just associate Turkey with spices, so this fit.

The market is near the south end of Galata bridge and is aromatic chaos. The day we went (and I imagine most days it is open) it was crowded. It is on the tourist circuit and shows just like the Basilica Cistern. In comparison to the grand bazaar that we visited a day later, this was insane. I could barely move it was so full.

Building to Contain it All

The building itself is a pair of long vaulted hallways that cross. Doors at both ends of each hallway let you in or out. The sign above the door states 1664. Not sure if that is the date of construction or just the founding date of the market. If that was the construction date, they have updated the building (several times). 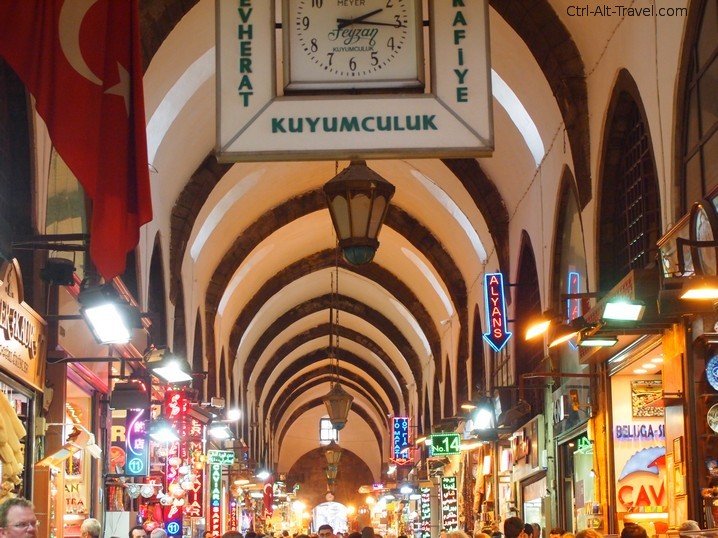 The vaulted rooms are lined on either side with stalls. Some are simple, some are ornately carved and decorated. Some have just a number and others have fanciful names like Aladdin or Hayat. What they all have in common is that they are piles high with wares to sell. Spices are out front and boxes or bags inside.

Similar to the Grand Bazaar, it is definitely noisy. People shouting and echoing into the vaults. Tourists milling about to get a look at this spice or that bit of Turkish Delight. Really more chaotic than I expected and not exactly my happy place. 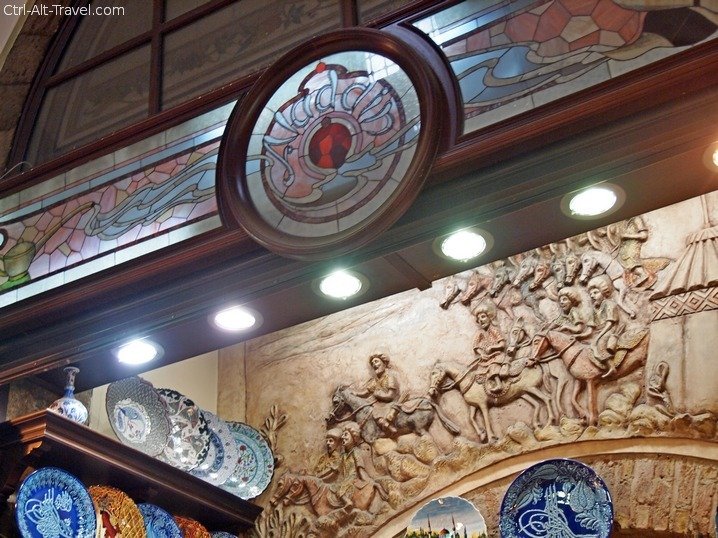 And yet the building isn’t big enough. The stalls line the outside of the building as well. Streets along the back side are nearly as crowded as inside, just with awnings instead of a roof. I did feel slightly less claustrophobic out here and was able to calm myself from the overwhemlingness of inside. I am totally happy to have gone and such, but the panic does rise when the crowds start to press in.

Oh and it isn’t just spices. In what I am learning to take as Turkish economic standard, nearly everything was on sale at one stall or another. The gold was inside the building among the spices. The olives and fish just outside. I saw sausages and Turkish Delight that makes almost some sense as being edible. Yet I saw cheap plastic toys and a store selling kitchen utensils.

Such is the spice of life

So the spices are the main star of the spice market (funny how names fit like that right?). This is what I wanted to come see. The delicate mounds of spices perfectly pointed and displayed. The smells and colors and textures blending.

In a candy store

So amongst spices were stands of Turkish Delight. I tried a piece and it really isn’t my thing. I mostly remember it from the Narnia books. That is the candy that Edward wants from the White Queen and gets him under her spell. Weird what comes into your mind, huh?

Arrakis, Dune, home of the Spice

I play a lot of video games and always have. There is a sci-fi book series called Dune which is centered around a Spice that warps people into being about to fly starships through space. The intro to the video game involves a husky voice saying the word “Spice” several times as a part of the monologue. It was hard to walk through here without hearing that in my head.

Verdict: Is it worth it?

Yes, I am very happy to have gone. If you get claustrophobic or don’t like crowds, just realize that it can be very crowded. I walked through, taking what pictures I could and was glad to get out the other end.

We did actually buy some spices, but from a store outside the main building. He kept trying to sell us tea, but we prevailed to get some spicy chilli thing. When we ordered 100grams, he kept pouring to 250grams. So they are a bit pushy there too. It wasn’t a big deal as the whole thing ended up at 10TL, about 4 euros.