Visiting the Vatican is usually on the top of the must-see list for Rome and a main reason for the Vatican tour seems to be the Sistine Chapel. We have all heard of it. Most have seen pictures and know more or less what is painted up there. While it was indeed interesting to see in person and imagine Michelangelo painting on his back several stories above the floor, I wasn’t impressed. There were however redeeming features to the visit for me.

Here are my things I liked better than the Sistine Chapel. 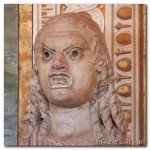 No clue why, but there are a number of these statues around the complex. This must be a specific style as they all had the similar wide eyed and open mouth look. I get that eyes are very difficult to sculpt and “no eyes” isn’t any better, but these guys look terrified and/or terrifying.

I saw a few above doors and a few as free standing busts along the walls. Anyone know more about them or this style?

The first courtyard we went through was called the Pinecone Courtyard based on it being the home of a giant bronze pinecone. This massive thing was flanked by peacocks (copies of 2nd Century ones off a Roman Emperor’s tomb) and Egyptian Lions carved from Basalt.

We heard a number of things on our Forum tour about the old Roman era bronze statues being melted down and reused or sold. I am curious how a many ton pinecone was saved.

I was having a time hearing our guide through the radios, so I had to look about for more info afterward. The pinecone was once on a Roman Temple and moved to the Vatican in the middle ages. The symbols (lions, peacocks and a pinecone, oh my) which were used pre-Christian were still important to the church, thus the re-use.

A lot of the paintings were made with shadows to make them look like sculptures. The were indeed flat on plaster, not carved. And yet, especially when in the ceilings and corners if you didn’t look close you wouldn’t notice. This effect is what becomes known as Tromp l’Oeil, though the term wasn’t used at the time.

This sort of thing was in almost every gallery as well as the Sistine Chapel itself. The flat plaster frescoes take on a three dimensional effect.

I didn’t get a lot of pictures of this, but I liked this one above. The 3-D effect is noticeable. The women are painted as if they were statues and yet still had painted wooden implements and expressive faces. The one on the right with the padel looked a bit annoyed to me. Almost as to say “sheesh, all these tourists.” The little gargoyle guy was in the next room and was painted as decoration along the border of something else big.

2) The Gallery of Maps

I like maps. I like cartoons. I like boats. So when we wandered into a gallery which had floor to ceiling maps with little cartoons of boats all over it, I was interested. The gallery is one you have to walk through to get to the Sistine Chapel, so the push of the hordes is fairly high. Don’t expect much time to explore the detail here.

The maps were painted in 1580-1585 and fascinating from that point of view too. Which cities were under papal rule and what did the world look like for them. Pompeii is missing for example.

Check out my entire post on the Vatican Gallery of Maps.

The top thing for me in the Vatican was the floors. The ceilings were often too far away for me to see the cool little details that make the pictures interesting for me. The floors however were intricate, well lit and right were I could see them.

I really liked the intricacies of the inlayed marble patterns and mosaics. The little triangles and squares which formed circles reminded me of the doodles I used to make in my notebook margins at school.

Check out my entire post on the Vatican floors.

The Sistine Chapel is the draw for the Vatican and like the most famous part of the country. However, I was somewhat unimpressed by it. I think I have just seen the pictures too many times and the actual paintings are so far away, I almost preferred the pictures. Although we got in early without a ton of people around, which was nice, going back later it was crowded and stuffy.

There are more interesting things in the Vatican than just the one chapel and its frescoes. My favorite was the floors, so heads down and check out what you are walking on.

Have you ever been to the Vatican? Did you like the Sistine Chapel? Did you notice any of these other things?

If you really want an upward picture, here is my favorite from a side dome in St Peters.

Vatican’s Gallery of Maps : Admiring old Italy And there were Waffles