Forget the ceilings, if you go to the Vatican, check out the floors.

I have pretty bad eyes. In low light and at far distances, I lose details. I can still read and operate in my life without a big deal, but when it comes to appreciating museums they are lacking. This lack was especially so for the ceilings and wall art in the Vatican. It is dim (to protect the artwork I assume), and the ceilings are WAY up there. I found that I lost so much of the detail that it wasn’t that interesting to look at. 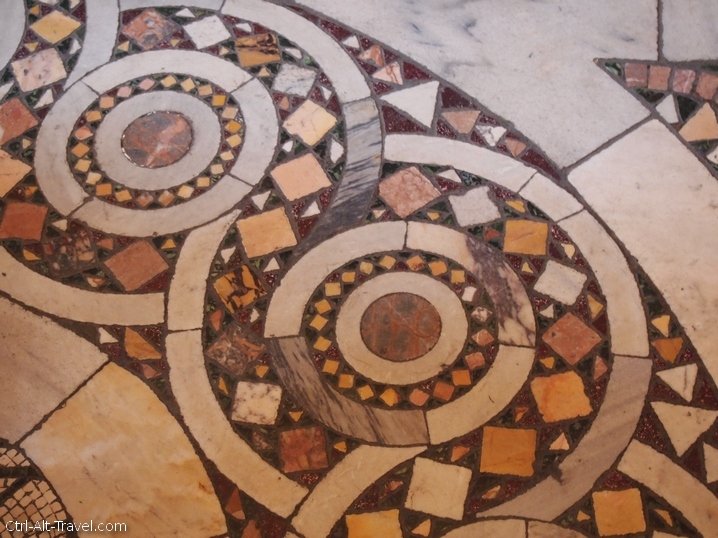 Then I noticed the floors. THEY are fascinating, and yet nearly completely ignored. The intricacies of the inlaid marble (probably stolen/recycled from the Forum) were great. I started looking at the floors for the rest of our tour and noticed the same complexities throughout the building.

Floor Mosaics in the Vatican

In a number of the museum rooms, the floors depict scenes and art instead of just simple geometric patterns. The mosaics are made of thousands of little chunks to make the picture. The mosaics at least got some respect. Most of them were roped off and protected from the feet of the passing hordes. 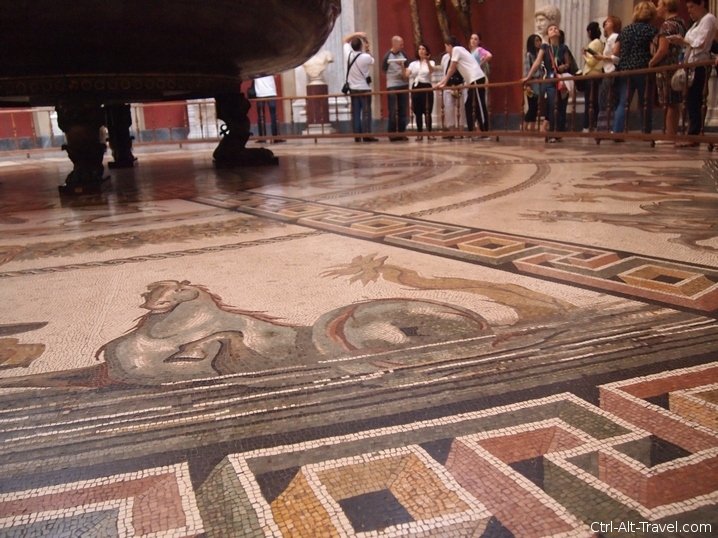 Order from the Floor

I didn’t quite understand if these were originally in the museum, or brought here from elsewhere. Probably some of both. This was apparently a floor sized menu in a dining room of a rich house. It would let guests know what the house could prepare. New dishes and specials must have been a big deal.

Although you aren’t allowed to take pictures in the Sistine Chapel, the style of floor is thankfully in other parts of the complex as well. These were in the Rafael rooms. The intricate geometric patterns intrigued me. Not only does it represent the painstaking time of a mosaic, but the pieces have to be precisely cut in different shapes and fitted. This is a technique named Cosmati after a Roman Family.

There were so many swirls and round pieces as well. I saw one part of the Sistine Chapel floor that was a solid white marble rectangle cut in swirled patterns and then more geometric patterns inlay-ed within the cut out sections. The random Star of David was intriguing as well.

In a place where so much of the art is worried over and protected from flashes, the floors are used. They are practical beauty. Appealing to me in a similar way as doors. And they have survived the 30,000 people a day.

Crossed Key Motif in the Floors

The crossed keys is the symbol of the pontificate. That symbol shows up everywhere in this place, including the floor. I found a few simple examples as well as some very complex examples. I found it fascinating that they even created the 3-D effect in marble cutout.

The various colors of marble are cut and laid to create pictures. This isn’t just a cut out forms, but nearly a painting in stone.

I have no clue how old these are, but I would expect that they date to similar time periods as the buildings themselves, so late Renaissance. The last one was in St Peter’s Basilica and so beautiful with the eagle.

First off, in the Sistine Chapel you are apparently not allowed to take pictures. The guards come and get you, our guide told us. I was curious if this only applied to the ceilings and “famous” art or the entire place. However I chose not ask the guards about the floors. They did not seem to have any sense of humor.

The other issue is that the Vatican is crowded and people are standing on the floors. It is difficult to get people to recognize that I would like a picture of a particularly fancy floor that they have ignored with their necks strained to look up. A few of my pictures thus have various shoes in them.

Look down. If you make it to the Vatican, give your neck a break and check out the floors that you are trodding upon. I found them far more interesting than just about anything else in the building.