After the floors, the Gallery of Maps was my favorite part of the Vatican. We got to walk through twice. Once very fast and once at normal walking speed. There was not much time to examine the walls very closely and part of the gallery was under construction at the time we visited as well. Even still I was impressed with the maps. The detail and little cartoons were very cool to look at. 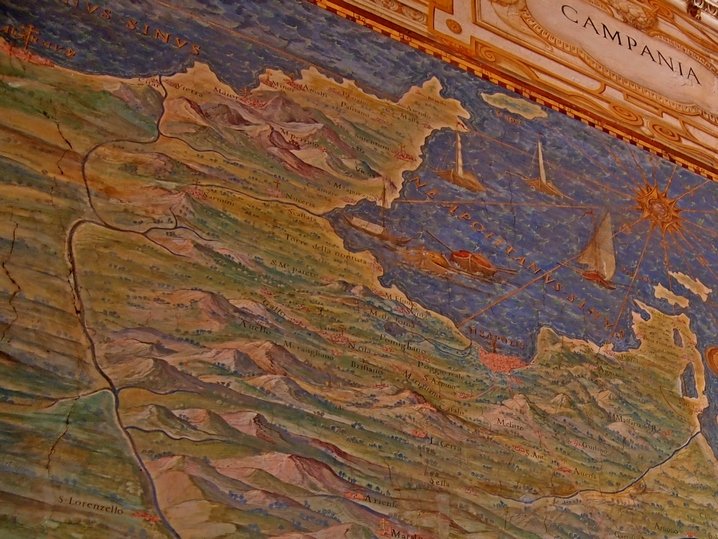 The Vatican Museum is a set of hallways and galleries lined with art and statues. Most of the art wasn’t that interesting to me. In fact, it really felt like the museum was used as a complicated waiting line for the Sistine Chapel. Despite this, there was one hallway that I really liked. It had maps.

History of the Gallery

The maps were painted from 1580 to 1585 at the behest of Pope Gregory XIII. There are 40 of them which line the hallway. And they are big, from floor to quite high ceilings. The maps are divided geographically down the length of the hallway as well. The left side being on the west of the peninsula and the right side on the east. They are frescoes, not paintings. So they have survived pretty well, although are currently undergoing cleaning (a long stretch was behind barriers when we went.)

The perspective is a bit odd on some of the maps though. Calabria (the toe of the boot) is painted in two sections, though North being to the right-ish.  Liguria (Cinque Terre area) was painted flipped, with south being roughly up. It made recognizing the areas a bit more difficult. 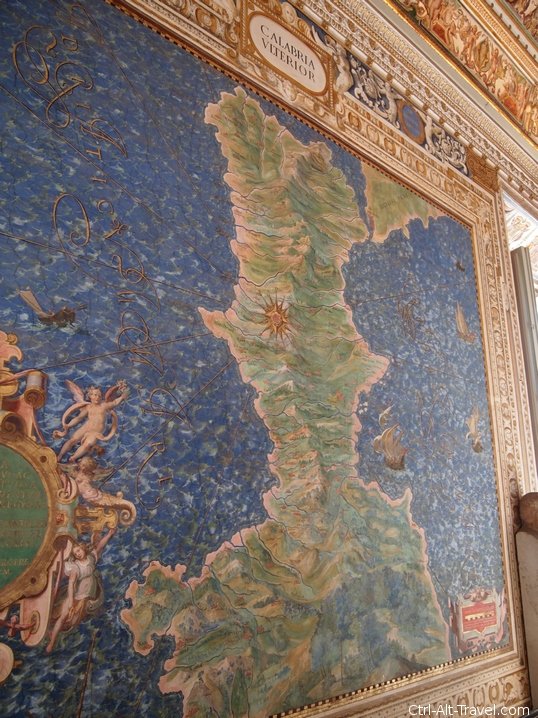 I originally thought that it was painted as if each section was viewed from Rome, though the orientation of Liguria defeats that soundly. My second thought was “wall usage”. The orientation was picked to make use of the wall as thought appropriate by the artist. The real answer? no clue.

At the time “Italy,” didn’t exist as a country. There were panels depicting areas outside of modern Italy, because, at the time, they did apparently belong to the Pope’s realm. The one I noticed had the Rhone River and city of Avenio (Avignon) in modern day France.

The detail on the maps was, both in usefulness and whimsical decoration, incredible. These were art pieces, not navigation style maps (although, maybe in the Renaissance they were.) In my search on the history, I have found references that there are pictures of complete battles in some maps, though I didn’t see any as we were taken through.  Each town is drawn as a few little buildings and churches are denoted with crosses. So the detail was certainly there, I just didn’t see any battles or sieges unfortunately.

Italy is a peninsula. So nearly every section had swaths of ocean. In all of the ocean there were boats painted with people fishing or sailing. The other part of the detail were the inset city maps of the major cities in each province.

I am not so into museums in general. The most famous art does not usually thrill me and statues can often be just creepy. I did really enjoy this gallery in the Vatican though. If I was back in Rome, I might try to find a time without the cruise ship hordes and look at the maps more closely.