Home » North America » United States » Frog Jumping Contest – Calaveras County Fair
For the first guest post on Ctrl-Alt-Travel, here is an article written by my dad. 🙂 I kind of remember both the Mark Twain story and the town near the cabin, but never connected the two in my head.

Have you ever heard of a frog jumping contest? I have to admit I have not since I grew up in Upstate New York. But my wife’s family is from California and they have a cabin in the Sierra Mountains not far from a place called Angles Camp. Now Angles Camp originated during the California gold mining days in the mid 1850’s. When the gold miners were bored and had time on their hands they use to bet each other that, … “My frog could jump further than yours.”

Mark Twain made the Angles Camp and the frog jump world famous in his short story, “Celebrated Jumping Frog of Calaveras County.” You can read the complete story here. 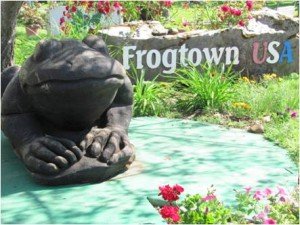 Although I had read the Twain’s story, been through Angels Camp several times and heard of the frog jump contest at the county fair I had never actually been there. In May 2011 my wife and I were visiting family and the timing was perfect to attend the Calaveras County Fair…yea!…and my first frog jump contest. You can learn more about this year’s event at their website.

I have to admit I didn’t know what to expect. I mean, how far can a frog jump anyway? Well, I tell you, they can jump pretty far. The basic rules are: Each frog jockey (yes, they call them that) puts his/her frog down on the mark. When ready, the frog jockey can do anything to make the frog jump. The final measurement of distance is for the first three leaps. However, the frogs don’t necessarily go in a straight line. Several went forward and then back two jumps…not great for a distance record.

In the jump trials each frog jockey had to opportunity to test out several frogs a number of times. This little kid was fun to watch. The frog jump trials went on all morning. 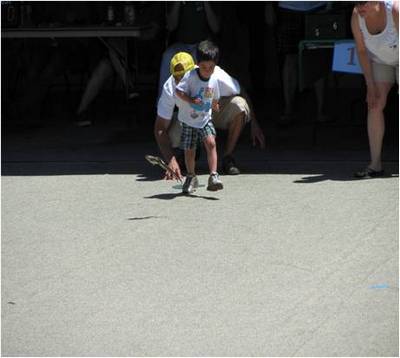 The contestants were very creative in naming frogs. For example: “It’s Cheaper to Leap Her” or “It Tastes Like Chicken”. Then they got serious about the frog jumping contest and the finals were going by afternoon. Would you like to hazard a guess as to the winning distance for May 2011?Well, it turned out to be “It’s Cheaper to Leap Her” with a leap of 20 feet. That was a little short of the worlds record of 21 feet 5.75 inches by “Rosie the Ribiter”

I have to admit I was flabbergasted at how far these frogs jumped. But also fascinated by the contest and as I’ve mentioned, I had never seen such a thing. It was a fun experience and a great day of watching frogs jump.

Oh, if you want to get involved the have frogs for rent. So you too can participate in the great frog jump. Sort of a piece of history when you think about the gold rush days, the 49’ers, Mark Twain and Angles Camp. I would go again in a heart beat. If frog jumping isn’t your thing they have many other interesting exhibits, country cooking contests, old machinery, a rodeo, something for everyone of all ages.

Thanks again to my dad, Nelson Couch, for the article. My parents travel more than I do at the moment and have visited me several times. My first travel experiences were due to them and for that I am doubly thankful.