One of the classic postcard pictures of the Thai islands involves the longtail boats. Wooden boats with brightly colored hangings driving by a motor on a very long stick behind. You don’t get very far in the island area without seeing (or riding in) them. I was fascinated by the images and sense of the boats.

We spent three weeks in Thailand last winter and all of this time was in the south around the Krabi area and Koh Pha Nang. This is the prime area for watching (and riding in) longtails. 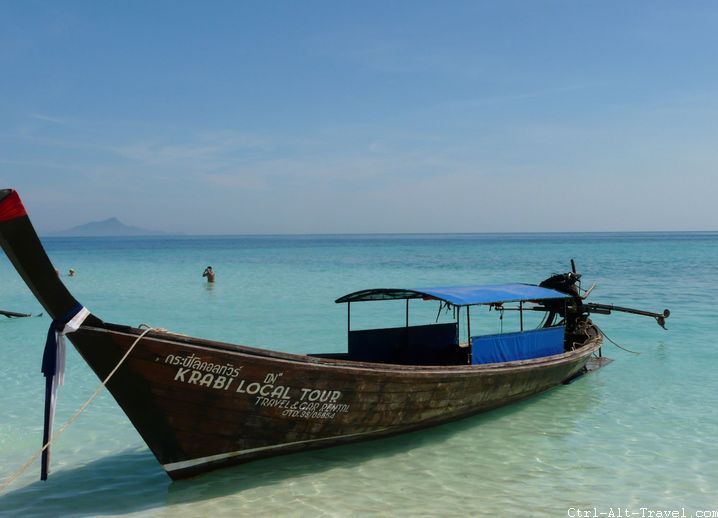 We had just come from Cambodia to Krabi in southern Thailand. Several weeks of constant cries of “Tuk tuk?” in Siem Reap led Ali and I to calling all local transport a “Tuk” of some form. The longtails are then “Boat-Tuks”. In many many areas, they are the only way around coastlines that are not straight and more often than not are backed by super steep cliffs. We took one from Railay Beach to Ao Nang, not more than 20 minutes on the boat, but Railay doesn’t have any roads. They are more than just transport though. I’ve seen them selling food, running tours and hauling garbage in addition to being local water taxis. 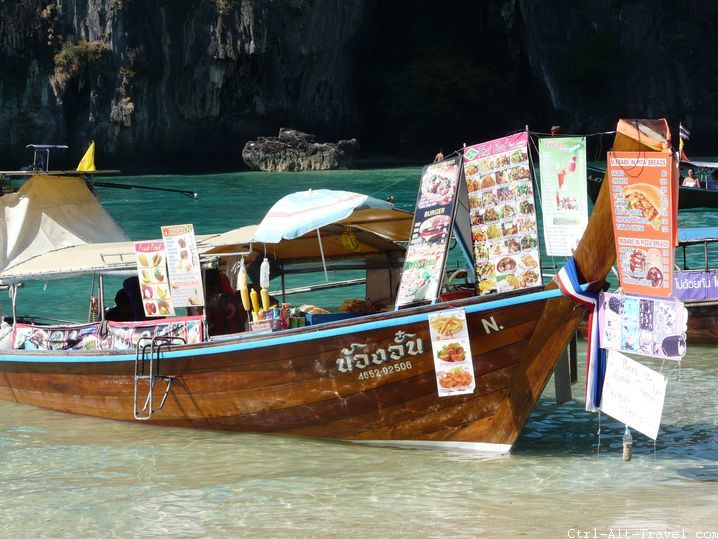 In some areas, the longtails are used as tour boats that take you for hours out into the shallow seas to other pretty islands and back. Around Krabi and Ao Nang there are tons of islands. Those steep jungle covered cliff-y islands that make you think of pirates or James Bond. (There is indeed a James Bond Island.)

As you might expect, there are plenty of companies that offer tours of the local island chains. They then often have two choices, a sped boat or a longtail. Definitely pick a longtail. It is the slower, and perhaps more crowded, option, the wooden seats will numb your butt after an hour or so, but it is totally worth it.

It may feel like doing the touristy thing to take these boats, but watch out in the bays as you go. Locals use them as much as tourists. Watch for the men fishing from them or using them to transport garbage around. These are essential fixtures of the area. Enjoy your ride and remember you will feel your butt again later, even if you can’t at the moment.

As near as I can figure, the boats are named “long tail boats” due to the motor and propeller setup. At the back of the boat is an engine which looks ripped out of a motorcycle or super heavy riding lawnmower. It is mounted on top of the boat on a swivel joint. The driver has a handle that he can, using main force of his own weight, shift the motor in different directions. The point of that is the tail part. Out of the back of the motor is a tube that is several meters long ending in a propeller which is dipped in the water.

So by mounting the motor above the water, I expect you don’t have as much of the issues that affect a normal marine motor. That being, you don’t have to seal it as well. I don’t know this for certain, but that is my guess. Less sealing means easier maintenance and more common technology to the two stroke motorbike engines that seem to drive everything in South East Asia.

Having the propeller on a long stick also means you can maneuver the boat more radically than an outboard motor. I watched many times a driver swing his boat around sweeping the tail back and forth. And the last reason is as important, propellers on a stick like that do not need a deep draft.

I don’t know all of the geological reasons, but while much of the coast around Krabi was steep majestic cliffs, most of the beaches were super shallow. You got a long way from shore before the water got up over your waist. And of course that distance changes pretty radically with the tides. A pier that would be usable at high tide could be a hundred yards from the waves only a few hours later.

Long tails with their shallow drafting propellers seem to be able to park anywhere and do. But be prepared to get your feet wet. Shallow drafts aside, you are probably jumping over the side and wading the last hundred yards almost anywhere. This is especially funny to watch tourists carrying luggage above their heads.

So the shallow draft, the easy maintenance and their flexibility makes the long tail boats ubiquitous in the area and builds the iconic postcard image we have of southern Thailand.

Venice : City of Fantasy and Illusion Tuk-tuk-tuk : Transport in Thailand