We had a brief stop in Nice on our way from Brussels to Italy. Ali and I had both been to Nice previously, but long enough ago that no memories were helpful. We came to Nice on a night train and only had one full day and an afternoon to explore. We were pretty burned out from the train so wandering is just about all we did in Nice. Here is my look at Nice from our perspective as wanderers. 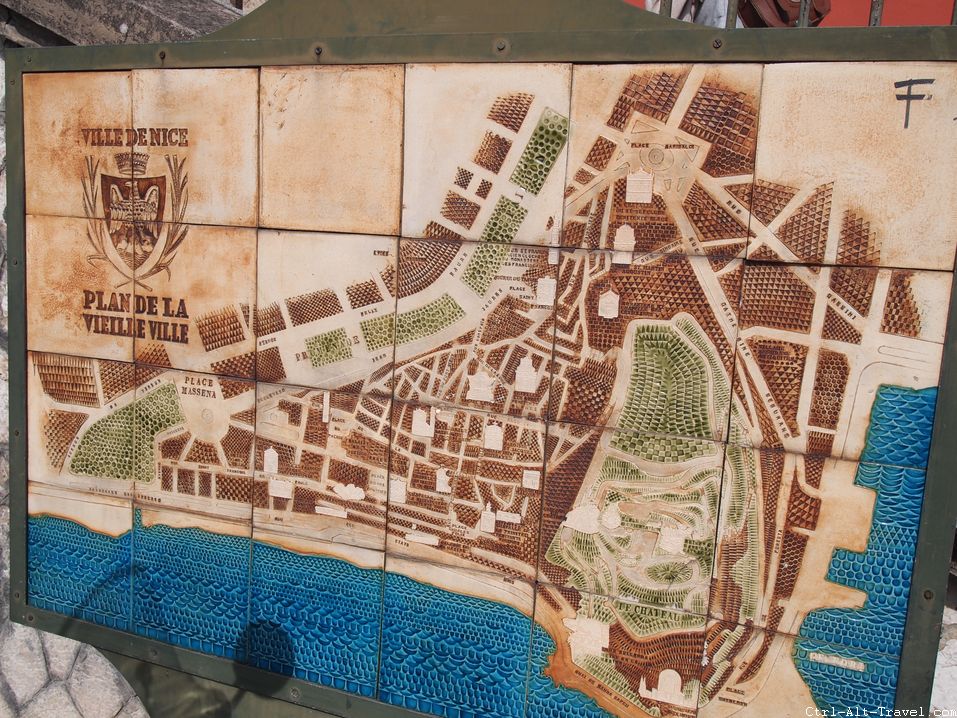 Old Nice is a fairly small section of town composed of narrow windy streets and filled with restaurants and shops. There is an open square around a church and another for the Cathedral. There are plenty of restaurants and cafes in this section, but they come with the tourist prices. Not a tragic thing given you are coming to a tourist city, just be aware.

The market area is between a double row of buildings near the seaside on the edge of the Old Town. There are restaurants here as well.

Castle Hill rises up to the east of the Old Town and runs down to the beach. It separates the old town from the port area. You can get up either by lift near the beach (just beyond the market area) or several sets of stairs scattered about. Check out my full post on Nice Castle Hill for more on what is up top. 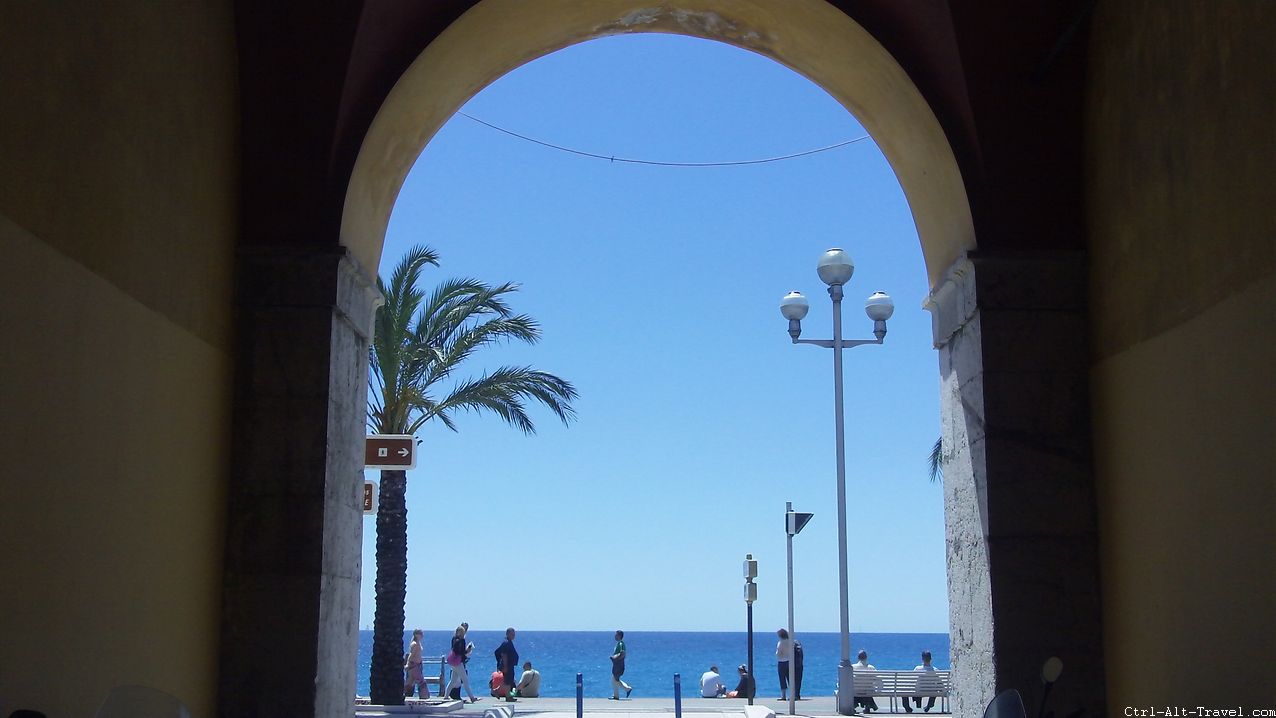 I put the historical stuff first, but who am I kidding, most people are probably interested in the beach. The beach is a long pebbly beach, which arcs along the town. The beach is accessible from numerous stairways down from the walkway and road.

The promenade is a nice place to walk or jog. There was a bike lane as well. The day we were there a part of the promenade had been blocked off with tents for a exhibition of regional Italian food, so they do use it for other things as well. Just check out what is going on.

Finding food that is simple and not too expensive is one of the challenges we face while traveling. Nice was ok, but not stellar, in this respect. The town is stylish and resort-y which is reflected in the prices we saw. We don’t like the fanciness of French food, but thankfully there is a plenty of Italian influence. Pasta, Pizza and Gelato were on many streets.

Alcohol seemed expensive. No clue why. Maybe just a shock coming from Belgium and living in Germany, but 4-5€ for a small beer in a restaurant seems high to me.

Around the Train Station

North of the train station is the stop called Liberation. We had good luck finding sandwich shops and cafes even on the main street in this area. There also appears to be a line of market stalls as well. There were benches for a picnic between every few stalls. From this toward the station and into town, there seemed to be plenty of side streets with stuff on them before it became a shopping district closer to town.

In the station, there seemed to be only a baguette sandwich place. It was ok, but if you want more complicated snacks for your journey, plan ahead.

The square is lined with restaurants and bars. Look at the menus and take your pick. It felt a bit more upscale, but the one night we ate down there the food was fine.

After dinner once night, we wandered around the old town digesting. We stumbled into Cathedral square. I counted 3 gelaterias on the square and a number of Italian places on the streets leading away. This was on par with what we found in the rest of the Old Town. Again, check the menus before making a choice. You are in the historic center and will pay prices appropriate. We did see a few sandwich places for take away which were cheaper.

The train station is north of the old town. At the time of writing, there was plenty of construction around the station. Turn left out of the front of the station and walk a few blocks to get to the Tram stop. The tram runs down near the old town and up into the hills. Plenty of the bus lines stop off to the right side.

Transport tickets are available at every stop of the tram in machines. We were also able to buy tickets from a bus driver. If you plan to move about town a lot (for example if your hotel is far away from the old town or beach), look at the day ticket options.

There are bus options out to the airport. The city itself looks pretty well covered by buses, but check your specific area. We used the tram a lot and except for one day were it was not working (they provided buses to cover the route) it ran often and was pleasant and efficient.

Nice is a large city in the French Riviera and consequently a fine place to base yourself for exploration.

Tiny city-country on the sea. About 20 minutes by train from Nice. Monte Carlo Casino is probably the most famous sight. Other sights include a Maritime Museum with ship models, an aquarium and a castle with a changing-of-the-guard routine.

Nice is a good base for exploring the rest of the Provence. I saw plenty of signs for bus tours, but check out train and bus schedules. Most of these should be doable on your own. Eze, Villefranche, Cannes, Aix en’Provence are all nearby.

Nice Castle Hill : Looking Down on the Riviera From Above