Venice : City of Fantasy and Illusion

Venice is a fantasy city for me. It leaps directly out of the pages of a book. Actually it is probably the other way around, the intrigue and romance of Venice has influenced so many books. One thing that links the fantasy and reality is the concept of Illusion. Foggy dark alleys, confusing sounds with water and voices mixing, masks and grand buildings all mix in this city of canals. You are never really sure if the next turn will be a dead end or a wide bright square filled with pigeons and gawking tourists.

It is easy to make a turn and within a few seconds be out from the streams of people and onto a small bridge alone. The rhythm of the water is everywhere in the city and can be quite soothing. This past trip to Venice, I spent a fair amount of time just staring at the reflections of the canals thinking.

The reflections and the thought fit into this sense of fantasy as well. Imagine in some respects a fun-house turned on its side. Mirrors are on the floors and yet the passageways still wind about. Illusions are always totally in the mind, so the thinking and pondering aspect is part of it. 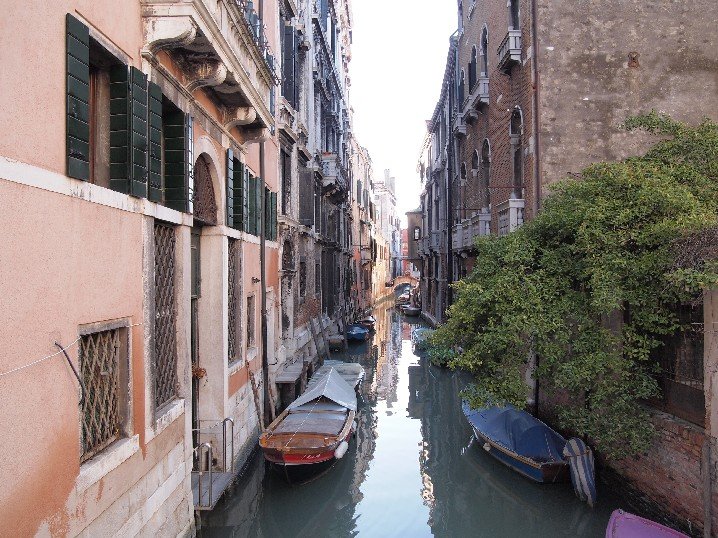 Beyond all of the philosophical mumbling, the architecture in Venice reflected in the canals is neat. Each canal is pretty much the same in general terms. Narrow with looming buildings on either side and more often than not another bridge in the distance. Boats huddle along the sides between doors perched right above the waterline. And yet each is different as well. Some buildings are well taken care of while others are crumbling. A small square floods one canal with light while another basks in the shadows. It doesn’t take much imagination to see a pair of figures chasing each other across a distant bridge and wonder about their story. 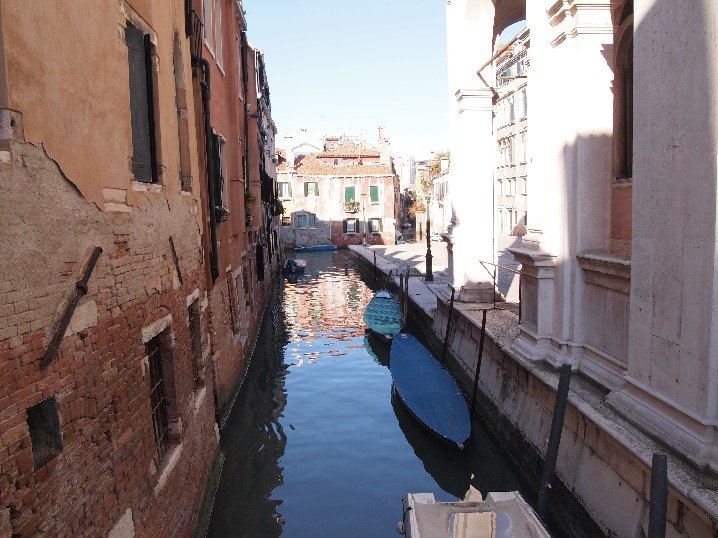 It goes beyond the architecture. Venice weaves her spell of illusion on the people as well, both resident and visitor alike. Especially at Carnevale, masks are everywhere. Costumed performers decked out in full regalia of a bygone era mingle with the tourist hordes. Masks are a part of the identity of the city and a part of the feeling of illusion. Sounds, sights and even your sense of direction gets confused here.

Even in the bright sun Venice can have a fantastical sense, for with brighter sun comes darker shadow The play of light and shadow can bring the sense of illusion just as well as fog can. Things hide in the shadows even when they may not intend it.

I really like this picture. The woman is probably just happy to not be in the blinding sunlight, but it plays into my point so nicely. The musicians just scream “pay attention to us” and yet my eye is so totally drawn to the woman standing in the shadows. There is a story here, even if that story is purely in my own mind.

I seem to only end up in Venice at Carnevale, which is usually in the fold between winter and spring. So I have impressions of masses of people on the well trodden pathways between the majors sites and the train station. The city is so atmospheric even when you sneak away from all the people. I have memories of fog enshrouded alleys where the echos of lapping water and far off voices turn the dim grayness into confusion. Last time I was there, I happened to get a nice sunny February day. So many shadows and reflections off the water showed me a different angle of the waterborne city. That angle was still filled with fantasy and showed that even in full sun Venice could work its illusion magic.

Set in a Venice-like fantasy city. A thief and his band try to make the perfect score but get wrapped up in something bigger. Wonderful characters and world-building, the illusion aspect is strong.
Continuing the theme of thieves being associated with Venice. This is a Young Adult book about a pair of orphans in Venice. Not quite fantasy but definitely fiction.