I really enjoy street markets while traveling. They can be some of the most interesting experiences and some of the cheapest eats all wrapped into one. We went to two of the several markets during our time in Amsterdam. Albert Cuyp market is one of the most well known and largest. Ten Katestraat Market was just a stop up from our apartment and a great place for a quick snack. 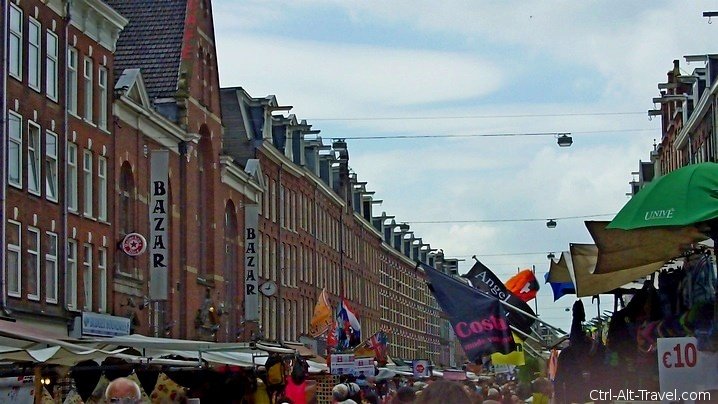 The Albert Cuyp Market is over 100 years old and is in the center of the Pijp district. I was calling it Peep at the point we were walking around, but it is properly pronounced like Pipe. The area is pretty neat looking with restaurants and bars along the side streets that I saw. The architecture of the buildings along the street looks fairly typical for Amsterdam as well.

We talked to a bartender near our apartment who said he lived in the district and recommended a restaurant around the corner from the market ( which we didn’t get a chance to try) so it at least seems more like a local’s district than some of the more heavily touristed center of town. 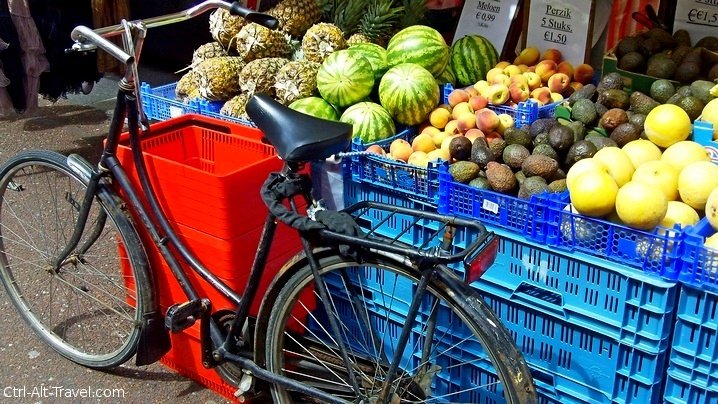 So the main reason I like markets is the cheap eats potential of them. We had just come from lunch (we needed a quiet sit down place) so were not hungry to try anything, but it all looked and smelled good.

We saw a stand serving Vietnamese rolls and dumplings for a few bucks a piece. Two separate stands doing Poffertjes which are tiny dutch pancakes which remind me of Schmarrn. And a number of stands offering sandwiches of all description.

The rest of the market is a mix of all kinds of things. From clothing to toiletries, lingerie to chocolate and all manner of fresh fish, veggies and fruit. Some of them stall mixtures are odd. One stall has pancakes while the next has legless mannikins selling corsets. A chocolate stall may have the unfortunate placing of being downwind from a fishmonger. These all end up building the character of the place.

I almost never have interest in the stuff that is on offer (my bag is heavy enough as it is), but the food and ambiance is worth the walk.

The market is open Monday-Saturday from 9am – 5pm according to their website. And can be reached on one end by the tram lines 16 and 24. Tram line 25 stops near the opposite end.

The second market we went to in Amsterdam was just a stop up from our apartment. The Ten Katestraat Market is not as big as the Albert Cuyp, but with a lot of similar things. It felt much more of a local market. It had only a few blocks worth of stands, but the same kinds of things as in the larger market.

Our stop at the Ten Katestraat Market was actually for lunch, so we had the chance to eat. We stopped at the first stand that was serving food. The side of a butcher style stand had a grill and a row of buckets with fresh meat behind signs describing their tastiness. For 3Euros a piece Ali and I bought had a Hot Chicken sandwich. This meant a generous scoop of chicken with spices grilled and put on a baguette roll with a choice of chili or garlic sauce. (We got one of each. I liked the chili sauce better.)

After our sandwiches, we walked through the rest of the market. I didn’t see any poffertjes or waffle stands, but I did see a Vietnamese stand just like at Albert Cuyp.

7 and 17 trams stop at Ten Katestraat. The market is right at the stop. Tram 17 is also the one that runs by the Anne Frank House. This market is a few stops away from the center on that line and certainly cheaper than the places around the tourist stop.

According to this site (in dutch) the Ten Katestraat market is open Monday-Saturday from 9am-6pm.