There is not a lot of historic old buildings in Rotterdam. Historic Delfshaven is an exception.The neighborhood of Delfshaven has more of an old world charm than the modern city center of Rotterdam.

We went twice during our trip to the city, both times to visit the city brewery which is there. The area is not a “living museum” style of historic, but more of a restored feeling of what it might have looked like and filled with modern shops and cafes. 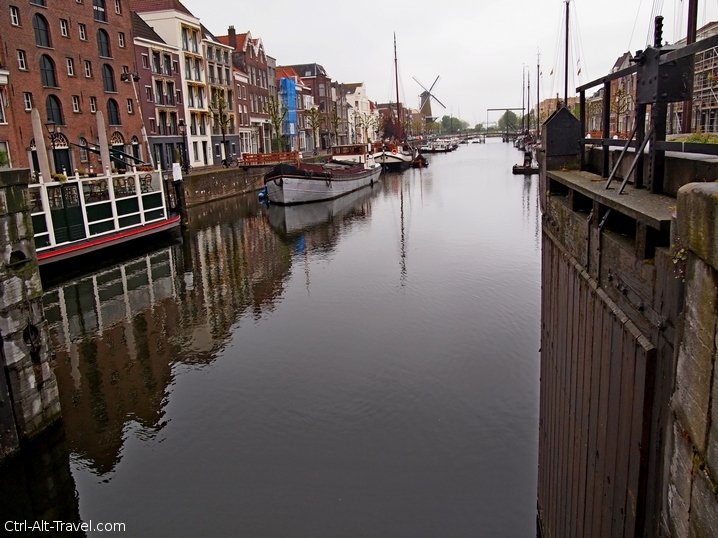 According to the sign at the base of the harbor, the original channel was dug in 1389 to be the harbor for nearby Delft (hence the name). By the 1600’s it was a popular East India Company port and was the launching off point for the Pilgrims in 1620. It flourished as a port even into the 1800s, though turned to Rotterdam for protection and support in 1886.

Today the historic Delfhaven is an area of shops and cafes and home to a windmill and a number of what look like restored buildings and older style boats. According to the plan on the sign, the mill was used for a distillery, which is always a good thing right? It is also where de Pelgrim city brewery is located, which is why we were there. The days we walked through it was cloudy and cool, so despite being the month of May very few people were around. I can imagine that it is a popular place in the warm summer months.

Getting to Historic Delfshaven

Delfshaven is an area of town as well. It has its own metro stop of the same name on the A,B,C Metro lines as well as Trams 4 and 8 and tons of modern shops and doener places on the main street from the stop toward the historic area.

We were the guest of Rotterdam Tourism wandering about. All opinions and quirky observations are mine alone. Weather and shaky pictures are no one’s fault.

Behind the Scenes at Rotterdam Zoo The Best Sandwich in Brussels